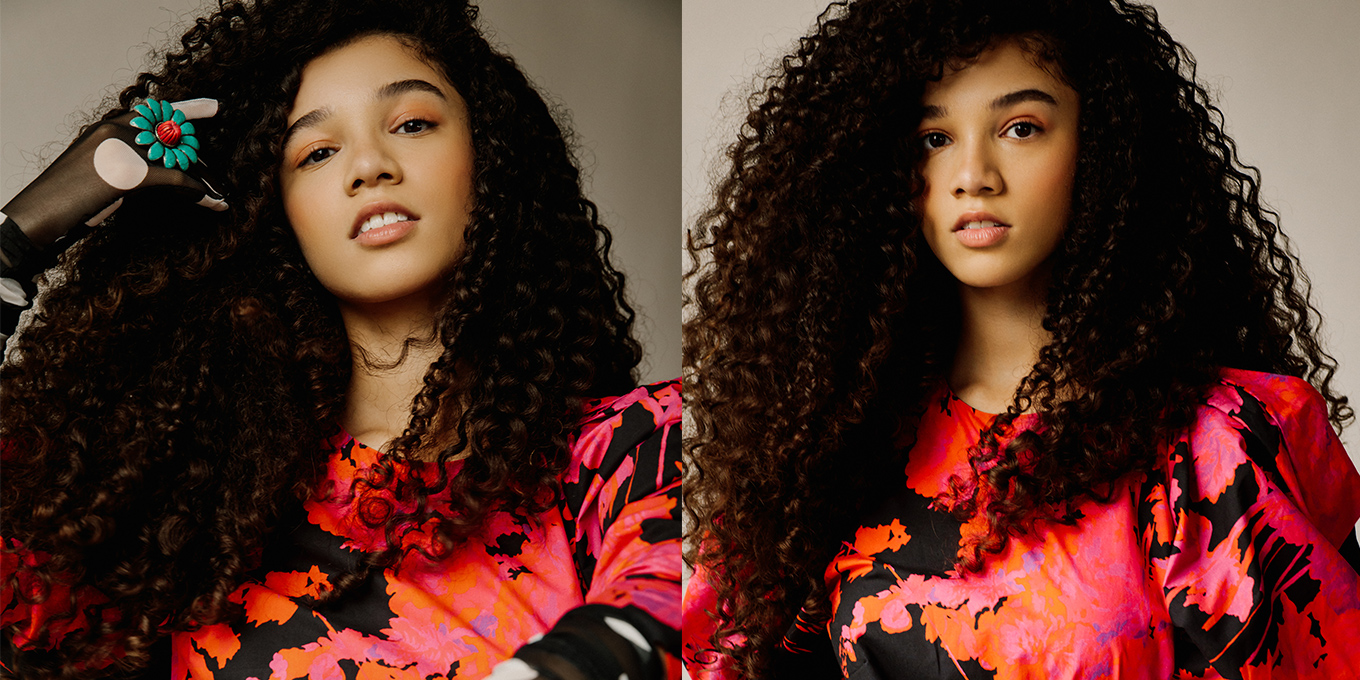 Is there a book series released in the last four decades more beloved than The Baby-Sitters Club? Arguably not. Since debuting in 1986, the adventures of Stoneybrook, Connecticut’s most reliable sitters (Kristy, Stacey, Dawn, Mary Anne and Claudia, for the unfamiliar), each of whom have distinctly charming characteristics and personality traits, have endured.

Vancouver-based actor Malia Baker grew up reading the books. The 13-year-old is an avid watercolour painter, so one might be quick to label her as a Claudia; however, Baker is a self-proclaimed Mary Anne, which is fitting, since her breakout role in the new Netflix original series is just that character. Also fitting is Baker’s personal passion for social justice and activism. The latest instalment in the BSC universe sees the gang addressing topics like wealth inequality, mental health and LGBTQ+ rights.

We caught up with Baker about her role on the show, her passion for social justice and her favourite on-set memories.

How did you discover that you wanted to act?

I started a couple of years ago. It’s all such a new experience, I’m learning new things on set and off set. I had been doing theatre for a very long time. When I was around 10 years old I was like, ‘OK, I don’t want to do this anymore. I don’t like the dancing portion of this, I don’t like the singing portion of this. I’ll just go into acting!’ That transition was really cool because there are such different techniques and different skills that you need to acquire for both of them and I found that I fell in love with acting way more than I did theatre.

What was the audition process like? Did you go in for Mary Anne?

The audition process for Mary Anne was the longest audition process I’ve ever been through. That was my first audition with such a big company [Netflix]. I first auditioned with a self-tape, and of course my mom and I were running around the house with excitement, because it’s Mary Anne Spier from The Baby-Sitters Club. The second audition they asked me to do a video call and I happily agreed. For the third audition, they asked to fly me out to L.A., and of course I agreed – it’s Netflix! I went there and did my thing and everyone was so lovely and nice. It was really surprising because we got told at the final audition [that we got our parts], which is super rare. That gave the cast a bit of leverage because we got to exchange phone numbers and get to know one another before filming.

How did you all bond on set?

We all just kind of clicked. At the final audition, we literally have pictures of us all sitting next to each other on the ground, the five of us just talking about whatever. On set, with the leverage of being able to text each other a couple months before filming, we were able to just bond right away. Being on set, you’re almost forced into a bond. We’re all kids, we’re all very new to this. Some of us have been doing it more than others but we’re all just learning things together. I found it was so much fun working with the girls my age especially, that have interests like I do. I think we’ve definitely all become a little BSC family.

Do you have any favourite memories filming all together?

We had two birthday parties and surprised each of the girls for their birthdays. For one of them, we hid inside of her trailer in her bathroom while we decorated the rest of her trailer. It was an early morning and we came in even earlier than her, and she was so surprised when she came in. Catering got her cake and after that we went to the movies and saw It Chapter Two. I am not a scary movie fan but I did it for her. It was honestly terrifying, but I learned to like it afterwards, I think she got me hooked in the horror realm. We ate pizza and it was so much fun.

How do you relate to Mary Anne?

Reading the books growing up, I knew that I related to Mary Anne the most, which made auditioning for her even more exciting. I feel like all the girls relate to their characters very strongly. Mary Anne and I are both shy deep down, but I’m able to overcome that while I’m acting. We’re funny without even knowing that we are and we love our friends more than anything. I found that Mary Anne, while I was playing her, is a leader in her own way and she just needed to discover that. In the last two episodes she really discovers she is a leader and she doesn’t have to be as bossy as Kristy or as much of an activist as Dawn, but a leader in her own Mary Anne way.

Which trait from the other girls do you have in real life?

I am an activist like Dawn, I can be bossy like Kristy… I love Claudia’s art, I’m an artist as well. Stacey is very responsible, and I feel like I am pretty responsible.

What was your favourite scene to film?

I loved filming the last two episodes at camp because it felt like we were actually at camp with my best friends. One of my other favourite scenes to film was in episode eight. We were all together at the wedding and it was the final scene of that day and the final day of shooting. There was a dance party scene so they just told us to dance however we wanted to. It was so much fun because it honestly felt like we were at this wedding, except there were a bunch of people standing around with cameras, and we were all in fancy dresses and there was cake.

Episode four, “Mary Anne Saves The Day,” specifically seemed like a complex and at times emotional episode to film. How did you prepare for it?

I felt so honoured and still feel so honoured to be able to represent that episode and that issue, which a lot of young people face today. When I was preparing for the episode, I remember when I first read the script, I got chills all over my body. I was like ‘Yes! I get to do this!’ When I first met Kai – oh my gosh, she’s so sweet – I think I fully understood how that specific scene in the hospital was supposed to go. I talked with the director, I talked with the writers about how they wanted me to do things and I was able to add my own little spice to it. I found preparing for that one was a bit easy for me, because I already feel so passionate about those issues, so I honestly just imagined, ‘How would I do this in real life?’ When I was younger and came out of my shell, I tried to incorporate that [experience] in, because Mary Anne fully comes out of her shell and is able to use her voice, not only for herself but for another little girl.

You recently spoke at a Black Lives Matter protest in Vancouver. Who or what inspires you to speak out about injustices?

It’s kind of this drive that I’ve always had. At school, if someone was being bullied I was the kid that would stand up for them. If I were being bullied, I was a shy kid so I knew people would stand up for me because we had each others backs. I feel that that comes from a lot of girls supporting girls as well. I found that the girls in my old school always supported one another and I think that’s where my love for being a feminist is all from, as well as from my mom and my sister and my aunties. I feel that my drive for racial justice in particular comes from experience and all these stereotypes that most of us have had to deal with our whole lives. I’m really hoping that one day I can fully become a part of that change.

What was it like to film your first big role in your hometown of Vancouver?

There was definitely a sense of comfort. I feel like if we shot it in L.A., it would have been a total feeling of no experience whatsoever, but in Vancouver I was like, ‘Oh, I know where this road goes, I know where I’m going.’ It was really fun because I got to show all the other girls my favourite spots around town. I got to be a little tour guide for them.

Netflix’s ‘Cursed’ Puts a New Spin on a Familiar Tale