The Gossip Girl alumn is officially a comedy star. 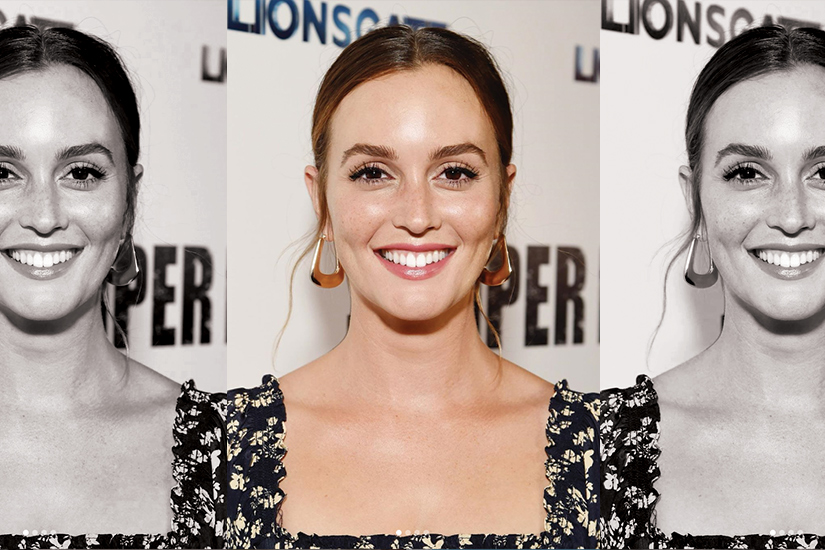 When I meet Leighton Meester in a Toronto boardroom at the end of September, she looks right at home: She’s sitting back in a chic floral dress after a long day of press, with a fuzzy blanket (the type you immediately feel compelled to touch) draped over her legs. Outside, it’s chilly and grey, a true sign that the Canadian winter is, indeed, coming, but the L.A.-based actor doesn’t seem bothered. It helps that she had a rare weekend off with her family – her husband Adam Brody and their daughter Arlo – in a city she’s become well acquainted with over the years. “My husband has worked here so much, I’ve actually gotten to know Toronto – at least the food,” Meester says. “We made some pizzas at our friend’s house last night and took a nice walk. It’s very pleasant [here].”

The Gossip Girl alumn is in town to talk about her latest project Single Parents. Meester stars in the sitcom, now in its second season, as Angie D’Amato, one of the moms in a group of, well, single parents who are entirely (yet understandably) too involved in their kids’ lives. This season (airing Wednesdays at 9:30 p.m. on Global) also finds Brody returning for a guest appearance as Angie’s no-good ex. We sat down with Meester to chat about the show, working with her husband and why she doesn’t believe in “balance.”

What can Single Parents fans expect for season two?

Angie – me – is dealing with the repercussions of coming face to face with [her son] Graham’s dad. He may not be as bad as she’s built him up to be in her mind over the years, yet she still has a lot of rage that she’s got to let out. So she writes him an email, and then maybe they get back in touch, and then maybe he does a few episodes of the show and some things happen that are unexpected. We may have a fire, we may have a love story diversion. Her whole journey this year is about opening up and seeing if maybe Graham should meet his father. She’s discovering that the mythical person that left her on the side of the road is maybe not as bad as she thought. It’s kind of intense, but somehow we frame it all in a very funny way.

Can you tell me a little bit about what first drew you to the show and to Angie?

I mean, really, Angie, is what drew me into the show in the first place. And definitely the creative team, J. J. Philbin, Elizabeth Meriwether and Jason Winer, are people from New Girl and Modern Family, which is very much like how I would describe the show. It’s got a little bit of both. I knew their humour and their support is always going to mesh together, no matter what. And it’s a fun, exciting and very humbling experience to be playing such a silly absurd and yet vulnerable and grounded single mom.

You’ve been doing more comedy recently, which is different from what a lot of fans have come to know you for. What started attracting you to comedic stories and how are you enjoying it?

It really was when I did this movie Life Partners, actually with Adam. I had done a couple of other things throughout the years, but it was this movie where the environment was so amazing. It was with my love, my person, who was my boyfriend at the time. And then every single person on the set was a woman otherwise. It was a really amazing collaborative experience. I felt comfortable and got to add whatever it was that I felt would bring more to the table. After that, I did a show called Making History. It was short-lived, but it was so much fun because it was kind of like anything goes. I felt so excited for each episode, and everyone that I was working with was so smart and funny. That’s how it started, and then I sort of got the hang of it, realizing how comedy is made on TV. Because it’s so different from drama. I felt more and more comfortable, more encouraged and more supported by the people I was working with on that show. So once I knew I was going to look into doing another show, I was like, “I kind of want to do another comedy.” I feel like that’s a world that I want to live in, to be able to go to work and just laugh and enjoy myself, and not to mention the fact that it is really a collaborative experience on this set in particular. I get so much say in what I say, and do, and wear, so it’s really nice and it’s good to go to work and have that, as opposed to drama, which has its own appeal, but it’s so much more, you’re living in that for the day.

Obviously, you’ve worked with your husband before and now he’s appearing on Single Parents. What’s it like working with him?

It’s great. We drive together, save on gas, share a trailer, hang out. It’s really nice to have him there, but it’s also kind of weird in a way. We’re hanging out without our kid, and I’m sort of seeing him from afar in a different way. It’s like seeing your partner at a party. You’re like, “I’m so used to seeing you in our kitchen or face-to-face waking up, and then suddenly I’m seeing you from afar talking to somebody else and I’m like, ‘You’re cute.’” And talented and smart and charming and all of those things.

Here’s a #throwback for Angie! Next week, @itsmeleighton’s real-life husband, Adam Brody, is back as her #SingleParents ex Derek! #CastFromThePast

What have you learned about motherhood from playing Angie?

Angie has a very unique experience. Her son is her whole world and she’s that for him as well, because he doesn’t have a dad or another parent there. It’s really hard for her, but also she is needed and that that’s something that gives her validation. On my end, I would say that I have the tendency to worry a lot. She doesn’t have room for that, she has to get things done and take care of her son and everything else, and then herself last. She lets him make his own mistakes, which I think is a very hard lesson to learn as a parent – not being too worried about every little thing and also letting them learn their own lessons, which is very tough.

You’ve said that you don’t believe in balance, especially when it comes to being a working mom. Why do you feel that way?

It’s funny because a lot of people kind of shy away from that word as of now. Whatever, it’s not a bad word or anything, but somebody said, “What do you do about the life-work balance?” And I was like, “Oh, I don’t think I do. I don’t think I know it.” And I don’t think it’s real or possible. But what I will say is that having a kid, having a family, is the most important thing to me. It puts things in perspective for me; what used to be important to me is very different now. I can go to work and hang out and meet new people and it can be an exciting, wonderful experience. If I have a bad day, I can walk away from it and I can go to my partner and whatever. But if it’s not a great day at home, like if my daughter’s not feeling well, I can never have a good day at work. Even if I got to work and my kid was sick at home and they’re like, “You’re getting a promotion!” It just puts things in a different light. So as far as the balance, no, I just don’t feel like I’ve got it. I don’t know.

As women, we definitely work because we mostly have to. And sometimes we don’t. The truth is that I want to work, I also feel like I should work, I have to work. It’s not bad for my kid to be seeing me work, so I like it. I’m also in a lucky situation where I can go to work and then when I have time off, I really have time off. It’s something moms struggle with. Then there’s the fact that we go, we do so much more of the cooking and the cleaning too. We really do. In my house, we try to split it but ultimately I end up doing more of it. I think we just are in that role, not to mention the birthing of the baby that came to be. That’s the other thing that we’ve got to do. There’s no other way around it.