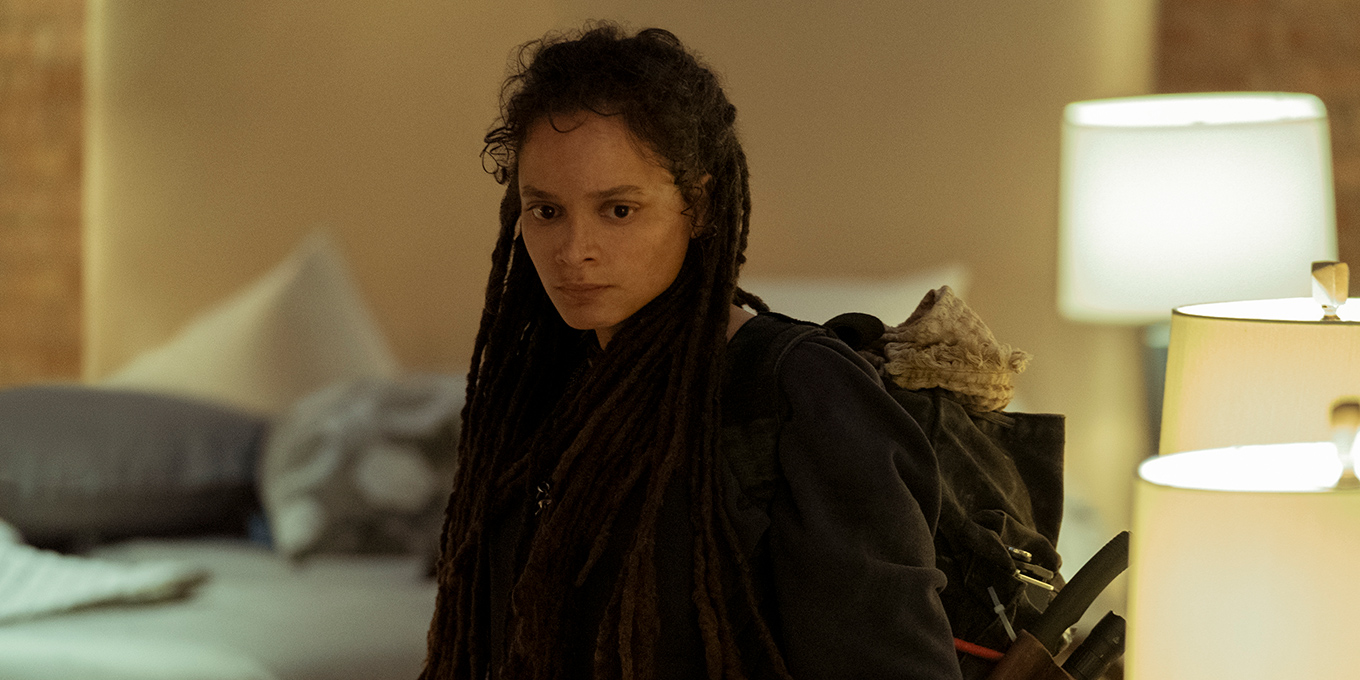 Sasha Lane had an unconventional start to her acting career. Four years ago, the then-college student was spotted by director Andrea Arnold while spending spring break at a Florida beach. Lane, an untrained actor, was cast in Arnold’s film American Honey opposite Shia LaBeouf – and the rest, as they say, was history. Lane’s latest project is Utopia, a pandemic-centric series helmed by Gillian Flynn, streaming now on Amazon Prime Video. (Filming, somewhat eerily, was completed before COVID-19 ravaged the world.) The conspiracy thriller, based on the original British version, tells the tale of a group of comic-book nerds who become infatuated with a rare, ostensibly fictional comic called Utopia. Lane stars alongside John Cusack and Rainn Wilson as Jessica Hyde, the tough-as-nails heroine who comes to life from the Utopia universe to save the world (and help the nerds, of course). We reached Lane in Atlanta over Zoom to discuss the character, how she prepared for fight scenes and where she wants to take her career next.

How did you get involved with Utopia?

I was sent the script, I think it was for the first episode, and immediately fell in love with Jessica Hyde. I love a good conspiracy. I love the entanglement and everyone’s purpose and why they were doing what they were doing. I loved the idea of bringing her to life. I’ve always been terrified to do TV, because that is a major contract – you could potentially be playing a character that you don’t really like anymore. But I felt confident that this was something that I would really love to continue if I got it. I just put everything I had into that audition. I met up with Gillian [Flynn] beforehand and the producer and we had a great talk. I refused to audition until everyone was in the room – it was like, I am not missing my chance to make you think that I am absolutely justified [to play Jessica] and there is no other option available.

How do you relate to Jessica Hyde?

I grew up in a non-emotional kind of household. It was just this ideology of don’t put your emotions out there and keep everything in and just make it through. Mentally, I was constantly in survival mode. I didn’t really connect with a lot of people and I always kind of felt like a loner. I was a bit cold, I’m not gonna lie. I was cold hearted, because I didn’t want to and I didn’t know how to express what I was feeling. But then obviously, I hit a point of [realizing] it’s good to love and to hold things that are soft. That was kind of fun for me, to be able to tap into something that I don’t necessarily feel anymore, and play that reserved human, but also bring you to a point where you’re still going to feel for Jessica Hyde. That’s my ultimate goal: you can think she’s a badass, you can think she’s a cold-blooded killer and she’s aggressive and all these things, but I want you to also walk away being like, I kind of understand and I get it.

What kind of prep did you do for the action scenes?

I’ve always been pretty athletic and with the past couple of films I’ve done, there were stunts involved. It’s like muscle memory; you can remember how to throw that punch, how to sell it and then you learn the camera angles and all of that. We didn’t even prep as much, because everyone was just kind of badass and somehow really good at doing these scenes. It was seriously the most fun I’ve had. I was stoked every time. The only thing that I would have to really get into with the director… He would be like, You have your gun in your pocket, your knife in your shoe and blah, blah, blah. And I was like, Here’s the thing: I am in a skirt. I would have my gun somewhere, but I’m gonna have to learn how to pull it out swiftly while also pulling up the knife and I’m not that coordinated, but let’s get it. That was always fun, reminding him I didn’t have pockets. [Laughs]

Do you have any rituals as an actor to get into character?

I usually form some type of playlist for each character and with Jessica Hyde I had “The Guns of Brixton” [by The Clash] and [Billy Idol’s album] “Devil’s Playground,” on there, which I got from John Cusack. He was playing some songs and I was like, this feels like Jessica Hyde. I also had a little [North London singer] ELIZA in there. When we were filming I kept those songs on repeat. I constantly would be in that zone a bit. You go laugh with your cast mates or you have Javon [Walton] who you’re like, I love you, kid. But now I have to go kill someone. So let me let me go back to that zone.

The show deals with a pandemic, which is very, for lack of a better word, relatable to what’s happening currently. How does it feel to have the show premiere now?

We filmed the show before the coronavirus pandemic, but Zika has existed, there has been the swine flu… I think film and TV is there to entertain you. But also, it’s supposed to make you think, it’s supposed to make you question. Having it released now, I don’t focus necessarily on how sensitive everyone is going to be, because at this point, it wasn’t predicted and life imitates art all the time. This is a show that’s existed as a U.K. version first, so the storyline has always been there.

How do you think playing Star in American Honey prepared you to play Jessica Hyde?

That whole movie was the craziest experience. It was not filmed like most things are filmed. With every role it kind of prepared me to take anything. Andrea [Arnold, American Honey director] does an amazing job at being able to accept the chaos and continue with it. So no matter what’s thrown my way, and what’s different, what’s crazy, what’s tiring, what’s long, what’s all of a sudden…I’m just prepared.

This is your first time working on a TV series. Is there any other genre or medium that you want to try eventually?

Everyone keeps telling me to do horror. I did Daniel Isn’t Real, but I kind of took that more in the psychology aspect and less of a thriller. I’m a truly paranoid person, so I don’t really want to go down that route, because I will scare myself. Maybe a period piece or something… I don’t really know, just whatever finds my way. I’m open. I just want to play like a freakin’ lamp or something like, please Disney.

Do you have any other projects coming up that we can look forward to?

I’m working on something for Marvel, but can’t really talk about it.

The Cast of Netflix’s ‘Ratched’ Discuss Their Buzzy New Show

‘The Boys’ New Superhero Isn’t What She Seems