Hilary Swank Has a Newfound Perspective on her Career

We talk to the actress about taking a break from acting and her new movie What They Had. 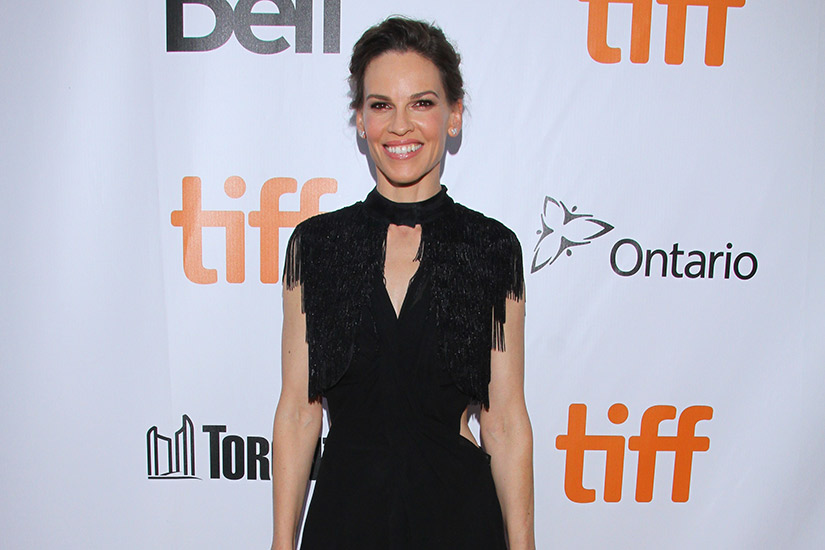 If you’re at all familiar with what the last few years of Hilary Swank’s life have been like—she took an extended hiatus from acting to serve as her father’s sole caregiver after a life-saving lung transplant—you may also notice that her newest movie is strikingly similar to her IRL situation. What They Had finds the two-time Oscar winner as Bridget, a woman who returns home to help her brother and father [Michael Shannon and Robert Forster, respectively] figure out how to care for her Alzheimer’s-suffering mother [Blythe Danner]. It’s not Swank’s exact situation, nor is it based on her family, but it makes sense that the emotional family drama is one of her first major film roles since her break.

Swank admits as much to us when we catch up with her ahead of the movie’s premiere at the Toronto International Film Festival. “Something like this was pretty much the perfect movie to step back into because of the subject matter and how close to home it was,” she says. “Strangely, I really felt more vulnerable in this role than I’ve ever felt. There was nothing I could really hide behind. It was really just a woman trying to find her way, like I am.”

This isn’t Swank’s first project since her break. While caring for her father—who’s doing well now—she started her own luxury-comfort clothing line Mission Statement before returning to the big screen in a supporting role in Steven Soderbergh’s heist comedy Logan Lucky. Also this year, she starred as Gail Getty in FX’s Trust, a 10-part miniseries about the kidnapping of John Paul Getty III. Now, there’s What They Had, also executive produced by Swank, which hits select theatres Friday. We sat down with the actress to talk about the film and putting a pause on her career.

Was the fact that What They Had hit close to home part of why you wanted to do it?

For a lot of reasons, I feel like this is one of those stories that really everyone can relate to, whether it’s just the love within family dysfunction, or a coming-of-age story for multi-generations. You’re always coming of age no matter how old you are—you’re still trying to figure things out, learning how to let go and step into the new. Bridget has not been living her most authentic self; she’s not really seen in her relationship. And it’s about taking care of other people but not yourself. There are many things that people are relating to, which is great, because those are all the things I related to when I read it.

The movie is very emotional and heavy, but it also has some really funny moments. Was that a difficult tone to strike?

That’s why Elizabeth [Chomko, writer/director] is such a talent. When you’re going through something like this in life, you have to find levity because if you don’t you’ll combust. You have to have a release. Sometimes it’s anger, sometimes it’s tears and other times it’s laughter; sometimes you’re so exhausted you get slap happy and you start laughing over ridiculous things. Elizabeth captured that really well.

This is also Elizabeth’s first feature-length film. What was it like working with her on that?

I am obviously a champion of women and I love supporting women and when Elizabeth sat down with me, I remember reading the script and thinking it was really special. She was so smart and so egoless, which are really important components of being a filmmaker. It’s her story but she didn’t hold onto it so tight that she didn’t make room for other people to be able to embody it and view it and give it their own colours. She’s for sure someone to watch. I think she’s going to have a really meaningful career.

Did taking that time to care for your father change how you look at your career at all?

Yes, it did. I’ve never not worked since I was 15 years old. I’ve been really blessed and I’ve always had something I’m doing, even if it’s one film a year. So stepping away from it, you realize how you define yourself. I always said, “I’m an actor.” Now, I realize that’s a part of who I am, but it’s not who I am. It was really important to recognize that, I think especially as a woman. We’re so multifaceted. But it also gave me a renewed appreciation for my craft and how much I actually do love it and how much it’s enriched my life. But there has to be balance—it’s not my everything. It was a really profound moment.

When you say it helped you realize how much you love acting, how do you mean?

I always knew I loved acting, but it gave me a renewed invigoration for it. I love learning about people, it’s inspiring to me. I realized that my art helps make up who I am. I walk in people’s shoes and I see through their eyes. It’s like reading a good book on steroids. I missed that.