Everything you need to know about the 2019 Golden Globes 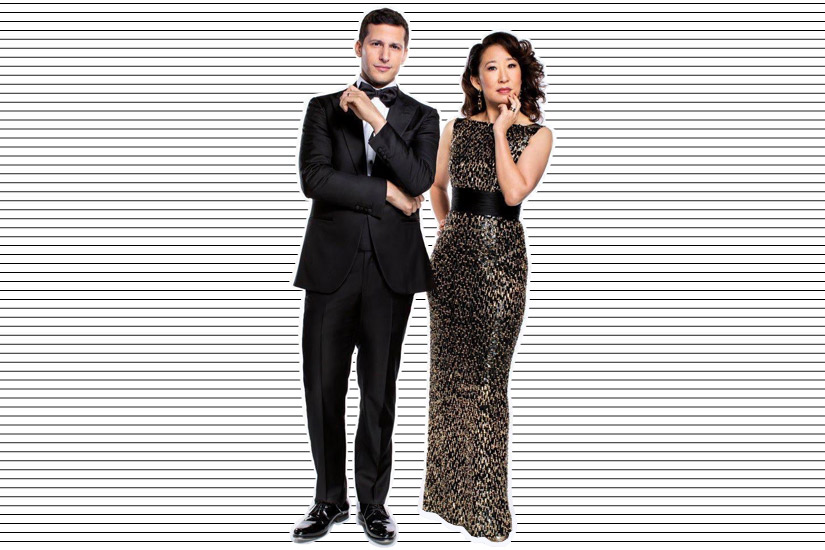 The holidays are officially over, which means we now have the time and energy to embrace the season dearest to our hearts: awards show season! The Golden Globes kick us off this Sunday, January 6 at 8 p.m. ET, celebrating some of 2018’s best in film and TV. Here are all the reasons you should watch the show’s 76th iteration.

Canadian Sandra Oh (who, btw, is nominated for her leading role in twisty spy thriller Killing Eve) is teaming up with Brooklyn Nine-Nine star Andy Samberg to host this year’s fête. If you remember the duo’s hilarious turn presenting at the 2018 Emmys, this is very exciting news. If you don’t, you’ll just have to trust us—they’re awesome together. While Samberg is somewhat of a veteran MC (he’s hosted the MTV Movie Awards, Spirit Awards and the Emmys), it’s Oh’s first time in the gig. “Honestly, I said yes even though it was terrifying to me, really terrifying,” the actress told The Hollywood Reporter. “I just could not let this opportunity pass me by, the life experience of being this scared of something.”

There’s only one word to describe these two: ICONIC. #GoldenGlobes pic.twitter.com/azYf0ve8zd

The Globes are notoriously less formal than your traditional award-show fare. Attendees are seated at round tables, served food and are drinking all evening. Half the fun is spotting which celebs are sitting together and guessing what random pairings are actually discussing on cuts to commercial breaks (tell us your secrets, Lady Gaga and Nicole Kidman).

Last year’s ceremony took on a more serious tone because of the #TimesUp and #MeToo movements, with many celebs paying tribute to these campaigns on the red carpet by wearing all black and some actresses even bringing activists as their dates to the show. It’s now been just a little over a year since the #TimesUp movement garnered wide mainstream attention. As of now, there’s been no talk of a mass demonstration, but we’re hoping we’ll still feel the presence of #TimesUp this weekend.

Awards shows aren’t just for celeb watching; there are, of course, actual trophies to be handed out. This year’s nominees are stacked with talent (Amy Adams! Crazy Rich Asians! Emily Blunt!) and we’re already trying to figure out how many statuettes A Star Is Born will go home with (for the record: we bet it’ll win four of its five categories). Plus, you’ll want to study up for your Oscars pool—while the results will inevitably vary, Globe wins could indicate who will capture more awards come February.

New for the 2019 ceremony is a lifetime achievement award recognizing the highest level of talent in television. TV icon Carol Burnett (who has won five Golden Globes and has been nominated for an impressive 16) is the first honouree, and thus, it has appropriately been named the Carol Burnett Award. There’s already a film equivalent to the TV honour, the Cecil B. DeMille Award, which goes to Jeff Bridges this year.