Everything You Need to Know About the 2018 Emmys

Who's hosting, who's nominated and more. 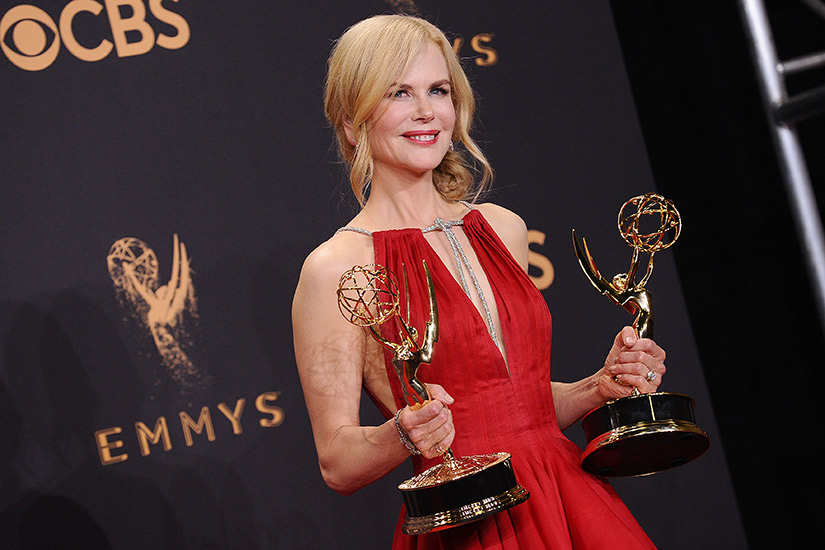 Our time has come, TV lovers. The 2018 Emmy Awards are just around the corner, and this year they’re turning 70. Here’s everything you need to know ahead of TV’s biggest night.

Pro: you won’t have to interrupt your Sunday night Netflix binge to watch the awards. Con: if you, like us, tend to be a bit sleepier at the beginning of the week, you might find yourself nodding off during the ceremony because the 70th Primetime Emmy Awards air on Monday, September 17 at 8 p.m. ET. That’s right, not on a Sunday, like other tentpole award shows.

In Canada, you can catch the show on CTV, with red carpet coverage going live on the network at 7:30 p.m.

SNL stars Colin Jost and Michael Che are taking over L.A.’s Microsoft Theater for the fête. It’s the first time the “Weekend Update” anchors are hosting the show—but at least we know they have experience on live TV. Fun fact: according to the Associated Press, it’s also the first time a current SNL cast member is acting as host since Eddie Murphy in 1983.

After not being eligible at last year’s ceremony (because of when the season aired), Game of Thrones is back at the top of the nominee pack, earning 22 nominations (including one for Outstanding Drama Series). Westworld and SNL follow closely behind with 21 nods each, while The Handmaid’s Tale scored 20.

One category we’ll be keeping a very close eye on: Outstanding Actress in a Drama Series, as two Canadians earned noms in the category. Tatiana Maslany was recognized for her multiple roles in the final season of twisty clone drama Orphan Black, while Sandra Oh received a nom for her work in thriller Killing Eve—making her the first Asian woman to be nominated in the category. The two are vying for the award along with Westworld‘s Evan Rachel Wood, The Handmaid’s Tale Elisabeth Moss, The Crown‘s Claire Foy and The Americans‘ Keri Russell.

Also noteworthy: for the first time ever, Netflix landed the most total nominations out of every network, drawing 112 nominations, to beat out usual frontrunner HBO (which earned 108 nods this year).

Who will be there?

Of course, you’ll be able to spot many of the nominees in the crowd on Emmy night. A number of A-listers have also been announced as presenters during the ceremony, meaning they’ll definitely be there. Expect to see stars like Constance Wu, Tina Fey, Millie Bobby Brown and Taraji P. Henson on stage set to hand over some winged statuettes on the night of.

Yes, actually. The Creative Arts Emmys Awards took place on September 8 and 9, recognizing technical and similar achievements. These are awards that don’t fit into the time crunch of the televised primetime ceremony we all watch. Winners from last weekend’s ceremonies include Queer Eye for Outstanding Structured Reality Program, Black Mirror: USS Callister for Television Movie and Tiffany Haddish for Outstanding Guest Actress in a Comedy Series (for her hilarious turn as SNL host). John Legend, who starred in and was a producer on Jesus Christ Superstar Live in Concert, also became the first African-American man to achieve an EGOT—meaning he’s won an Emmy, Grammy, Oscar and Tony awards—when the TV musical won Outstanding Variety Special (Live).