Everything that went down at the 2018 Oscars 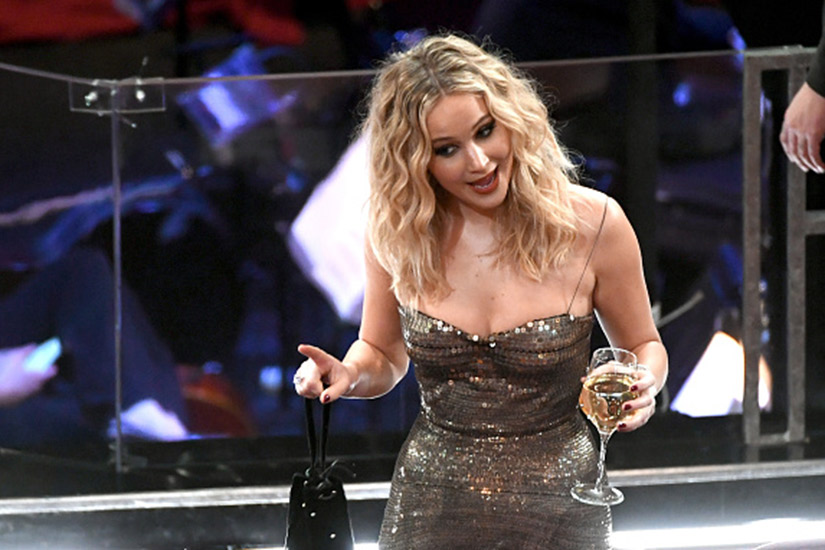 While the host didn’t mention the movements by name (a full tribute came later), Kimmel didn’t hold back from addressing the abuse and gender inequality that women in Hollywood (and around the world) face. He called out Harvey Weinstein (turns out Weinstein is only the second person ever to be expelled from the Academy), the pay-gap controversy between Michelle Williams and Mark Wahlberg during the All the Money in the World reshoots, and also spoke about sexual harassment.

As Taraji P. Henson mentioned when introducing her, Mary J. Blige is the first person to be nominated for an acting performance and original song in the same year. The powerhouse singer opened up the original song performances with a moving rendition of “Mighty River,” the song she co-wrote for her movie Mudbound.

3. Jennifer Lawrence had the most fun of everyone at the Oscars.

Whether she was hopping over seats in her Dior dress, strolling through the Dolby Theatre with a glass of wine, or gossiping with her BFF Emma Stone, the Oscar presenter was the star of the show.

3. Toronto gets an on-stage shoutout!

The Shape of Water won its first award of its whopping 13 nominations for its gorgeous production design. Canadians Paul Denham Austerberry, Shane Vieau and Jeffrey A. Melvin appeared on stage to accept the award and thanked their crew celebrating back home in Toronto. (The movie was filmed in the GTA area. It’s actually the fourth movie director Guillermo del Toro has filmed here.)

Awards-season favourites Sam Rockwell and Allison Janney brought home awards once again in their respective categories, having already won at the Golden Globes, SAGs and BAFTAs. Rockwell won for his role in Three Billboards Outside Ebbing, Missouri, while Janney nabbed the golden statue for her portrayal of Tonya Harding’s mother in I, Tonya.

Is it too early to nominate hosts for next year’s awards? Girls Trip breakout Tiffany Haddish and Maya Rudolph took the stage to present the awards for animated and live action short and earned the loudest laughs of the night. Funniest moment? Haddish’s shoutout to Meryl Streep. Clips weren’t up on YouTube when we went to bed, so Google it this morning.

All those in favour of Tiffany Haddish and Maya Rudolph co-hosting next year’s #Oscars say ??‍♀️??‍♀️??‍♀️??‍♀️ #AcademyAwards #TiffanyHaddish #MayaRudolph

6. Jimmy Kimmel invited “normal” people to the ceremony again…sort of

Riffing off last year’s bit inviting unsuspecting tourists into the Dolby Theatre during the ceremony, this time Kimmel shocked moviegoers at a theatre across the street who were expecting to see an advanced screening of A Wrinkle in Time. As a way to pay tribute to movie lovers, Kimmel led a star-studded group of celebs—including Gal Gadot, Emily Blunt, Margot Robbie, Lin-Manuel Miranda and Armie Hammer—into the theatre, surprising the audience with snacks and, weirdly enough, a hot dog gun.

7. There was a #MeToo moment

“This year, many spoke their truth, and the journey ahead is long, but slowly a new path has emerged,” said actress Annabella Sciorra on those who have bravely opened up about sexual harassment and abuse in the industry. Sciorra was joined on stage by fellow vocal #MeToo and #TimesUp advocates Ashley Judd and Salma Hayek. The three gave an emotional introduction to a video montage (featuring Ava DuVernay, Greta Gerwig, Mira Sorvino, Barry Jenkins and more) about the importance of diversity and representation in film.

8. Get Out and Jordan Peele didn’t go home empty handed!

The ELLE Canada team’s fave movie of the year didn’t win the top prize, but first-time nominee Jordan Peele took home the original screenplay Oscar. “This means so much to me. I stopped writing this movie about 20 times because I thought it was impossible,” Peele said during his acceptance speech. “But I kept coming back to it I knew if someone would let me make this movie that people would hear it and people would see it.” Peele’s win is also a historic one: he’s the first-ever black writer to win in the original screenplay category in Academy Awards history.

9. The best actor categories also went to the frontrunners

Like the supporting actor categories, the golden statues for lead performances went to the awards-season favourites. Gary Oldman won yet another award for his portrayal of Winston Churchill in Darkest Hour.  Frances McDormand took home her second Oscar, winning for Three Billboards. She definitely won best speech of the night, asking every other female nominee (actor or otherwise) to stand while the audience applauded, saying, “Look around, everybody, because we all have stories to tell.”

10. The Academy LOVED The Shape of Water

Guillermo del Toro’s romantic fantasy, The Shape of Water, won Best Picture—and, no, there was no mixup drama tonight (even though Warren Beatty and Faye Dunaway, who messed up the award last year, presented again). The writer-director-producer, who also won the prize for top director, dedicated his win to “every young filmmaker.” Of its 13 nominations, the movie ended up winning four awards.