Emily in Paris Season 2: Everything We Know 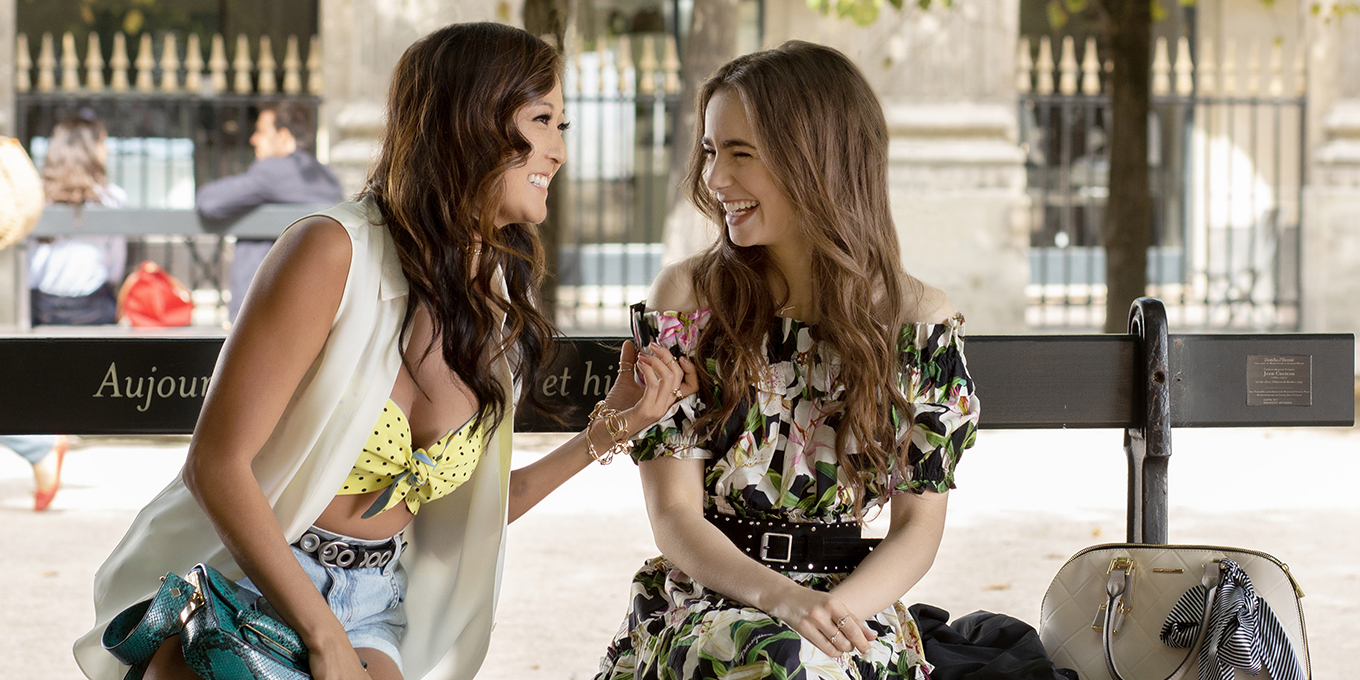 The Netflix show follows a clueless young American woman who walks into a culture with which she’s made no effort to familiarize herself; when she first meets her downstairs neighbor, Gabriel (Lucas Bravo), he tells her he’s from Normandy, and this woman straight-up says, “Oh, I know that beach; Saving Private Ryan, right?”

Ah, but despite Emily’s egregious fumbles, you simply must admit her journey is transfixing—particularly to any American who once studied abroad in Europe when they were young and stupid. Yes, Emily is supposed to be an adult woman from Chicago with a master’s degree and disdain for Lou Malnotti’s deep dish. But, when the show first premiered in 2020, Emily was living a glamorous life in Paris, taking photos of her croissants while the rest of us were getting themed face masks shilled to us by Instagram. How could we not want to be her?

Emily gets to run around Paris and take selfies; have awkward, inappropriate interactions with her boss; and bang many mediocre men without a care in the world. She doesn’t have to unscramble CDC guidelines and decide whether she should wear a mask or not wear a mask every time she makes dinner plans. Emily is free to be an ignorant American in Paris, and that is reason enough to watch this show.

Now, the real question is: When will there be more?

On Wednesday, November 11, Netflix confirmed Emily in Paris would return for a second season with a quirky note penned by Emily’s long-suffering boss Sylvie (Philippine Leroy-Beaulieu). 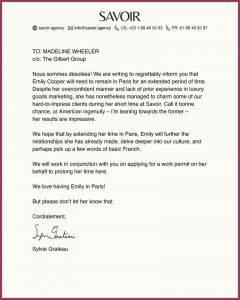 Before the renewal news, creator Darren Star told E! News he had some ideas for the next season. “I think Emily has some surprising tough choices,” he said. “The show’s so much about the culture undermining her expectations of how things are and how things seem. And everything will not be as it seems. It’s always about challenging her American worldview. We certainly have a lot of forks in the road and a lot of places to go.”

Production went smoothly, and filming wrapped as of August 4, 2021. To celebrate the occasion, Collins snapped a photo with her “partner in crime” Park.

Emily in Paris had only been filming for a single day before we learned season 2 has Em in a set of increasingly, erm, interesting outfits, several of which seem inspired by the ’60s. See a few selections here.

And in early July, paparazzi caught another shot of Collins filming in Paris, this time in a puff-sleeve peplum top, neon red mini skirt, lime green purse and navy blazer. Don’t ask how long it takes her to buckle up those heels.

The script could be refreshingly queer.

In an interview with Cosmopolitan, Bravo hinted at the possibility of a queer relationship in the second season. He said that the first season has “planted a few seeds about different characters.” This is where it gets interesting: “Like Camille, when she kisses Emily on the mouth, and she’s like, ‘I’m not sorry.’ And then when they’re in bed, and I’m liking the picture, it’s all little seeds,” he explained. “Anything could happen between the three of them. I think Darren wants this second season to be really open-minded.”

In an interview with Vogue U.K., Collins said, “There are tons of little moments where you’re like, ‘…Does Camille like Emily?’ You can’t really get a vibe, and I feel like that ambiguity is what keeps Emily intrigued. I think anyone in that position would be like, you’re my friend, but now I have this romantic connection [with Gabriel], and I don’t want to hurt you, but… Oh my God! So, you know what, it’s really confusing. I feel like the next season will only create more love triangle drama, although maybe Emily will have a little bit of a stronger handle on the situation.”

Emily did say in season 1 that, “I usually prefer men.” Is there a little room to mix things up, Em?

Lucien Laviscount has joined the cast.

Another love interest for Emily—and could he possibly be less of a Francophile than she? As reported by Deadline, Laviscount will join the recurring cast as Alfie, a Londoner who “refuses to speak French, or immerse himself in French culture.” Lovely! It would seem he starts his relationship with Emily as an antagonist, until that inevitably turns into something beguiling and sensual. He’s a finance bro who works for a British bank, and “unlike Emily, he works to live, not lives to work. He’d prefer to be playing football or having a pint with the lads in an English-speaking pub.”

Antoine will be a regular in season 2.

If you remember from season 1, Antoine Lambert is one of Emily’s clients as well as an investor in Gabriel’s restaurant. He owns a fragrance company and apparently has some strong opinions on the direction for Gabriel’s establishment—much to Gabriel’s chagrin. With Abadie bumped to a series regular in the coming season, expect drama. Lots of drama.

Continuing the thread of Emily in Paris leaning into the absolutely bonkers, Netflix announced in May 2021 that Jeremy O. Harris and Arnaud Binard will join the cast as guest stars. An iconic Broadway playwright, Harris will star as an obscure “iconic fashion designer,” while Binard will take on “the party boy owner of a popular Saint Tropez nightclub.”

Jeremy O. Harris will play an iconic fashion designer, Lucien Laviscount joins as a Brit who gets under Emily’s skin before she starts to like sarcastic charm, and Arnaud Binard guest stars as the party boy owner of a popular Saint Tropez nightclub. pic.twitter.com/lwiX1hZlsQ

Collins herself wouldn’t reveal any details about Emily’s love life.

In an interview with Deadline, Collins said she’s in the dark as to what’s next for her wacky character’s romantic life, but she reminded us that Camille is still in the picture.

“I don’t know what they’re writing right now,” Collins said, “but I think it would be a little early for Emily to lock something in. I think she’s still exploring the prospects. Honestly, I think Emily doesn’t even know [what will happen], and that’s the beauty of the way that they write the show. She has yet to find all the qualities she maybe is looking for. But that being said, there is that connection with Gabriel, but now she has Camille in that love triangle, so I think there’s still experiences to be had, adventure to be had and she’s still finding herself.”

Experience? Adventure? And it could be gay?

Expect much more from Sylvie.

Everyone’s favorite boss will be a main focus of season 2, Star told Vanity Fair back in October 2020. “I’d like to explore so much more of the supporting cast, like Philippine Leroy-Beaulieu, who plays Emily’s boss,” he explained. “I think we’ve just scratched the surface of who she is and what makes her tick…” Intriguing!

Think of it as the ultimate girls’ trip. “At some point, I was joking with Darren and said, ‘Couldn’t they just, like, hop on the Eurostar and, like, have a British excursion?’” Collins told HarpersBAZAAR.com. “I think it could be Emily going to all these different places. It’s Emily in…and then insert the city. She could just take the train and go all over Europe, and Mindy and her could go together.” 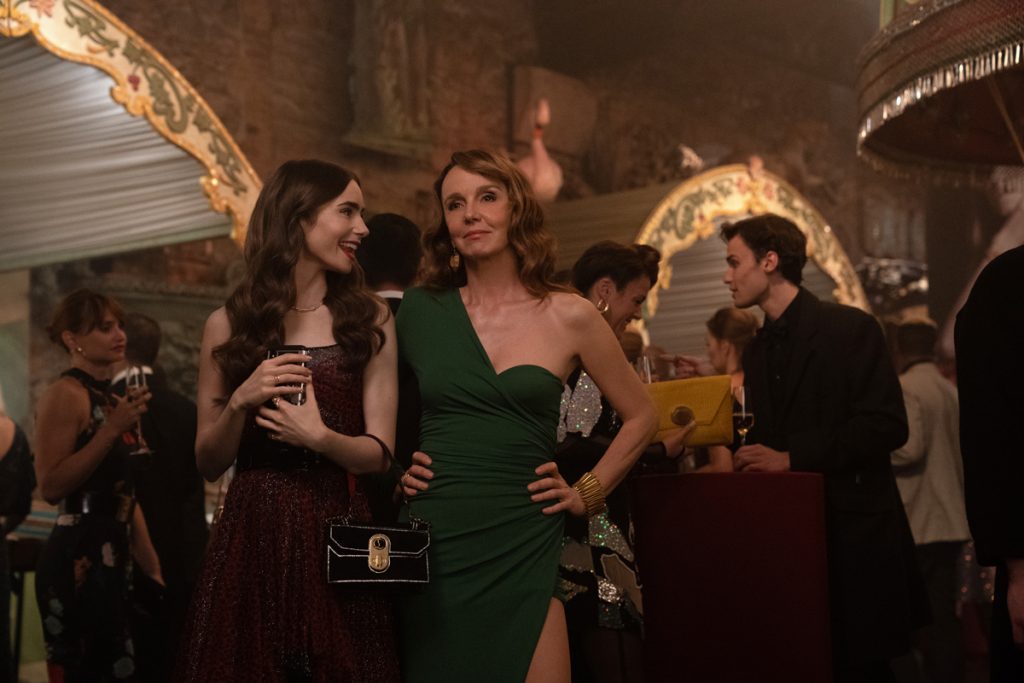 Season 2 could explore Emily’s past.

We definitely got our fill of Emily fumbling around Paris in season 1, and it seems season 2 will deliver less fumbling and more actual plot: “The first season, we only had ten episodes to really explore her new friends at work and who she meets outside of work, so I’m excited to dive deeper into those backstories and spend more time intermingling the two groups of people that she meets,” Collins told Deadline. “Now that we’ve seen her with all these ‘Parisisms,’ maybe we get to actually get to a bit more of her backstory, and experience that with some of the other characters.”

Emily will grow up a bit in season 2.

When Emily returns, Star says she’ll be more settled into life in Paris. “In season 2, she’s going to be more of a part of the fabric of the world she’s living in. She’ll be more of a resident of the city,” he told OprahMag.com. “She’ll have her feet on the ground a little more. She’s making a life there.”

Does this mean she will be less of an embarrassment to Americans? Time will tell.

In the meantime, au revoir, Emily! Read a history book!

Read more:
Emily in Paris Season 2: Netflix Confirms New Season – Here’s What We Know so Far
‘Emily In Paris’ Is a Fairy Tale Come to Life For Star Ashley Park
Bridgerton Season 2: Everything We Know 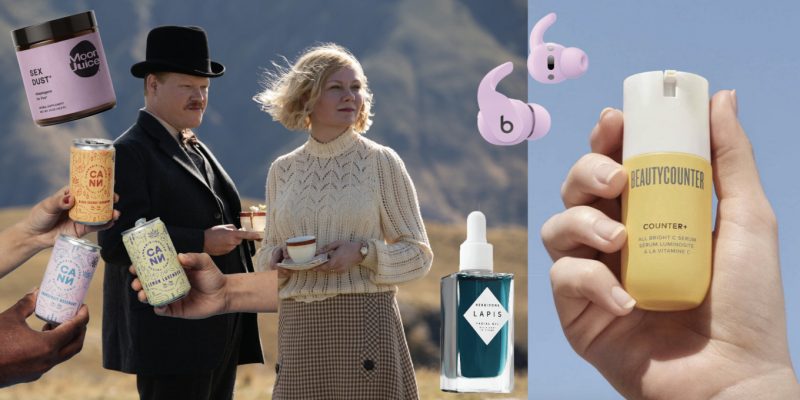 What the ELLE Canada Team Is Loving in February

What the ELLE Canada Team Is Loving in February