Elle Fanning on Mary Shelley and Working with Women Directors 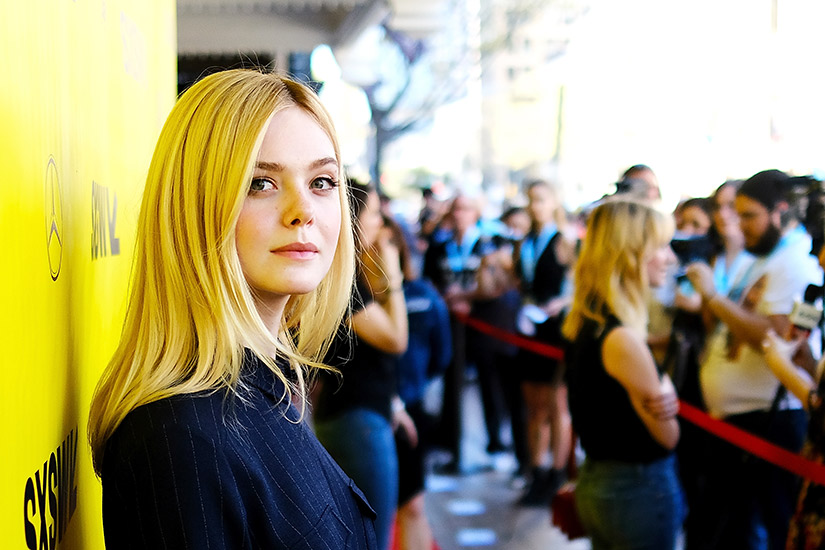 There may be centuries (literally) separating Mary Shelley star Elle Fanning from her titular role in the period drama, but that didn’t stop the 20-year-old actress from connecting with the renowned novelist (who started writing Frankenstein at 18, a few years after losing her baby). “Obviously in that time, people were much younger when things happened to them—she already had kids and babies,” says Fanning, whose first acting role came when she wasn’t even three years old, playing a younger version of her IRL big sis Dakota in I Am Sam. “But I did relate to growing up faster. I was around adults a lot from starting movies when I was young, so in that way I felt a little bit more mature.”

Mary Shelley, in theatres now, tells the story of the Frankenstein writer, focusing on her romance with Percy Bysshe Shelley (Douglas Booth), who is said to be an inspiration for the classic. We sat down with Fanning when the film premiered at TIFF to chat about the movie, working with women directors and filming in corsets.

Director Haifaa al-Mansour has called Mary Shelley a coming-of-age story more than anything else. Do you agree?

I do. And yes, it’s a historical movie where we’re wearing the corsets and it’s in the 18th century, but I think our [movie] has a different feel to it. There’s a modern-ness to the film. I read Frankenstein in school and you study the book, and then the teacher kind of brushes over Mary Shelley’s story. There’s so much more to her that people don’t know.

Mary seems so self-assured at just 16 years old, like she really knew herself and her convictions. Can you relate to that?

I think she was still trying to figure it out. I felt that—I feel that way. When you’re growing up, you’re trying to figure out what you believe in, what your opinions are. I understood that confusion.

Mary’s relationship with her husband Percy, including his infidelity, is also a pretty big part of the movie.

I think that’s what made her write Frankenstein. There’s a part in the movie about how Victor Frankenstein is Percy and he’s created this monster, which is her. She feels like a monster of emotions, of being torn apart and pierced together, all these different beliefs and things. She forgave him in writing.

Obviously, you worked with a woman director for the movie. Is that a priority for you?

It’s so important. I didn’t even realize it—because it’s not a thing I think about, it’s just if I love the story and the director happens to be whoever—but, without realizing, I’ve worked with four women directors in a row: Haifaa, Sofia [Coppola, The Beguiled], Reed Morano [on the upcoming I Think We’re Alone Now] and Mélanie Laurent [Galveston]. But I think the way women tell stories about women, it’s real. They get it. And it needs to be shown, especially for young girls to relate to all different types of women.

Yes, women contain multitudes, we’re not all defined by one thing.

Women characters don’t always have to be strong. There’s all different types, we all have different types of emotions. Mary, yeah, she’s strong, but she’s sensitive, and she feels things, and is complicated and confused. It’s important to have women characters that are true to how women are. Women directors get that.

Haifaa was very connected to the story, right off the bat. When I met her, she was just so in love with Mary and what she’d been through. I remember the first day she came on the Mary Shelley film set, she started crying because she’d never been on an [open] film set [ed’s note: in Saudi Arabia, where al-Mansour is from she often had to film in secret, from inside a van, for example], so it was very emotional. I felt that she was so in love with Mary and just wanted to protect Mary so much. Working with her was very nice because she was supportive in that way. I’m very happy it was her. A woman had to tell this story.

Let’s talk about the fashion. Is it fun playing dress up, or does it get exhausting?

Bel [Powley, who plays Mary’s stepsister Claire] and I had revolt towards the end. We were like, “We are not wearing corsets! We can’t anymore!” But we did wear the corsets everyday.

Oh yeah, the real deal. It didn’t seem period-accurate if you didn’t have your corset on because you move so differently.

This is a story about an inspiring woman. Who inspires you?

I have a lot. My mom, my grandmother, my sister, my aunt. All the women in my family are huge inspirations for me. My grandmother’s the best. She was a rodeo queen!