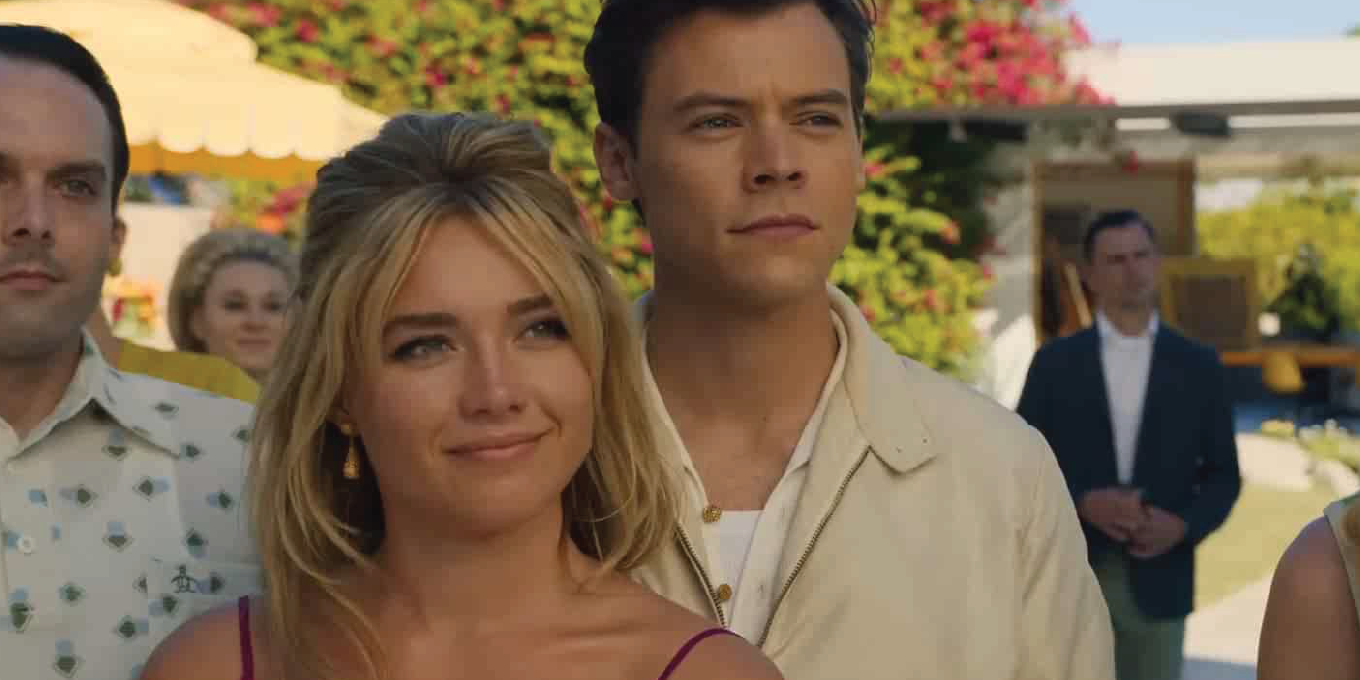 The film that brought Olivia Wilde and Harry Styles together is finally inching toward a release. And if the trailer that dropped at the 2022 CinemaCon in Las Vegas is any indication, it’s going to cause quite a stir when it arrives.

Wilde’s first full-length directorial feature since 2019’s Booksmart, Don’t Worry Darling follows a 1950s-era American couple living in a utopian community, and the fallout that occurs when the wife (Florence Pugh) realizes her husband (Styles) might be working for a disturbingly dystopian company. (It’s always the corporations!!) It would also seem the film is an excuse to provoke Styles and Pugh stans into near delirium as they frantically screenshot images from the trailer—in particular, scenes involving some, as one George Bailey would put it, “passionate necking.” Thankfully, fans needn’t wait much longer for more: Don’t Worry Darling is headed to theatres on September 23, 2022.

In the meantime, there’s enough going on behind the scenes of the film to keep us occupied. Director Olivia Wilde, who recently ended her relationship with actor Jason Sudeikis, met Styles on set, and the two soon launched an entrancing, albeit camera-shy, romance. As we wait for more news, here’s what we know about the film—and what’s happening behind the scenes.

When will Don’t Worry Darling come out?

Mark your calendars for September 23, 2022, when the film will first hit theaters. Wilde posted the trailer with the caption, “In theaters only,” which means there won’t be an adjacent debut on a streaming platform. That doesn’t mean Don’t Worry Darling won’t ever drop on a streamer, but if you’re eager to be first in line to watch Styles in action, you’re going to want to buy a ticket.

On July 26, 2022, Deadline also confirmed that the film will make its world premiere at Venice Film Festival (running August 31 through September 10), and that Pugh, Wilde, Styles, Gemma Chan, and Chris Pine will be in attendance. Could it finally be time for a red-carpet couples debut?

Who’s in the cast?

Little Women and Black Widow star Pugh plays Alice with Styles as her husband, Jack. Other confirmed cast members include Chris Pine, Gemma Chan, KiKi Layne, Sydney Chandler, Nick Kroll, and Wilde herself, each, seemingly, as members of the utopian community known as the “Victory Project.”

Is there a trailer?

Wilde first released the full-length trailer at CinemaCon on April 26, 2022, an event overshadowed by the manila envelope she was handed onstage. The mystery delivery was later revealed to be legal papers from her ex, Sudeikis, though Sudeikis apparently had “no prior knowledge” that Wilde would receive the papers during the presentation. The incident sparked a flurry of tabloid and trade coverage in the following days, unfortunately eclipsing what is an all-around intriguing and well-acted trailer for Don’t Worry Darling. Watch the full video below.

Another official trailer followed on July 21.

So, what’s the story with Wilde and Styles?

News first broke in September 2020 that Styles would be replacing Shia LaBeouf in Don’t Worry Darling, following the latter’s “poor behaviour” on set, per Variety, as well as a sexual assault lawsuit from singer FKA Twigs. Wilde later told Vogue she did a victory dance after learning Styles would join the cast. “This movie is incredibly stylistic,” she told the magazine. “It’s very heightened and opulent, and I’m really grateful that he is so enthusiastic about that element of the process—some actors just don’t care.”

The director and actor did not, however, step out together in public until months later, in January 2021. They were first spotted holding hands at the wedding of Jeffrey Azoff, Styles’s manager, and People confirmed the couple had “dated for a few weeks.”

“They were very careful about it and even sleuthy at times, although the small group of people who were on set with them every day eventually figured it out,” a source later told Us Weekly. In the months since, the couple has been seen in public a handful on times, particularly in London, Italy, and Las Vegas. But they’ve yet to appear together at a public-facing event, meaning Don’t Worry Darling’s Venice celebration could serve as their premiere as well.

What about the costumes?

Arianne Phillips (Once Upon a Time in… Hollywood, Walk the Line) designed the costumes. As Wilde recently told ELLE.com, “She is someone who has a very deep and incredible knowledge of fashion and vintage. She got her start touring with Madonna. She’s designed Broadway shows and films. And when we began working together, she taught me so much about vintage fashion. We explored so many different decades of fashion when designing this film. And we always came back to the classic staple pieces, and what style has survived… That’s what a classic is—it’s what survives, and the idea of ‘what survives’ is really interesting [in the film]. So our lead character, played by Florence Pugh, wears a white button-down men’s shirt.”

Wilde added: “I remember when Arianne and I were designing the film, we thought, We have to incorporate a white button-down into the film, because it is something so timeless that now, in 2022, we recognize it to be sexy and classic. And in 1958, when a woman putting on her husband’s shirt was equally gorgeous and flirtatious, and somehow masculine and playful. It’s a woman taking power from a man’s work clothes. That’s important!”

Read more:
Everything We Know About Harry Styles’ New Film My Policeman
Harry Styles Is Coming Back to the Big Screen