In 2019, Domee Shi made international headlines when she won an Academy Award for her Pixar-animated short, Bao. Not only was it the young Chinese- Canadian animator’s directorial debut but she also wrote the touching and personal story, which is about a Chinese mother who’s dealing with her child growing up when suddenly one of her dumplings comes to life, giving her something new to care for. Set in Shi’s hometown of Toronto, the film put the city and its Chinese community in the spotlight, and it also put Shi on the map as an important voice leading the next generation of animators.

It’s no surprise, then, that since Bao, Shi has been hard at work on her most recent project, Turning Red, which Disney and Pixar released on Disney+ on March 11. The film—this time a full-length animated feature directed and written by Shi (and co-written by Julia Cho)—is about 13-year-old Mei Lee (Rosalie Chiang), who, while trying to be the perfect daughter for her mother, Ming (Sandra Oh), and dealing with the physical and emotional turmoil of adolescence, finds herself—to her horror—turning into a giant red furry panda whenever she gets excited. “That’s kind of how my brain works,” Shi told us recently over Zoom from her home in Oakland, Calif. “I like to combine personal, meaty subjects with cute things and try to turn it into a story. That’s kind of how Bao came about, and that’s how Turning Red came about as well. It’s why I got into filmmaking—I wanted to share these stories and
make people laugh.”

We spoke with Shi ahead of the film’s release about the inspiration for this story, her love of red pandas—and the city of Toronto—and the diverse future of animation.

For those who don’t know about the painstaking process of animation, how long did it take to complete Turning Red from the time it was green-lit?

“It took almost exactly four years, and that’s on the fast side, which is crazy. Right as I was promoting Bao [in 2018], I was already pitching Turning Red.”

The animation in this film is incredible. I want to describe it as “juicy.”

“Yes! It’s very juicy and very tactile. We were really inspired by soft, chunky, cute [animation]. We wanted to make the red panda feel furry—as furry and real as possible. And since our main character is a 13-year-old girl, we really just wanted to show the world through her eyes.”

Where did the idea for this story come from?

“After finishing Bao, I realized I still had a lot to unpack with my relationship with my mom—a feature-length film’s worth of stuff. [Laughs] And I really wanted to tell a coming-of-age story about an adolescent girl—through her body, her friendships and her relationship with her mother—as she goes through big changes in her life. I also wanted to combine that with what I believe is the cutest animal in the world—the red panda. I thought, ‘Wouldn’t it be awesome if it was eight feet tall and talked?’”

What’s the symbolism of the red panda for you?

“I just think it’s the perfect metaphor for adolescence: It’s big, it’s furry, it’s red, it’s awkward. Something about the colour red is very symbolic of puberty—at least for girls.” 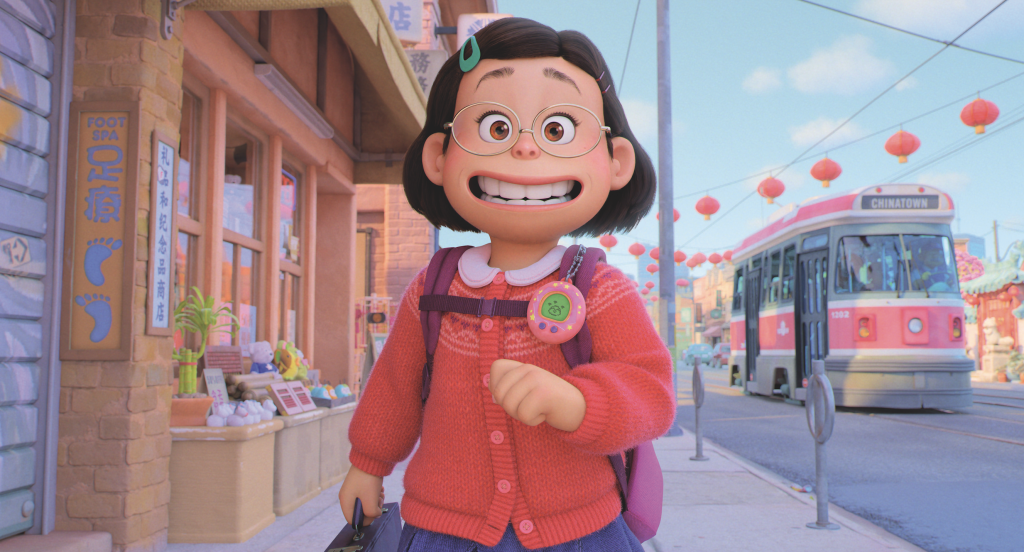 You keep giving love to Canada. What made you want to set another story in Toronto?

“I want to give props to Toronto. I love Toronto—I grew up there. I feel like it doesn’t get that much love in the media: In movies and on TV, it’s always disguised as an American city, yet it’s so diverse, unique and cool [in its own right]. It felt like the perfect backdrop for this story. I have a lot of fond memories of the city.”

What was it like having Sandra Oh voice the role of the mother?

“We really needed an actress who has an incredible range [because] Ming is strong, icy and scary but also really funny and kooky. She has to be tender, motherly and believable, yet you have to empathize with her even though she’s a little bit wacky and overprotective. We needed an actress who could embody all of that, and thank God Sandra came into our lives because she has that range—she can go from scary to empathetic in a split second!”

“I’ve always been fascinated by how drawings can come to life and make you laugh or cry, and I’ve wanted to [create them] ever since I was little. I’ve always wanted to get reactions from people through my drawings and through the stories in my sketchbook. That love, that want, never went away. I was a quiet kid, and in middle school I even developed a stutter, so drawing was my way to communicate with people. It was like my superpower.”

When you were writing Turning Red, did you draw on real-life experiences?

“I definitely had a secret sketchbook [like Mei has] underneath my bed [when I was young], and I prayed that my parents would never find it. I think I threw it away a long time ago—at least I hope I did. And the instance where Mei sees her mom spying on her at school—that happened to me on my first day of middle school. It was mortifying but also hilarious, juicy and good for the semi-autobiographical movie that I’d make 20 years later.”

Are you seeing more diverse storytellers in the animation industry  today?

“Yes, there’s been a big shift over the past 10 years, and you see it from the ground floor. If you go to any animation school and look at their enrollment, it’s more than 50 percent women. That was not the case a couple of decades ago. I think a lot of it has to do with access—the internet has exploded with this interest in animation, making the world a lot smaller. It’s become a more level playing field when it comes to accessing all these resources that before only a select group could access. It’s cool because now we’re seeing all these new types of storytellers and stories being celebrated—and that’s pretty awesome.”

Read more:
Rising Star Josie Ho Is a Singular Talent
Chances Are You’ve Seen Patti Harrison Before and She’s Made You Laugh—Hard
Never Have I Ever’s Maitreyi Ramakrishnan Is on the Rise