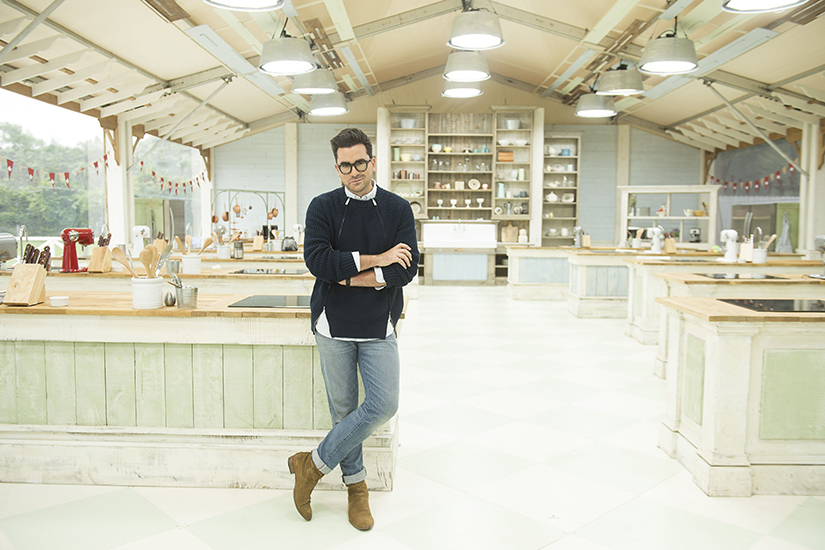 When you hear that Canada is getting its own spin-off of The Great British Bake Off, you’ll have one of two reactions: The first will be a feeling of gentle warmth rising up from the cockle of your heart already occupied by the original cult show, and second a great resounding…”Huh? Aren’t cooking competitions so Top Chef circa 2009?”

If you fall into the first camp, please skip right past this paragraph and straight onto our utterly delightful, entirely uplifting chat with Dan Levy, co-host of the The Great Canadian Baking Show. (But before you go, a detail – it premieres November 1!)

Camp two, listen up: The Great British Bake Off is not, in fact, a competition show: Yes, it’s about a group of amateur bakers who compete in a tent in the English countryside each week for the title of Star Baker, but it’s so much more. It’s about the kindness to be found in sharing your raisins when a fellow competitor who has to redo their fruit cake, the pathos in the soggy bottom of a pie that turns out perfectly every time but the one it counts, and the urgent reminder that humanity can be good in every bit of cooperation between people who should be rivals. And yes, you will cry every episode.

Now that’s all settled, now onto an interview with Dan Levy, Schitt’s Creek star and now co-host of The Great Canadian Baking Show, our very own home-grown version of the beloved British show.

The judges, hosts and cast of season one of The Great Canadian Baking Show.

So, were you a fan of the original before you got the gig to co-host with actor Julia Chan?

I am a rabid fan of the British show. I was so overwhelmed with how simple and lovely the idea was that I tweeted that if the franchise ever came to Canada, I would love to throw my hat in the ring [to host]. I went to sleep, thinking nothing really of it, and then woke up the next morning to this barrage of direct messages and tweets back at me saying, ‘It is coming to Canada, and it’s coming to CBC’. Within the week, I had gotten the call asking if I wanted to be a part of it for real, and next thing you know, I was signing on. So I feel it was kismet in a way. The power of the internet!

And the power of the show…

You know, I left hosting television a decade ago with no intention of ever returning. I never really liked it. But it’s such a joyful experience to watch [Bake Off], and the great part about the host role in the show is that you’re not really doing much other than supporting and encouraging the bakers, and that was something that I could really get behind. That and the general sentiment of support, encouragement, and positivity that I think the show represents.

For once the host’s job isn’t to create tension or drama.

No! I just want to align myself with something positive right now because we need it. The show in its own little way sends a message about a world where people get along. The great thing about the competition element of this show is that it’s not really between the bakers, but between the baker and their oven.

That means there’s nothing to be gained in sabbotaging your opponent, for example.

Exactly, because at the end of the day, it’s either going turn out well or it’s not. And that has nothing to do with the baker beside you.

The original Bake Off is very quintessentially British, and that’s a huge part of its charm, especially for an international audience. Did you guys think a lot about adding a Canadian “flavour” to this show?

Inherently, that comes down to casting, really, and the cast of bakers we have in our first season is the best cast I’ve ever seen. Each and every one of them have such a strong viewpoint, and they’re all so likeable and represent different facets of our country. And Canada, much like England, is rooted in good manners. We are respectful and kind, and that’s what shines through in the show, and in a way, that’s what ties us with the British show, probably in closer ways than other countries who have tried to bring the franchise to life. We’re a very polite bunch, which makes for some funny TV when that well-intentioned attitude is put to the test.

Did you pick up any hot baking tips while making the show?

I learned that I don’t want to bake anything! I would never do well in that competition, but as an observer, I learned what it takes to bake, and my respect for home bakers is now thought the roof. To make something from scratch is a lot different than what I thought baking was, which was to open a box of cake mix and throw some eggs in and put it in the oven. This is the real deal, and I was impressed every single day in that tent.