Erivo offers a deeply profound portrait of what it means to be a woman today in Roar. 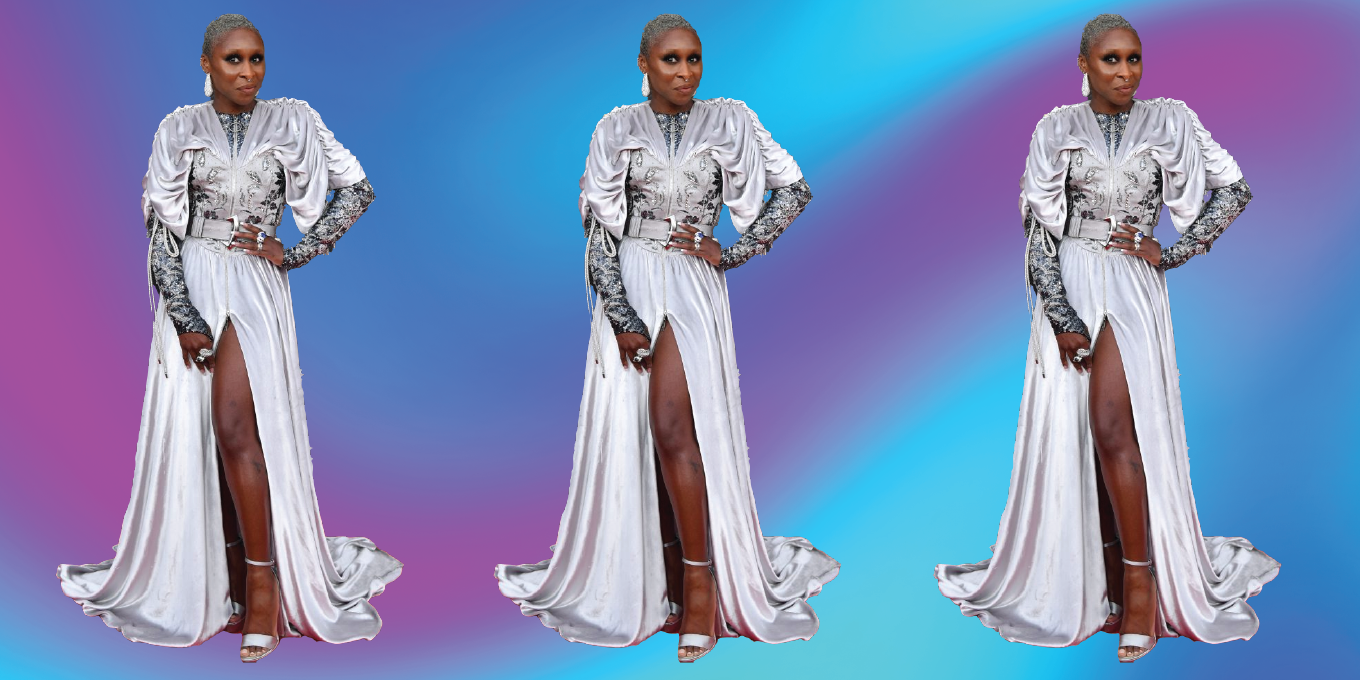 Cynthia Erivo is no stranger to the world of film, TV or Broadway. The Emmy, Tony and Grammy award-winning actress is a powerhouse in her own right, fully embodying the characters she plays.

Erivo’s most recent role is in the AppleTV+ anthology series, Roar, that offers an insightful, poignant and deeply profound portrait of what it means to be a woman today.

Based on a book of short stories by Cecelia Ahern, Roar is created by co-showrunners Carly Mensch and Liz Flahive. Erivo stars in the episode titled “The Woman Who Found Bite Marks On Her Skin.” Erivo plays a high-powered career woman who’s also a new mother and starts to find bite marks all over her body. The metaphorical guilt of leaving her kids behinds leaves physical scars all over her.

When it came to the appeal of a show, Erivo said in a video interview with ELLE Canada that she had never seen a character like this before. “I know of women who have her experience and I think the wonderful thing about this was that it was handled with such care. The idea that you could turn an experience into something that was a physical manifestation of what people have gone through was really intriguing to me. I thought that it was a wild and ambitious thing to be able to turn an experience into something physical.”

She admired that the showrunners wanted to tell this story with a woman at the centre, and have no qualms about it. “I loved that it was written and created by women and I loved that I would be on set with women calling the shots, I love that I got to have a female director with me as well.”

It’s rare to see a working mother balance out her high-powered career on-screen in a messy, unfiltered way, but at the same time to see a high-powered Black woman in that position is rarely ever seen explode on screen. Erivo said that it’s exactly why she wanted to be a part of the series.

“Often [these topics] sort of go under the radar, and they’re not really seen at all on screen and they do exist. We do exist.”

The Guilt of Balancing Career, Family and Social Life

Erivo knows how tough it is to have to navigate a high profile career, family and a home life—making sure you’re there for people when you can be. “There are so many things and moments in people’s lives that I’ve had to miss out on because I am away and I’m working. I want to make sure I’m there for what I need to do. There are times when I’ve had to miss out on things because of wanting to be there for family and friends and the guilt is there,” she said.

“The idea that it does eat at you and there’s nothing you can really do about it except for express and talk about the fact that, ‘Hey, this is eating me and I don’t know how to handle it.’ Doing this helps me understand what mothers have to go through and as someone who wants to be a mother soon, hopefully, the balance is tough to find. It’s really about being okay with asking for help.”

Roar is a powerful series that’s ultimately about the obstacles women face when trying to find their place in the world. While 35-year-old Erivo is a successful actor and artist who made a name for herself in the industry, she also had to face her own fair share of obstacles to pave the path for herself and for those who follow in her footsteps. Namely, it’s changing the perception of Black actors and Black women. The risk? Being called difficult for speaking up.

“It’s often trying to change the idea of what Black women can be when you’re on screen. I definitely have had to sort of challenge people’s ideas about what we can be and where you can see us and the different positions we can take up and different spaces we can be in,” she explained. “I think that sometimes you’re met with stereotypes and ideas of what we are. I’ve often found myself having to sort of undo those ideas. When it comes to scripts, I force people to think outside of the box. So that script that might go to a white man, and I look at it and go, ‘This could easily be a black woman.’ It doesn’t necessarily have to be a white man, it doesn’t have to be a white woman. Black women experience this too. Those are the things I sort of come up against. I’m very specific about the things I need, and I don’t mince my words. So when I’m honest, I ask questions, and I want to find out what’s going on so sometimes you can be called difficult for just asking a question, or knowing something that’s necessary. I have come up against that a lot. So that is something that I have to navigate. That’s for sure.” 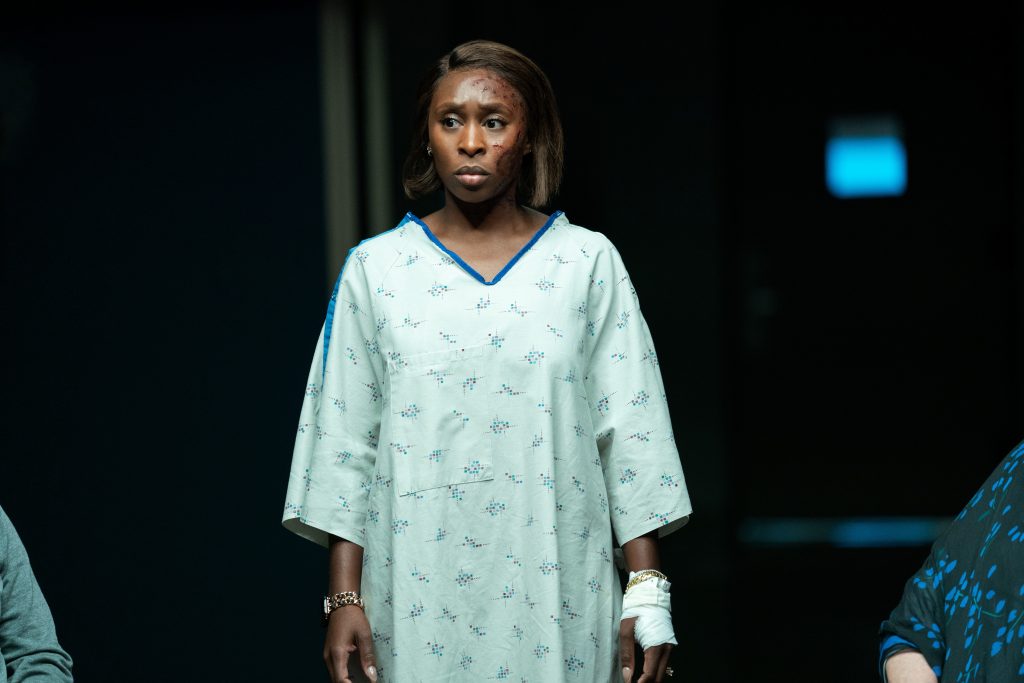 Each of Roar’s short stories marks an epiphany or moment of transformation in the lives of the women. For Erivo, she feels like she’s consistently having different epiphanies and that journey never really stops. The English actress won the Tony Award for Best Actress in a Musical for Broadway hit musical The Color Purple, and fighting to get that role was one moment when she felt the need to roar.

“The first time I did the [The Color Purple] show, I was in London in a small little theater. I was so sure that this piece was the right piece for me that I was fighting for it. And when I went into the room to finally audition for it, I refused to go out of that room without getting that role, because I just I just knew it was supposed to be for me. And then you know, when you finally on a Broadway stage in the song, I get to sing the song and landing at that moment, the last lyrics of the song is ‘I’m beautiful. And I’m here,’ you have to navigate through a lot of stuff to get to that point. Every time I would get there, it wouldn’t just be the character saying it would be me saying it as well, because I sort of had reached an understanding of who I was and what I wanted.”

No Is a Full Sentence

Erivo has a group of women who consistently inspire her, including her aunt and her mom. When asked what is the most inspiration advice she’s received from the female figures in her life, she shared two.

“One is that ‘No’ is a full sentence and I shouldn’t be afraid to use that word.”

“Two, I have to a friend of mine, she will always say to me: ‘I hope you’re taking a moment to take in what’s happening around you. Taking the moment to be present in what is happening around you.’ I’ve never forgotten that because it’s really easy to let these wonderful moments pass you by as they happen. It’s easy to forget to stop and take stock of the moments. Because I have that ringing in my head, I often stop, take stock and understand how wild this moment is, how crazy it is to be in these positions and experiences that I only ever dreamed of. So now I can sort of live in the moment as it’s happening.”

Erivo is clearly a force to be reckoned with and she gives it her all with her role in Roar. The series also stars Issa Rae, Alison Brie, Betty Gilpin and Nicole Kidman, who also produces the series.

Roar debuts globally with all eight-episodes on Friday, April 15 exclusively on Apple TV+.

Read more:
Anna Chlumsky Is Asking All the Questions
Domee Shi Isn’t Done With the Growing Pains of Life
Bridgerton’s Kathryn Drysdale Is Having Her Moment