Colony Star Sarah Wayne Callies on Being a Sci-Fi Hero 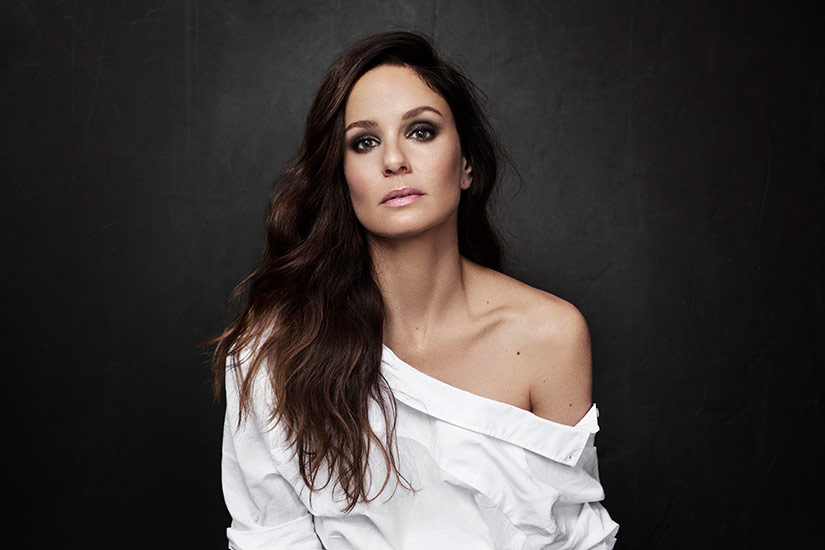 Sarah Wayne Callies warns us that things might get a little rowdy when we connect on the phone. With a break in her schedule from filming her latest project—a miniseries about the Canadian tainted blood scandal in the ‘80s—she and her B.C.-based family, including her husband, two kids (10-year-old Keala and four-year-old Oakes) and their two dogs, are packed into the car on their way for a hike. “Multi-tasking motherhood is really the only way that anything gets done around here,” the 40-year-old American actor laughs.

And with almost 200 episodes of television under her belt, it makes sense that multi-tasking is a priority. Best known for her roles in Prison Break and The Walking Dead, Caillies is currently starring opposite Josh Holloway (Lost) as badass revolutionary Katie Bowman on sci-fi drama Colony, about a family fighting to stay together amidst an alien invasion. We spoke to Callies about the show’s upcoming third season, being a sci-fi fan and directing for the first time.

Can you tease the third season of Colony for us a bit?

It continues to be a show with incredible resonance to our contemporary situation, both socially and geopolitically. It makes me think that our writers are time travellers. In season three, the second half of the season is all about aggregate data and the ways in which our electronic lives are being mined in ways that categorize and manipulate us against our will. It’s a gift of science fiction to be able to explore contemporary issues with aliens and spaceships, and yet even in that context, it seems kind of eerily ripped from the headlines.

What’s it like to have worked with a story that becomes so relevant after the fact?

On the one hand, it makes me nervous. Every time I read a script, I go, “God, what’s going to happen to my culture and community in nine months?” Creatively, it’s why I always wanted to do science fiction. We’re in a really great era because I think the narrative used to be that science fiction is for dudes. Over the course of my lifetime, we can really see science fiction wake up. There all these amazing heroines in science fiction right now and it’s really an honour to be a part of that.

Is that what drew you to the show and your character?

Yeah. I’ve had some amazing roles, of course, but so often female leads are articulated as the romantic interest of the male lead. Katie occupies her own moral universe. She doesn’t exist just to tell the audience more about the male lead. She is her own fully-realized character, and that’s a very small revolution in and of itself over the course of my career in TV.

Do you relate to Katie more the longer you spend time with her?

I love her more and more. I think we’re both fed up with the world and what it sometimes mean to be a woman in it. There’s a part of both of us that, after a lifetime of playing by the rules, we’re starting to feel that we’re mad as hell and we’re not going to take it anymore. It’s exciting to be a woman in this moment in Hollywood and to be playing a woman revolutionary.

You also got to direct an episode this season—your first time stepping behind the camera. How did that come about?

I decided I wanted to direct an episode because I’ve been in almost 200 episodes of television and there’s almost never enough female directors. I just figured I should haul off and become one, partly out of self-defence and partly because it’s time. So I went to Josh [Holloway] first and he said, “I think it’s a brilliant idea, I love this. I’ll support you. I have your back.” Josh was really a champion in the room for me. [On set] his support made it clear to the entire crew that this wasn’t just some vanity project, but that this was something we were all going to take really seriously.

What was the most challenging part of directing?

That must be so weird. Are you someone who’s tough on yourself?

Oh, I was merciless. I never gave myself more than three takes. Of course, I hate my work as actor. It was definitely my least favourite part of the whole thing.

When you’re not busy on set, what do you do for fun?

I’m sort of obsessed with growing my own food and cooking. We sat down at dinner last night and realized that everything on our plates had come from the province and from people that we know. The lifestyle of award shows and red carpets and working on set is very different from the one where I just get my hands dirty, plant a garden, make kombucha and cook for my family. That’s a greater sense of accomplishment and joy, frankly, than anything else I do.

Colony returns to Bravo for season three on May 2.