Coffee with Salma Hayek and the cast of The Hummingbird Project

Sunday coffee with Salma Hayek. As you do. 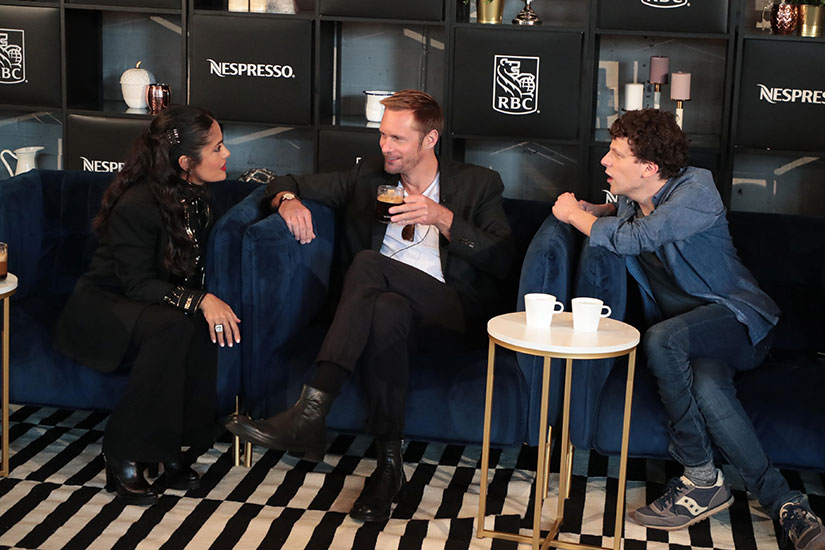 Our Sunday morning java hit will never be the same. On TIFF opening weekend, RBC and Nespresso hosted Coffee with Creators for The Hummingbird Project, which brought cast members Salma Hayek, Jesse Eisenberg, Alexander Skarsgârd, Michael Mando and Canadian director Kim Nguyen to the RBC House to chat about the film.

The Hummingbird Project stars Jesse and Alexander as two cousins attempting to build a thousand-mile-long tunnel from Kansas to New Jersey to gain a one-millisecond edge on the stock exchange. Salma Hayek plays Eva Torres, their former employer and a Wall Street powerhouse who’s looking to take them down.

The panel gave attendees deeper insight into the film’s story and characters, including memorable behind-the-scenes anecdotes like the time Alexander Skarsgârd cut his hand and ended up in the hospital. “It just seemed like karma for the world. If you get to look like that, it’s going to cost you some blood,” joked co-star Jesse Eisenberg.

Here’s what the cast had to say about the film, which had its world premiere at TIFF.

Kim Nguyen on why he wanted to tell this story:

“I wanted to tell a story that would address the madness of our financial system but it’s such a closed intellectual concept that I was looking for a premise that would make it compelling and visual. It’s based on a lot of things that people are doing that are crazy to try to gain those little milliseconds and make millions off of the stock market. It’s not actually one single true story but a lot of the research was done with real engineers, high-frequency traders and even quantum physics experts.”

Jesse Eisenberg on creating moments of levity in the film:

“What was great about the tone that Kim created, which is really unusual, was that the stakes for the characters were incredibly dramatic so it allowed us to be funny in moments because we knew that it would never undermine what the characters were constantly dealing with because it was so intense. It ended up being funnier in a great way than you might expect just hearing the premise of the movie.”

Salma Hayek on finding inspiration for her role:

“I didn’t have to look far. I think I could be that person and many women I know — most women I know — could be that person, if that’s what they had decided to do in life. It shouldn’t be unusual because we’re very capable of bossing people around and having a very specific vision and having the passion to accomplish it. So I didn’t have to do research because I’ve spent my entire life surrounded by these kind of women. I remember saying to Kim, “you don’t know [how important] what you’re doing [is],” because I noticed he really didn’t know how much it was going to mean for women that he made that choice and he decided to also make [her] a minority.”

Alexander Skarsgård on developing his character:

“From very early on, talking to Kim, it felt like we were both on the same page in terms of the character and how to form him and his physicality — the fact that he doesn’t care about material things. He wants his clothes to be comfortable and functional, with pockets that he could put stuff in but he doesn’t care what looks nice.”

The quotes have been condensed and edited for clarity.