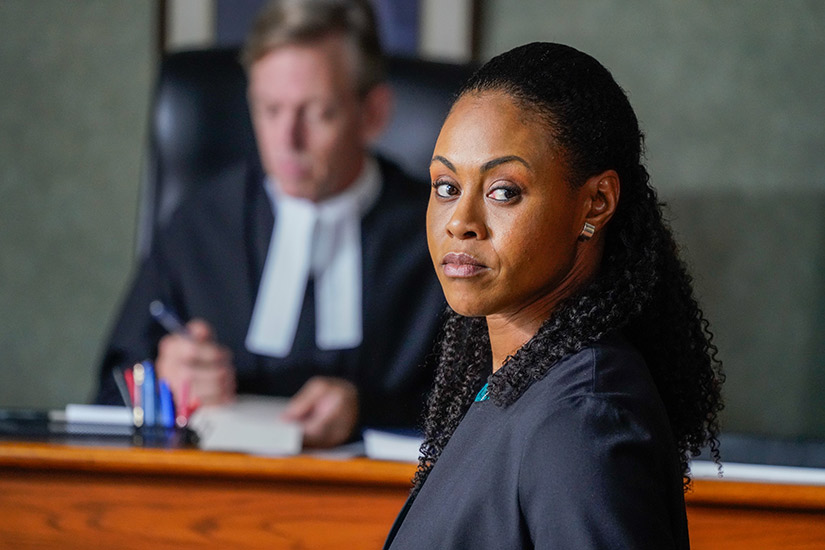 When CBC’s new legal drama Diggstown premieres this week, it’s star, Toronto-born actress Vinessa Antoine, will be making TV history: she’ll be the first black Canadian woman to lead a Canadian ongoing hour-long series (yes, in 2019). “It feels great to be the first, but it also gives me pause and question a lot of things,” Antoine tells us. “Growing up, I didn’t see a lot of me reflected on TV; I didn’t see the world I lived in. It’s about time. Hopefully this is the beginning of a bigger change.”

In Diggstown, Antoine stars as Marcie Diggs, a surfing Nova Scotian corporate lawyer who rethinks her career after her aunt dies by suicide following a malicious prosecution. It’s a role that the L.A.-based actress was excited to take on, and one that required her to leave her fan-favourite character Jordan Ashford on long-running soap General Hospital and return to her native Canada. We caught up with Antoine ahead of the show’s March 6 premiere to talk about the new series, filming in Nova Scotia and learning to surf.

What first drew you to Diggstown?

The script. [Creator] Floyd Kane wrote an amazing, beautiful script with some pretty flawed and interesting characters. Marcie is a type of character we don’t see often, particularly with women of colour. We tend to see black women in a role that is very powerful, very angry—which is great and we’ve seen wonderful TV based on that type of character. But I was very interested in a different narrative. I love Marcie’s vulnerability and her messiness and her questions about her place in the world.

How do you relate to Marcie?

I connected with this role because I do want to see the better in people, or I give them the benefit of the doubt. In the beginning of her career, Marcie’s really held true to that and believed that if you do the right thing, justice will prevail. As we learn more about her, we see that all breaks down and crumble. But I am different in the fact that I was not a surfer before [the show]. I tried surfing years ago and put it away, not only because it’s difficult physically, but, quite honestly, I was dismayed by not seeing people like me on the beach. I felt so out of place, but now I’m starting to learn. I guess I’m similar to Marcie in that sense now.

I’m so happy that I was able to land this role because it’s opened me up to the whole new world of the ocean. I love it. It’s very daunting and scary in the beginning. The ocean changes every single day. The ocean is just so mysterious and it’s been so exhilarating. For Marcie, it’s like her church; it’s her way of letting things go.

It’s so beautiful. Nova Scotia is almost another character in the show itself, so I’m so happy to see the beauty of it and also the underbelly of it, which is not always so pretty. I was almost in every scene every day, so I literally did nothing else but sleep during my two days off. But I ate a ton of amazing seafood and I loved walking around Halifax. It’s definitely a place I would consider living.

Right now, The Affair. I love that the stories are not just told by one singular character.

When I was shooting Diggstown, there was a Canadian woman from Montreal, Jennifer Brodeur, who sent me products. She’s JB Skin Guru on Instagram. She has an amazing line, Peoni. Michelle Obama and Oprah love it. It changed my skin drastically, the most amazing skincare. I literally will not stand with anything else but her products.

A great, well-constructed pair of boots can change the game, even if you’re wearing a $7 outfit.

In Canada, good quality boots will make it or break it.