Can We Please Stop Obsessing Over You’s Attractive Murderer?

Netflix's latest thriller is buzzy for all the wrong reasons. 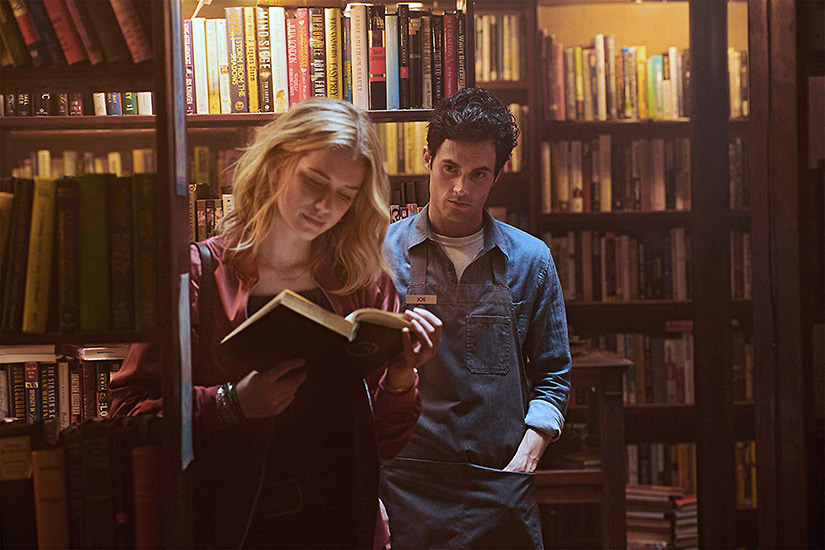 My feelings on psychological thriller You, which made its Netflix debut late last month, can be summed up as this: I wouldn’t call it a good show, exactly—it’d be difficult to be favourable to any show about a quiet bookstore manager named Joe (Penn Badgley) who meticulously stalks a graduate student known to her friends as Beck (Elizabeth Lail)—but I also devoured it over the course of a single weekend and had a lot of fun doing so. Badgley is perfectly creepy (well prepared from his time as the titular anonymous blogger/stalker on Gossip Girl); the plot is wild, in the way the best binge-worthy shows are; and Canadian Shay Mitchell’s portrayal of Beck’s over-the-top, jealous-but-justifiably-suspicious BFF Peach Salinger (yes, as in that Salinger) is, dare I say it, iconic. (Seriously, Google it. Odes have been written.) And I was cautiously optimistic that You could be a show about the perils of toxic masculinity.

At least, I thought I was being cautious. Yet, as the show found a second, buzzier life on Netflix (it originally aired in the U.S. on Lifetime), I found myself shocked by the number of people cheering for Joe as a romantic lead. Surely, we are past the point of people overlooking the actions of obsessive murderers because they are…hot?

Evidently not. For weeks now, fans have been sharing their opinions—sometimes ironically, sometimes proudly—that Joe is good-looking and therefore kind of an okay guy. That’s after he (spoiler!): stalked Beck on multiple occasions, stole her phone so he could unknowingly read her texts, kidnapped her on-and-off-again boyfriend, murdered that boyfriend and Peach, before ultimately killing Beck. The celebrations of his attractiveness got to be so much that Badgley even began replying to fans on Twitter to reiterate the very simple fact that Joe. Is. A. Murderer.

First, let me be clear: Joe is a bad dude. There’s no grey area about it. Don’t for a second think that he has nobleish intentions, or that his traumatic past (because of course he has one) excuses his actions, or that he’s actually kind of sweet in between stalking sessions. Sure, he has nicely defined cheekbones and a great head of curls. But he can both have a pleasant face and be a terrible person who belongs in prison/should never be allowed near women again. His relative hotness does not absolve him of his many, many sins. So, please. It doesn’t matter how boring you think Beck is (I’d argue that’s kind of the point), or how dreamy you think Joe can be when he pretends to not be a creep. Let’s stop dwelling on it. Both Penn Badgley and I are begging you.

But, it’s not all on you—it can’t be. If the star of a show (especially one that intentionally places an antagonist at its core) has to repeatedly remind fans that his character is not someone to be redeemed or crushed on, that show has failed.

There’s a fine line between satire and just reproducing the themes you’re trying to take down, and You simply doesn’t figure it out. Maybe it’s because Joe is, for better or worse, the main character, and we get an intimate look into his psyche through the show’s many voiceovers. Maybe it’s because Joe’s the only fully-developed character, with glimpses into his history and a (truly inessential) plotline that sees him kindly mentoring his kid neighbour whose mother is in an abusive relationship. Or maybe it’s because next to Joe, who’s capable of acting like he can be decent, all of these characters are intentionally annoying and just terrible human beings. (I love Peach, but I could never stand to be in the same room as her.) You is also not subtle, leaning into the pulpy aspects of its plot and tone. And, of course, it has to be somewhat believable that Beck would actually fall in love with Joe.

To be fair, I have yet to read the Caroline Kepnes novel the show is adapted from, or the follow-up Hidden Bodies, upon which the second season will reportedly be based, so I don’t know what the writers are working with. But my requests for You, as it settles into its new home on Netflix, remains the same. Round out your female characters, don’t romanticize Joe’s “courtships” and stop making connections to the past abuses he lived through to his present-day behaviour. I just want you to be better.