Calling it: The two stars of Thelma are going to be everywhere 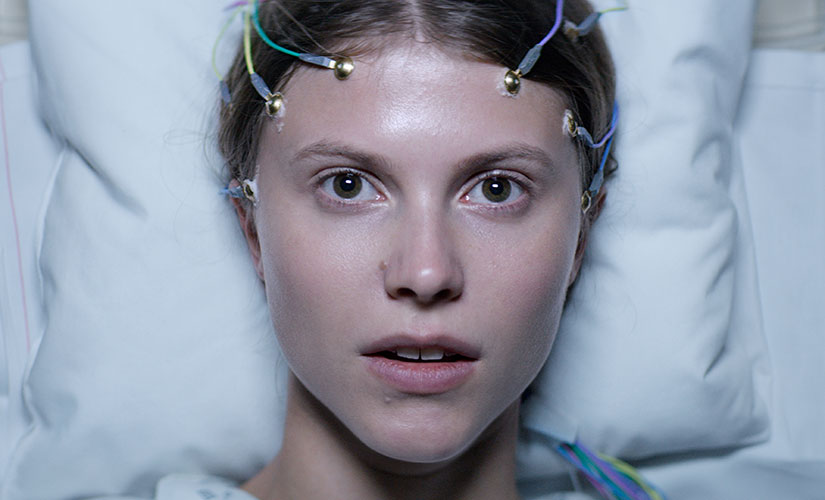 It’s a sunny Thursday during the Toronto International Film Festival. I’m in a luxury hotel room with Eili Harboe and Kaya Wilkins debating the genre of their new movie, Thelma, about a lonely first-year university student who learns she has some very-atypical-for-a-frosh powers. Is it a thriller? Horror? Love story? Gothic coming of age tale?

“I would say it’s a supernatural thriller, but also a romance,” says Harboe, who plays the titular troubled Thelma. “And a coming of age story,” adds Wilkins, who stars as her love interest, fellow student Anya. “It’s all those things.”

One thing there’s no dispute about – the talent of these two up and comers, who command every moment of the latest project from venerable Norwegian director, Joachim Trier. Here are five things you should know about the stars we’re betting you’ll see everywhere in 2018.

It’s the first major movie role for them both. Actually it’s Wilkins’ first movie, full stop. She’s a musician and model who has walked for the likes of Balenciaga, Off White c/o Virgil Abloh and Elie Saab.

Harboe: “I was asked to come to a casting and I was fortunate enough to read the script before I got casted. So I really got a sense of what the story was about and the character of Thelma. I was really excited about her – that she’s both vulnerable and strong. It seemed to me that it would be a very challenging and interesting role to portray both emotionally and physically.”

Wilkins: “This is my first film. I randomly got casted when I was back home in Norway. I live in New York. And I was just like, ‘I’ll try it out. It’s a Joachim Trier film, it’d be amazing to get some sort of insight into what’s going on [in his movies] and maybe meet him or something like that.’ And all of a sudden I’m three auditions in and meeting Eili and I’m getting more and more parts in the script.”

Those stories you hear about two actors hating each other on set is not a thing for these two. In fact, they are so tight Wilkins let Harboe crash at her Brooklyn apartment last summer.

Harboe: “I was immediately drawn to Kaya when she came in to the first audition. The character of Anya was maybe the most difficult to grasp. She could go in so many directions. So there were a variety of girls that I met. When Kaya came in, I thought, ‘That’s her. That’s Anya.’ We had great chemistry from the start. It’s very overwhelming doing her first feature, so I’m super impressed by her presence and genuine portrayal of the character and also being so invested in our chemistry. I think for an actor it’s very important to not just be able to express but also be able to listen. And I think Kaya really has that ability. So I think if she wants to, she really could be an actor.”

Wilkins: “I’m blushing already. I just feel like, obviously, we came in and really vibed, but just being able to do this film with you [Eili], I learned everything from reacting and acting with you. I feel like it’s just been the most I’ve ever learned and I felt so supported and seen from both from you and Joachim.”

They are huge champions of Norway’s fashion scene.

Harboe: “I really admire HAiKw. They’re very innovative. They did a whole show during Oslo Runway fashion week. Instead of a normal runway, the show was a Butoh dance, the Japanese dance. They had dancers and models and the master of Butoh, who is 80 years old, dancing in this beautiful gown, and it was just so moving. I’m studying art history, so I’m really interested in that part of fashion.

Wilkins: I don’t really have that many favourites… I work with so many. This [gesturing to her outfit] is a Norwegian designer. Its part of a suit. Her name is Moe.

Harboe: I think Kaya and I mostly buy our clothes at thrift stores and Goodwill! Or at least I do. I like to find good treasures. I also like to travel and buy stuff while travelling.

Wilkins: “I sang a cover of ‘You’re Still the One’ on Instagram! It was a childhood thing. I was trying to be a bit more niche in my youth and then now I’m like ‘This is the best song ever!’ I’m obsessed with happy songs because I can’t write one. So yeah, that song really makes me happy.”

They are more starstuck by directors than celebs.

Harboe: “I’d love to work with David Lynch. He’s my favourite director, I think. And he’s such a character. So I think he would be very fun to work with.”

Wilkins: “I really like Olivier Assayas films. I think the acting in it is very organic. So I guess I that’s something I would be something I’d be into. For sure. His movies are really great.