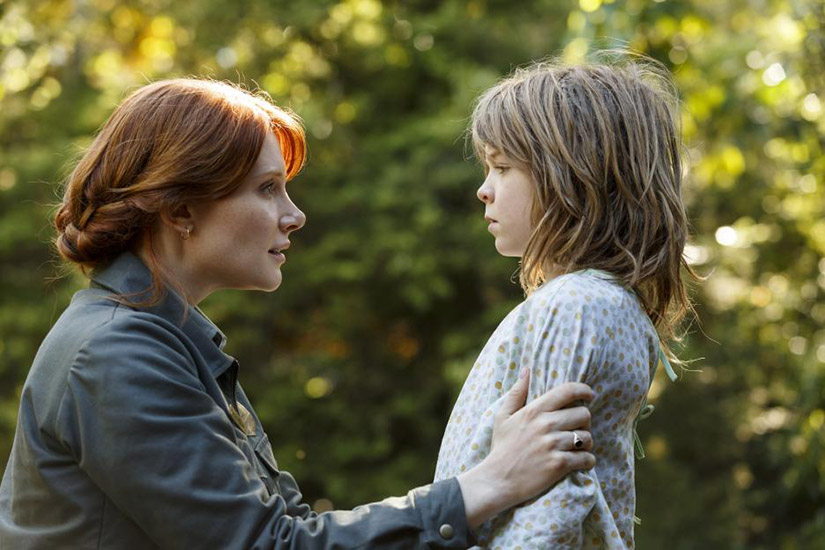 Dismiss Pete’s Dragon, out in theatres today, as ‘just a kids movie’ at your peril’—as grown ups who’ve seen this brand new Disney flick, we can assure you, it’s so much more than just a cute movie about a boy and his pet flying lizard. We can barely talk about it without weeping, TBH. You should definitely see it in 3D so no one sees the tears fall behind your glasses.

And it wasn’t just us: Bryce Dallas Howard lost it too…and she was in the movie. She told us so, curled up in a blanket in Toronto’s Shangri-La hotel, heels kicked off on the floor beside the couch.

Bryce: When I saw it for the first time, I saw it with my husband, and we both cried. It’s just that it’s really emotional and poignant.

ELLE Canada: But like, within the first ten minutes, I lost it.

Bryce: I know. It’s what I love about this movie, it’s kind of one of those classic Disney family films that doesn’t shy away from the realities of life. It’s like Bambi. You see a character lose what you think is everything, and then you see them at the end and it’s incredibly uplifting and inspirational and playful and I think there’s something very ballsy about that, and right about that as well because it doesn’t kind of pander to kids in that way.

EC: It’s a lot like the Lion King in that way.

B: I think it’s interesting that you mention the Lion King, like the Lion King deals with not only the death of his father, but the betrayal of his uncle, him being banished, him thinking that it was his fault, like this is really, really, really…and then everyone starving after the father dies in the kingdom. Like it’s so intense! Super intense! But it’s also that’s what so powerful about it, is that these films represent the real emotions that happen in life to human beings. It represents the human experience. And it represents also kind of a best-case scenario as how to move through those challenges, move through those losses.

EC: I’ve always wondered what it’s like to be the grown ups on the set of a kids’ movie…

B: Well, I’ll say two things about it. So there’s the experience of the performance in terms of being the grown up in a children’s film. That was pretty new for me. And then there’s the experience shooting, being an adult on a Disney set that’s being made with children for children. So in terms of performance, it was, I kept having to think to myself, because when I watch all my favourite Disney movies, I relate to the central character, I relate to the kid. And it was sort of a somewhat mind-bending experience having to remind myself: No, no. You’re the grown-up. You’re the, in the beginning, the non-believer. You’re the person that takes things literally. To be that kind of a character, but to also remember that is a children’s film, and it’s not the adults’ stories that are going to take you on a ride. It’s the kids’ stories. And it also wasn’t a very big step for me having Robert Redford as my father because I’m familiar with having a redheaded actor, director, entrepreneur father. Although I kept joking that Bob was maybe an upgrade. [Bryce’s father is Ron Howard]

B: I was going to say, he’s SO handsome! He’s absolutely incredible.  As far as being on set,  I think that David [Lowery, the director] gathered together the most earnest people on planet Earth. Including the kids. Including Bob. And certainly with David. Like I learned 5 minutes into meeting David don’t make any ironic jokes because he looks at you with these doe eyes because he’s so genuine and so earnest. It was a very supportive, sensitive, innocent set. A very innocent set. My kids were there. It was just this really awesome, very Disney experience all around.