Behind the scenes on Netflix's big new show, The Get Down 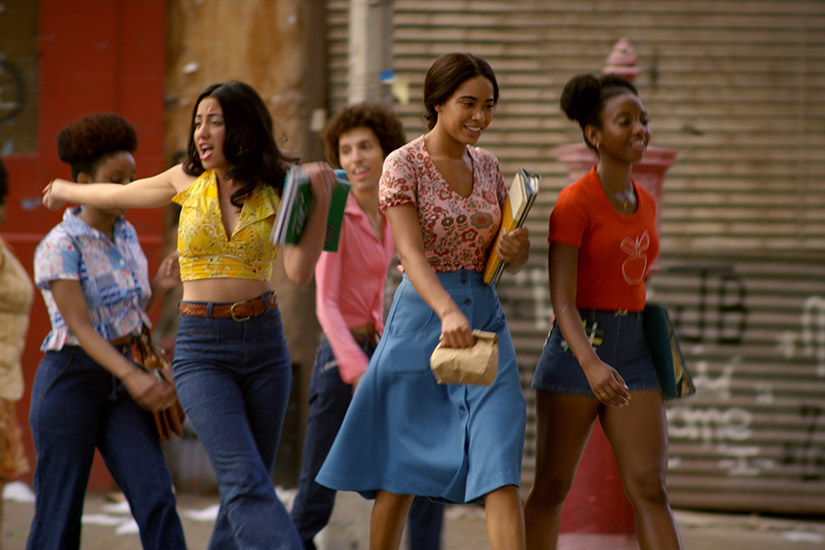 In a hangar-like sound stage on the outskirts of New York City, a group of journalists is waiting for Baz Luhrmann to call “Action!” on the “get down” scene in his new Netflix series, The Get Down. (If you’re not up on ’70s slang, this turn of phrase describes the real groove line in a song.) It’s our first glimpse of all the elements of this ambitious project coming together. I mean, aren’t you a little curious to see how an episodic musical (from the brains behind Moulin Rouge!) about the death of disco, the rise of punk and the birth of hip hop in the burned-out Bronx of the late ’70s ac-tually works in real life? The crowd of bell-bottomed, Afroed and floral-polyestered extras is restless in a nervous sort of way. They’re all ready to spring into “We’re having so much fun at this street party!” mode at the director’s word.

The principal cast members—a quartet of young men in matching T-shirts—are primed for a big moment in each of their characters’ plot lines. For this scene, the band is “getting down” for the first time in front of a crowd of rowdy, sweaty Bronx dwellers in 1977. But before the cameras can roll, Catherine Martin, legendary costume and production designer (and Luhrmann’s wife), spots something. Way up on one of the balconies, the soles of an extra’s tennis shoes are bright white. Problem? They look too new.

We see that same obsessive attention to detail when we are invited to talk with Luhrmann in a record-label office, with its piles of vinyl and macramé hanging chair, that Martin has meticulously reconstructed for the show. He speaks passionately about everything from the series’ origin story (he saw some graffiti in Paris that made him wonder how hip hop got so huge in France) to the death of disco (which the series also charts, especially as it intersects with the rise of rap music) and why he chose to tell the story on Netflix (“It has a culture of aggressively changing the paradigm,” he says, which is not unlike his own mash-up approach to creating).

The only time he does pause is to introduce his wife, who is the calm counterpoint to Luhrmann’s frenzied (but infectious) enthusiasm. “I actually stood in Times Square in 1975, when I was 10,” says Martin. “I didn’t see any of the vices; all I saw was the incredible lights, and I thought it was the most beautiful sight I’d ever seen.”

And, honestly, that’s a good way to summarize how it feels to watch the “get down” happen when the scene gets rolling. Sure, it’s set in an era of widespread poverty,
political turmoil and scuffed-up Converse runners, but as I watch the crowd dance to the young men’s music, two things come to mind: The Get Down definitely works, and it’s beautiful.