Ayanna James Breaks Down the Fashion of Insecure Season 3

Look out for more emerging designers, statement T-shirts and "lots of eye candy," according to the show's costume designer Ayanna James. 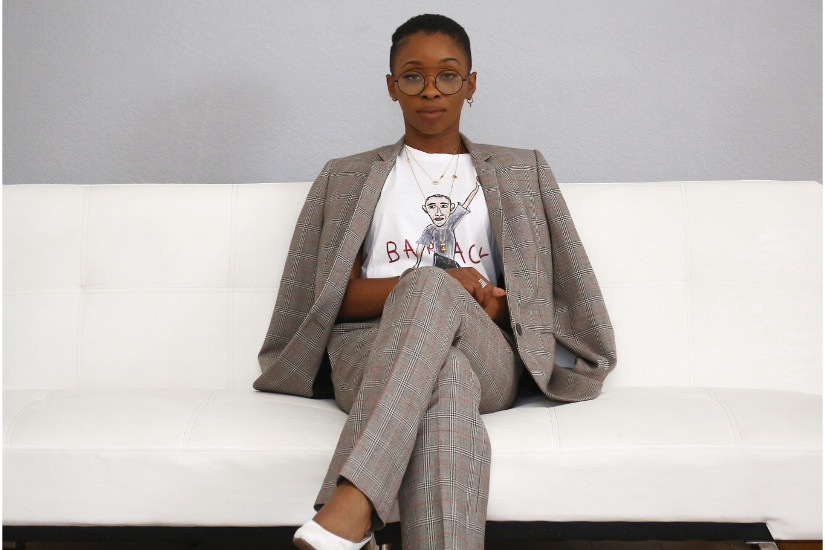 Did you approach this season any differently in terms of designing?

I was just as intentional with the brands and graphic tee placement as I was in season two. This season was really just about maintaining the stylish look, while continuing the work I do with indie designers. I had a much clearer idea of what I wanted the characters to look like. After two seasons, I can spot out the perfect pieces much faster. Season three picks up a few weeks after Issa moves out of her apartment. I wanted the show to still feel familiar stylistically but also fresh. Walking that line is challenging and fun.

Has Issa’s wardrobe changed at all to reflect where her character is at this season? How?

Well, when we start season three, Issa has been sleeping on Daniel’s couch. She showed up to his house with a duffle bag so we can expect to see some repeat outfits. She still speaks through her T-shirts and we’ll also see her infamous We Got Y’all cardigan from season one. (Bonus: it’s from my wardrobe)

And what about Molly?

We ended season two with Molly proclaiming her worth and looking for greener pastures elsewhere in her career. We can expect to see the same stylish suiting and variations of real office fashion. Outside of work, she ups her designer labels and keeps it NYFW cute. Sleek silhouettes, covetable shoes and colour!

With Lawrence out of the picture this time, will Daniel emerge as the fashion guy on the show? What’s his style like? How is it different from Lawrence?

ABSOLUTELY. I can’t wait for the viewers to see Daniel’s style evolution. We’ll get to see a bit more of his personality as he and Issa navigate their (non)relationship. It’s fun to watch. Streetwear is luxury fashion! You’ll see Daniel in a mixture of Dries Van Noten, Fear Of God, Supreme, Marna Ro and a collection of Nike’s that really does rival Lawrence’s closet. He wears a cream knit Playboy x Supreme zip cardigan that I couldn’t wait to put on him. Lawrence, on the other hand, is a tech guy. His style is cleaner with less flair. You’ll absolutely get your eye candy this season.

Did you return to some of the same labels for the characters? Any new ones?

Yes! I worked with Dries Van Noten, Shop Soko, Collection LA’s Vintage jeans, Melody Ehsani, Manu Atelier and Brother Vellies. This season Building Block, Third Crown jewelry, Cotton Citizen and Marna Ro were all on my radar and made it on camera.

Can you tell me about dressing the other ladies in the friend group? What do Tiffany and Kelli’s clothes say about them?

Kellii has a really casual fly style. You never know what’s going to come out of her mouth, so I tried to keep her easy yet sleek. She wears funky earrings and Kat Maconie heels. Tiffany is the bougie friend. She’s fly yet conservative. I recently got married and don’t feel the need to wear dresses that are skin tight and jeans that look painted on. I imagine Tiffany feels the same. She’s the one who doesn’t have to try any more. She’s wifey goals.

Are we going to see more amazing T-shirts this season?

Some of the shirts were so awesome we couldn’t use them any more. I’m very particular about the shirts I use. I would place T-shirts that fit Issa’s mood during season two. I tried to have the same fun this season. The biggest takeaway is it’s always a great way to showcase emerging designers.

When you’re dreaming up a look for a character, what’s your process like? Is there something from that thought process that can translate to dressing for real life?

It’s really all about the writing for me. I read in between the lines of the script to flush out a character profile. I’ll often speak with the writers and producers to come up with a back story or get some sort of context into the history of these fictitious people. From there, I’ll shop based on the cast and see what looks work. I also like to work in tandem with production design–I’m huge on beautiful colour pallets in scenes and try to get as much information on what the audience will see. I also like to ask actors to recite their lines in fittings. I get a feel on how they’ll deliver when the cameras roll. That also influences what I may put them in. Episodic series move so fast–it’s tough to have everything perfect by the time they yell “action” but my team and I do a pretty good job of creating special character wardrobes.