Assassination Nation Will Make You Rethink Your Relationship with the Internet

Stars Suki Waterhouse and Abra open up about their new movie. 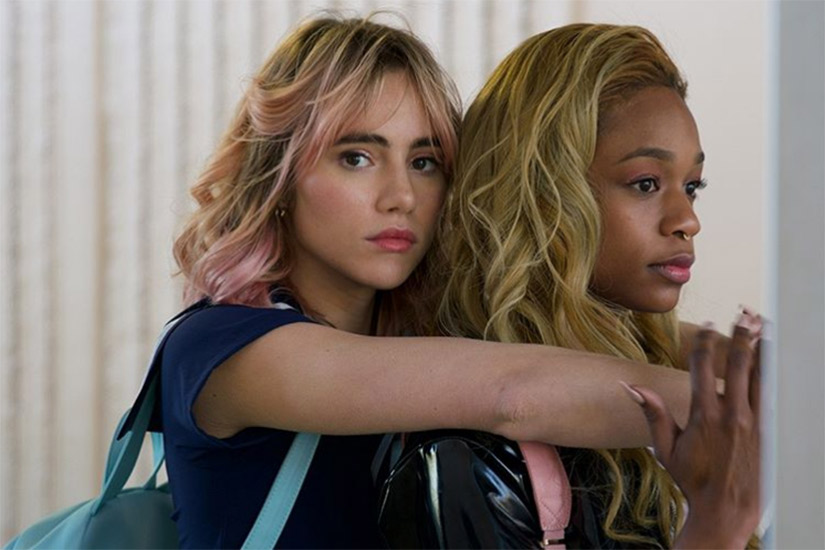 When you’re an actor in the middle of a very busy TIFF, you have to multitask. Sometimes, that means eating lunch in the middle of an interview, which is what happens when we meet model-turned-actress Suki Waterhouse and her Assassination Nation co-star, singer-songwriter Abra. But we definitely don’t mind as the duo snack on their chicken fingers and sweet potato fries, bringing some levity to the our intense discussion about their new black-comedy thriller.

Assassination Nation, which follows a group of four teen girls—one that also includes Odessa Young and Hari Nef—who are blamed and attacked for a hack revealing the darkest secrets in their small town—is like if the worst parts of Twitter came to life. It touches on almost every heavy topic you can think of: sexuality, misogyny, nationalism and our collective reliance on social media and the internet. It’s a lot to handle, both on screen and IRL, which is exactly what the movie is going for. “That’s what drew me to be part of this conversation [the film creates],” Abra told us. “It’s a catalyst for you to look at yourself and society.”

We sat down with the two actors to discuss their new movie, which hits theatres on Friday, how they feel about social media and bonding on set.

Why did you both want to be a part of Assassination Nation?

Suki Waterhouse: Being online and how viciously we can go around cementing what we deem to be true scares me. Being on the receiving end of it can be so damaging and we’re kind of operating in this new world where looking at your phone is terrifying. It’s a very violent new reality we have, and you’re told to be transparent and talk about your feelings, but, for me, the internet doesn’t feel like a safe place to do it.

Abra: The takeaway is really just to be more forgiving and empathetic with others and yourself. Use less judgement and realize you don’t have to feel one type of way about something or make a knee jerk reaction to it.

SW: There’s an adrenaline behind it. You can post a picture and get loads of likes and that raises you up, but in the same afternoon, I can go on Twitter that gets at my deepest, darkest insecurity.

A: It’s intense, it’s hectic, it’s really chaotic. I personally don’t like feeling like my power is externalized, like someone else has control over my day, my emotions. I’m not going to say I don’t like it, but it’s very uncomfortable. All this access is really cool, but I feel very vulnerable online.

Abra, this is your very first acting role. Was it challenging to jump from your music into a big movie like this?

A: It was really crazy. I had to learn to draw my boundaries. Who am I? Where do I end and where does my character begin? All of my experiences couldn’t fit into this character and they didn’t need to. It was hard at first, because the movie is super emotional, like watching my “mom” get attacked and tied up, and we’re getting beat up by police. As a woman of colour, it was really hard to separate myself. I worked through things I didn’t get to as a kid—that I didn’t think I needed to—filming this movie. It solidified me as a person and showed me how to define myself and speak up, and that the more that I live and express myself, the more I can grow into myself.

Obviously, the core cast of the movie is this group of young women you’re part of. What was that experience on set like?

A: It was fun. I’d never been part of a tight girl gang, and I guess that’s the only thing that really survives the movie—the friendships. And that’s super dope.

SW: That’s the thing, once the movie’s out it’s not really ours anymore. It’s cool to observe, but it’s the actual experience of shooting it that [sticks with you]. I will always remember our conversations and how my mind just grew massively. I was super inspired by all of them.

Do you have any favourite moments from shooting?

A: We got to shoot the last scene on the last night and before we went out to shoot the scene, we had a moment like, “This is our last scene, you guys are my friends, I f**k with you, let’s go kill this mob.” It was super authentic. Seeing women empowered in a really fantastical way was super, super sick.

SW: We’d listen to Abra’s songs a lot, actually. I was called Suki Boomhouse because I just carry around a boom [box] with around me at all times and I have an app too.

A: If we lost her, we could always find her.

SW: One day we put on Britney [Spears] and we were in an actual high school in absolutely amazing outfits and we were…

A: …dancing on a basketball court.