In Shondaland’s latest series, the Inventing Anna, Veep star is turning the table.

“In case you haven’t noticed yet, I talk too much,” Chicago-born actor Anna Chlumsky tells me 27 minutes into our conversation. She doesn’t, but one thing is immediately clear about the star, who is known for making us cry, both from heartbreak (as Vada Sultenfuss in My Girl) and laughter (as political aide Amy Brookheimer in Veep): She has a palpable, insatiable curiosity that drives everything she does. It’s why after Veep wrapped its seven season Emmy-winning run on HBO in 2019, she wanted to play a journalist so badly.

“One of the many reasons I do what I do is that I’m insecure about asking questions,” she says. “I get afraid that I’m invading somebody’s [space]. That’s why I’ve always admired the reporter’s mind and have been really inspired by that.” So when the script for Netflix miniseries Inventing Anna, which dropped in February, came across her desk with its juicy journalist role, she knew it was the part for her. And that was before she learned it was the first series Shonda Rhimes had conceived since the hit political drama Scandal.

Inventing Anna was adapted from a viral New York Magazine article by Jessica Pressler (a.k.a. the writer who penned the story that Hustlers is based on) about Anna Delvey—or perhaps she’s actually Anna Sorokin. It’s hard to know. The young woman adopted an alias and pretended to be a German heiress to scam her way into New York City’s most elite social circles, defrauding hotels, banks and über-rich acquaintances in the process. Starring Ozark scene-stealer Julia Garner, the series follows the rise and fall of Delvey as Chlumsky’s Vivian, a determined reporter seeking redemption for a career misstep, tries to figure out the answer to the question on the top of everyone’s mind: Who is Anna Delvey, really? And, of course, it all unfolds in the lush, fast-talking, hyper stylized fashion that Rhimes pioneered with shows like Scandal, Grey’s Anatomy and Private Practice. If TV were a glossy mag, she’d be the inimitable editor-in-chief sitting at the top.

After getting the role, Chlumsky met with Rhimes and her long-time collaborator, Betsy Beers, for a “ladies-who-lunch type of meeting” to discuss the show, and the trio immediately hit it off. “I was thrilled to just talk Shonda’s ear off,” says Chlumsky, laughing. “We were all sort of finishing each other’s sentences and were excited about life, writing and this project. We were really, really simpatico.” 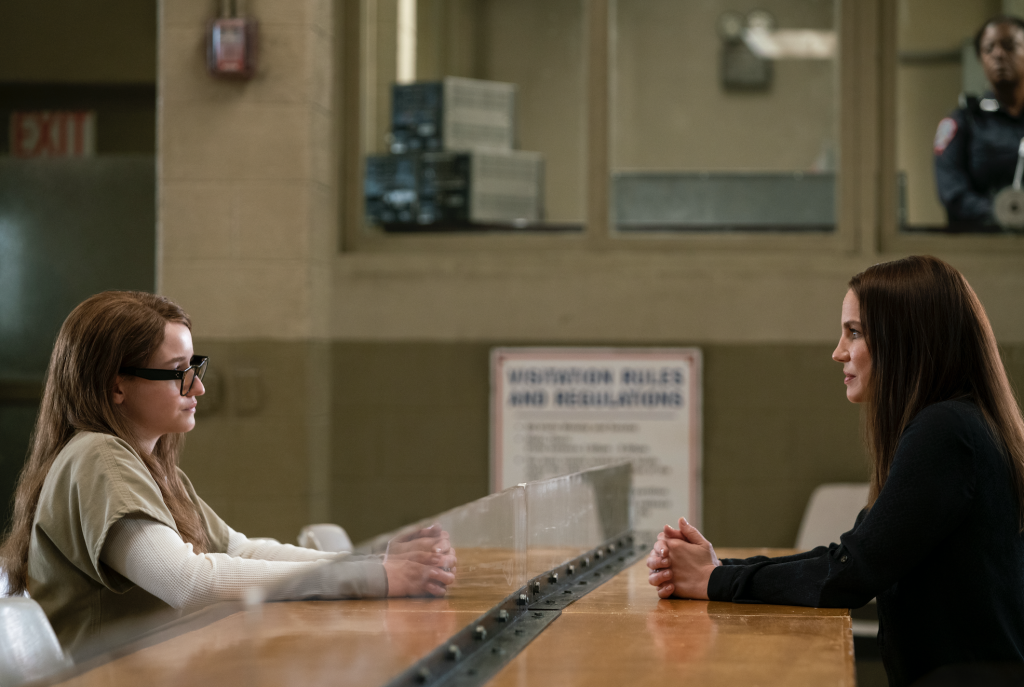 Even before that lunch, the actor felt a natural connection to the material because it was posing the sorts of questions that motivate her work. Yes, Inventing Anna is a salacious look at a salacious story, but it’s also about authenticity, truth, friendship, class and gender. And it’s clear why a character like Vivian appealed to Chlumsky: They share tenacity, a hunger for knowledge and an urge to share that knowledge with others.

There was also a sense of trust on-set. While Inventing Anna and Veep are very different shows in terms of subject matter and tone, their creators both have specific and distinct voices. Working with Armando Iannucci (who was at the helm of Veep and directed 2009’s British satire film In the Loop, in which Chlumsky starred), Chlumsky learned how to have faith in the creative process. She’d show up and get her job done knowing that not only would everyone else do the same but their collective effort and passion would show up in the end result too. And although entering the Shondaland universe was daunting for Chlumsky, there was a similar sizzle on-set—thanks to Rhimes’ “masterful hand”—that made it feel like everything would be okay. “I had such a blast doing this show,” she says. “I adored walking onto the set and not feeling like I had anything to prove. It was heaven.”

So now that she can check “journalist” off her acting bucket list, what’s next for Chlumsky? Of course, there are things she’d like to do—she’d love to wear a corset in a period drama and has dreams of one day directing an opera—but above all, Chlumsky wants to feel like she’s part of something communal. In her mind, it’s still hard to pinpoint exactly why Delvey’s story went viral in 2018, but what matters to her is that it did. It was an indelible experience that pulled people out of their usual social-media bubbles and, for a brief moment, had everyone talking about the same thing, much like, say, HBO’s The White Lotus did or Oprah’s interview with Meghan Markle and Prince Harry. “What makes something connect?” asks Chlumsky. “That’s what I’m personally interested in. It’s magical, in a way—sort of supernatural—when the whole world can share in one thing.”

Read more:
Domee Shi Isn’t Done With the Growing Pains of Life
Bridgerton’s Kathryn Drysdale Is Having Her Moment
Zoë Chao Is Finding Beauty in the Mysteries of Life