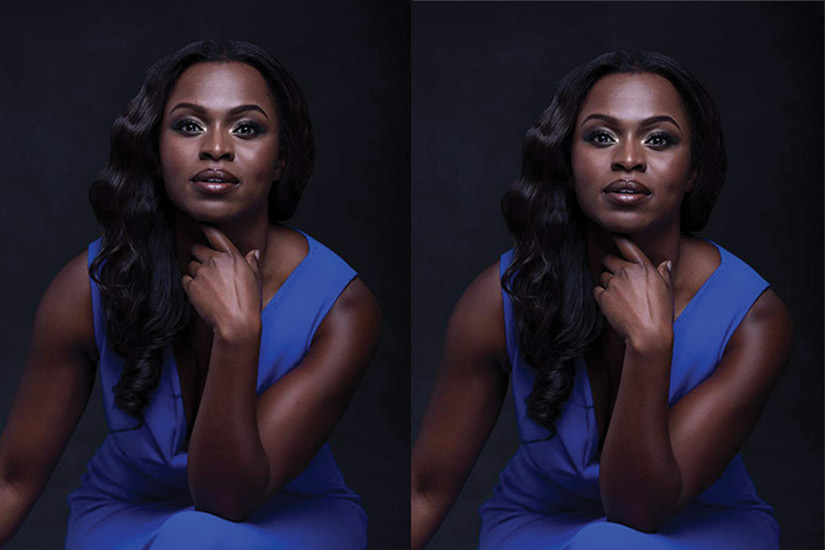 American Gods star Yetide Badaki is a major geek—her words, not ours. In fact, she takes so much pride into her nerd cred that her role as an ancient goddess in the adaptation of Neil Gaiman’s bestselling novel (a book she loves) is kind of surreal. “I have a moment of glee every time I get to see something [on the show] for the first time,” she says, laughing. “It’s always such a thrill. I have to remind myself while watching, ‘Oh, Yetide, you were there.’”

In the second season of American Gods—which started streaming in Canada on Amazon Prime Video on March 11—Badaki returns as Bilquis, a.k.a. the Queen of Sheba, one of the old gods seeking worship in a tech-obsessed world. (Let’s just say her methods are…interesting. If you know, you know.) We caught up with the Nigeria-born actress (who you may also know from This Is Us as Chichi, a single mom who’s friends with Randall’s biological dad William [Ron Cephas Jones]) to talk about the hit fantasy drama and owning her power.

I know you were a big fan of Neil Gaiman’s book before doing the show. How do you separate the fangirl side of yourself from the professional actor?

Bilquis is very different from Fangirl Yetide—everyone I meet at every convention always finds that out very quickly. I always tell fans I’m not actually terrifying, like, “Look, I’m just a geek playing in this incredible sandbox.” After we talk for five minutes, they’re usually like, “Oh, you really are a fangirl.” [Laughs] Actors always find the anchor, the core, the part that draws you to a character. With Bilquis, it’s things like the immigration story, the struggle of being a woman in trying times. Those things resonate.

What about those things resonate for you?

It’s only been about four or five years of actually having my [American] citizenship. I’ve experienced, very keenly, being from one country and becoming part of the tapestry that is the U.S. Seeing Bilquis find her place in a world that is different from the one she originally knew, I immediately connected with that feeling, even just in reading the book. And insofar as the experience of women, one of the lines people often refer back to is when Mr. Nancy is speaking of Bilquis in episode one as a woman whose power is being taken away. There’s been a strong resonance in that sentiment, especially in the last year. And add to that being a woman of colour. We see examples of it every day.

What does it mean to you to tell stories that are so important to you personally and to the audience?

That is everything to me; it’s the only reason I’m an actor. I always wanted to tell stories because from a very early age, I saw the power of storytelling, the power to allow people to empathize. I remember the first time stepping on stage and feeling the way the room came together like an electric circuit. It means the world to be me to be a part of that circuit, and hopefully add a little touch of empathy and love to our current existence.

What’s your favourite thing about being a part of this show based on a book you love?

When I was younger, a lot of the company I kept was in books. I was a shy little girl. There are moments on set where I’m speaking these words looking across at people like Crispin Glover and Gillian Anderson…it’s literally a dream come true. And to be able to play this goddess? We’re often told to hide and do less, be a little less. But when you see these incredible women characters just own the power that is within, that speaks right to the power within you. It’s permission to celebrate the strong parts of yourself.

Who are some other characters or women who have made you feel that way?

I’ve been binge-watching Pose recently, and Elektra is such a fascinating character. She comes out and does a walk and is fully there. I find myself saying, “YES!” to an empty room and celebrating her. There are incredible artists who do that to me, too. Frida Kahlo, Elizabeth Taylor, Janelle Monáe, who walks her own path, or even before her, Janet Jackson. And one woman we’ve all been affected by: Oprah! She has been living in her power for years and encouraging us to do the same.

Apart from American Gods, you’ve also had a role on This Is Us. What have you learned from that experience?

What’s interesting as an actor is you get to stretch those muscles and play different facets of people. But what I found really fascinating was the many similarities [between the characters]; situations that on the surface may seem so incredibly different, but have so much in common. And of course, I got a master class from incredible performers like Sterling K. Brown and Ron Cephas Jones. I experienced so much kindness, it was absolutely inspiring.

What was it like filming American Gods in Toronto?

Everyone who knows me has probably had an earful about how much I love Toronto. I loved eating at Lee, the food there is ridiculous. They have a 19-ingredient slaw I can’t get enough of. And there are so many beautiful shops and art installations in the distillery district. It was such a welcoming city. I felt at home.