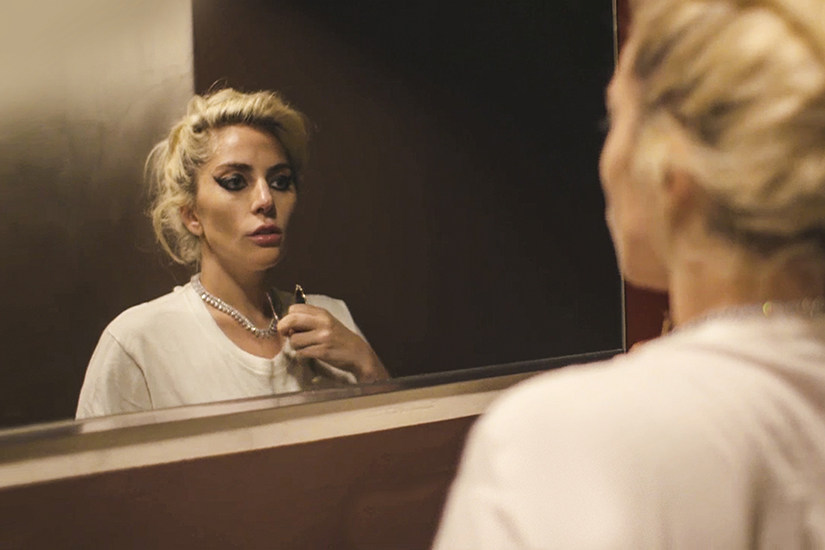 The much-anticipated Gaga: Five Foot Two has been streaming on Netflix for a few days now, so there’s a good chance you’ve seen it already, in all of its emotional, fascinating glory. Like us when we saw it before its world premiere at the Toronto International Film Festival, you probably have a zillion questions after viewing this intimate portrait of the pop star and the making of her most recent album, Joanne. Luckily for you we sat down with director Chris Moukarbel a behind-the-scenes perspective on the doco.

What was it like for you, as the human behind the lens, making this film?

I was there alone a lot of the time, because a lot of the shoots happened last minute, sort of whenever she would give me an opportunity. Often, the condition was that I would have to come alone because it was either, she was working in the studio and didn’t want to be distracted, or it was a sensitive, more intimate situation. I was constantly knocking on that window and it would open and close, sort of randomly, whenever she felt she could let me in.

Did you know from the beginning what sort of film you wanted to make?

I didn’t want it to be an expected, conventional portrait where we see her plucking at the piano at ten years old with archival footage. This was a rare opportunity to do something that was very close and intimate with a really narrow scope. Even though I am, to a certain extent, assuming people know who she is, I still tried on this audience member who maybe has no idea and would they still track with this person? Meaning, establish at least in the beginning that she has this celebrity and has this world that she’s part of, and yet learn with her as she gets back into it and grows back into Lady Gaga, that it takes a toll on her in certain ways.

There’s a scene midway through the movie, where she’s having a conversation with someone and then turns to the camera and says, “Don’t you dare use any of this.” How did that end up in the movie?

That was something I had to present to her and ask permission for because she has agency in this completely. This isn’t an exposé. It’s something that I wanted her to feel good about, even if it is tough at times. She didn’t watch the entire movie, but she was shown certain scenes to make sure she felt comfortable with certain things. She would sign off on it.

Gaga spoke very naturally in these, sort of, soliloquys. Is that you sitting behind the camera being like, “Hey, what about ‘x’?”

It doesn’t take a lot to get her to talk about something she’s interested in talking about. And if she’s not, she just wouldn’t. I would ask her like, “What just happened inside?” something really vague, just to see if she wanted to talk about it. And if she did, she would give me her perspective. I don’t do interviews in the film, like real sit-down interviews with her or anybody else but I realized early on that she was just going to talk to the camera because she was just doing it anyway. For her to feel comfortable doing this, there was no way she was going to pretend like the camera wasn’t there. It’s not a reality show. It was just like, “What is it like to be Lady Gaga and have a camera in your face, in the studio while you’re working?”

Is there anything else that you shot that you were later asked to not to include, for real?

There were subjects that she didn’t necessarily want to go into the movie, and there were times where she told me to turn the camera off. Usually it wasn’t about her so much as if it was about someone else—like if they were talking about someone else, or if somebody else was in the room.

Was your camera rolling literally from the minute you would show up?

I would just shoot. It was very casual.he certainly wasn’t going to do anything special for me. All she gave me, really, was permission. All things considered, she’s somebody who has spent so much time in front of the camera for so long for so many years, that she’s learned how to really just tune it out, because otherwise she’d just go crazy. More than most people, I felt like she really did totally forget about me.

Gaga is an artist who is very famous for an obviously constructed persona. Did you ever feel like you were still getting “the show”, even in these off duty moments?

That was something I was personally hyper-aware of going into this, like how to get past that preconception that a lot of people would have. It’s frustrating because I know how the film was made and I know how real it was. Now that said, it’s a film—it’s edited, it’s stylized, it’s impressionistic. I’m creating a portrait. There’s no objective truth here. It’s really the way I wanted to show it.  It’s manufactured by me and my team, to a certain extent, and by her in the sense that she obviously could choose to not have me see something or be present for something. But as far as a documentary goes, it’s probably one of the more raw because of the way it evolved organically. There really wasn’t a production team that had made some deal with her and there was a list of things you could and could not do. [Gaga] is kind of a purist with the things she does. Like if she’s going to be a pop star, she’s going to be the biggest pop star in the world, if she’s going to be an actress, she’s going to take it so seriously and train all the time. And so, to participate in the documentary, she understood that, “Okay, for this to be good, I need to just relinquish a lot of the control that I would typically have over something” – in order for it to be the best version of what it needs to be.

Gaga makes an oblique Amy Winehouse reference at one point in the film that was super moving…like she couldn’t even say her name when she references her.

Amy was sort of a little bit of a spirit that was around the film, because Amy wrote and produced Back to Black with Mark Ronson. And Amy was a friend of Gaga’s, and obviously Amy and Mark were very close, and then now Gaga was working with Mark. You felt Amy’s presence in the studio a lot. When she died it hit really hard for Gaga and for everybody in their world. Gaga is a survivor of something that not a lot of people survive–which is becoming super famous as a musician at a really young age. A lot of people talk about it as a Faustian pact and to an extent, it is that. She invited it in and she wanted it because she was young and felt like she had a lot to share with the world. She’s obviously really grateful for it, but it does take a toll on a lot of people who don’t maybe have the support system like that family she has. They don’t really make it passed 27. She’s very aware of that threshold and where she’s at right now.