In celebration of its 15th anniversary. 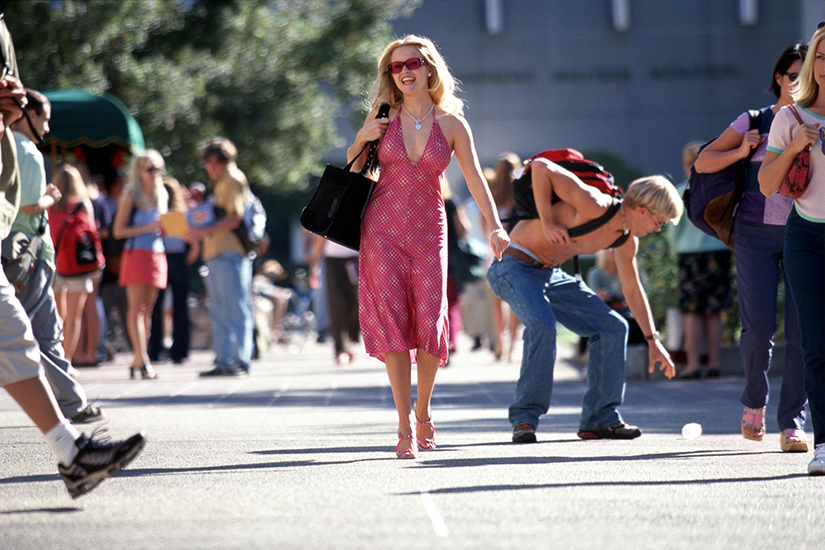 1. American Psycho isn’t the first film that comes to mind when you think about Legally Blonde’s influences. But legend has it that plucky heroine Elle Woods was inspired by Evelyn Williams, the social-climbing socialite Reese Witherspoon had played in American Psycho the year before.

2. Reese famously bonded with Moonie, the adorable chihuahua who played Bruiser – so much so that when she was given a star on the Hollywood Walk of Fame in 2010, he accompanied her. When Moonie died earlier this year, her Instagram tribute made us all cry a little bit.

3. Remember when Elle’s feminist classmate Enid said that the word “semester” is sexist because it refers to semen? Not true, in case you’d been wondering all this time.

4. Legally Blonde 2: Red White & Blonde is a thing we’d all be better off forgetting. But despite that flop of a sequel, a third movie was being considered for a while – and Witherspoon is still getting weird pitches for it to this day.

5. Elle Woods brushing her hair during the opening credits is one of the movie’s most iconic images – but it’s also an illusion. Reese Witherspoon’s filming schedule for The Importance of Being Earnest overlapped with Legally Blonde, so the hair-brushing blonde was a stunt double. Sad face.

6. It’s hard to imagine anyone but Witherspoon playing Elle Woods, but a slew of other big names were considered including Charlize Theron, Gwyneth Paltrow and Alicia Silverstone. The latter would just have been too weird, because all we would see is Cher Horowitz.

7. Harvard is nobody’s third choice… except the producers of Legally Blonde. Elle attends Stanford in the novel upon which Legally Blonde is based, but Stanford’s administrators didn’t like the script and refused filming permission. The University of Chicago also balked, specifically because of the scene where a professor hits on Elle, and that’s how the film ended up being set at Harvard.

8. The final “two years later” scene, in which Elle gives her valedictorian speech and her former boyfriend Warner gets his comeuppance, wasn’t originally in the script. Test audiences wanted to know what happened to Elle, and so the scene was added in despite a whole lot of hassle. Both Witherspoon and Luke Wilson, who played Emmett, had to wear wigs for the scene because their hair had changed so radically since principal photography. Witherspoon and Matthew Davis (Warner) filmed their parts in England, while shots of the other cast members were filmed in LA and edited together in post-production. Good thing the scene was worth it.