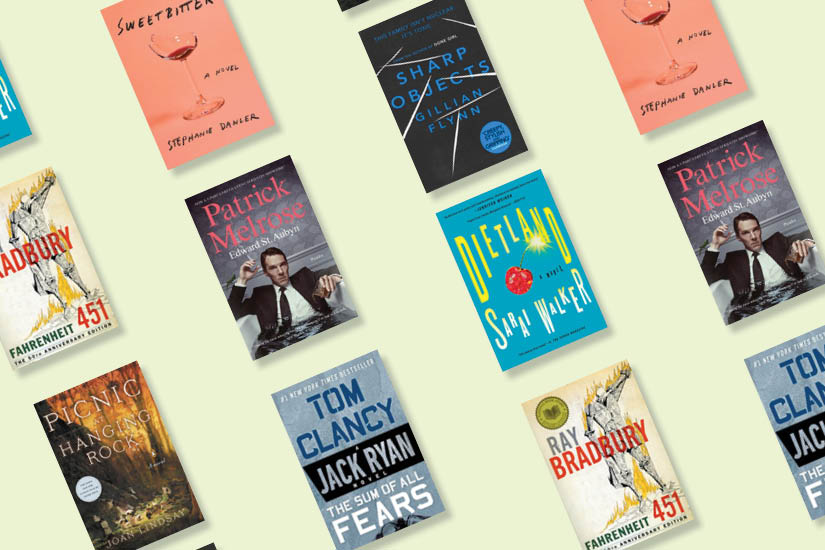 Warmer weather is finally upon us, which means spending as much time possible outside soaking in the sunshine. Yeah right. If you’re like us, you’ll be able to stand the heat for an hour—max—before withdrawing to your living room to bask in the A/C. Luckily, there’s plenty of new TV to keep you busy. Or, if you insist on sitting poolside, why not take the book version out with you for company?

The Book: Sweetbitter by Stephanie Danler
Hits Screens: Sunday, May 6 on TMN Encore at 10 p.m.

You don’t really need an excuse to pour yourself a glass of wine and relax in front of the TV, but The Movie Network Encore’s new drama Sweetbitter gives you the perfect one. The six-episode first season, based on Stephanie Danler’s must-read debut novel, follows Tess, who lands a job at one of New York’s best restaurants just after moving to the city. Tess quickly becomes consumed by the drama-filled NYC food scene and trust us, you will too.

The Book: The Patrick Melrose novels by Edward St. Aubyn
Hits Screens: Saturday, May 12 on CraveTV at 9 p.m.

Benedict Cumberbatch is no stranger to playing characters adapted from books (hello, Sherlock), and his latest role is no exception. The Brit stars in the titular role of Patrick Melrose, a five-part limited series based on the semi-autobiographical novels by Edward St. Aubyn (the first of which was published in the ‘90s). Each episode of the darkly comedic show is based on one of St. Aubyn’s novels, following Melrose from his traumatic childhood through to his severe addictions and recovery process as an adult.

The Book: Fahrenheit 451 by Ray Bradbury
Hits Screen: Saturday, May 19 on HBO Canada at 8 p.m.

Okay, technically, HBO’s Fahrenheit 451 isn’t a TV show, it’s a movie—but one you can watch from the comfort of your home the same night it premieres. Michael B. Jordan stars as Guy Montag, a fireman charged with burning books who questions the censorship behind the task. Michael Shannon plays Montag’s boss, Captain Beatty, while our fave Canadian YouTuber, Lilly Singh, also has a role in the movie.

Revenge fantasy meets dark comedy, Dietland, dives into the media and beauty industries at the same time it explores vigilante justice against men who have been accused of sexual assault. Joy Nash stars as Plum Kettle, a ghostwriter for a popular advice column who struggles with her body image and self-acceptance. Amidst it all, Plum finds herself split between two “sisterhoods”: one who preaches female empowerment and one who may in fact be responsible for the violent vigilantism.

Game of Thrones alumnus Natalie Dormer takes full advantage of the tiny sunglasses trend in the newest adaptation of Joan Lindsay’s 1967 novel. Dormer stars as the headmistress of an Australian school from which a group of girls disappear while on a field trip. The mystery unravels over the miniseries’ six episodes, which keeps the novel’s original 1900 setting.

A few years after Gone Girl (both book and movie) blew our minds, author Gillian Flynn’s debut novel is getting the TV treatment. Academy Award-nominated actress Amy Adams stars as Camille, a journalist with a history of self-harm who returns to her hometown to investigate the murder of two young girls while dealing with her complicated past. Canadian Jean-Marc Vallée (Big Little Lies) directed the eight-episode series, while Flynn herself worked as a writer on the show.

Jim Halpert, is that you?! The Office’s John Krasinski completes his transition to full-fledged action star, becoming the fifth actor to take on the role of Jack Ryan. For the uninitiated: Ryan is a CIA analyst who frequently finds himself in the middle of high-risk, action-packed investigations. In this latest iteration, which was co-created by Lost’s Carlton Cuse, Ryan comes across mysterious bank transfers that leads him to a terrorist organization.