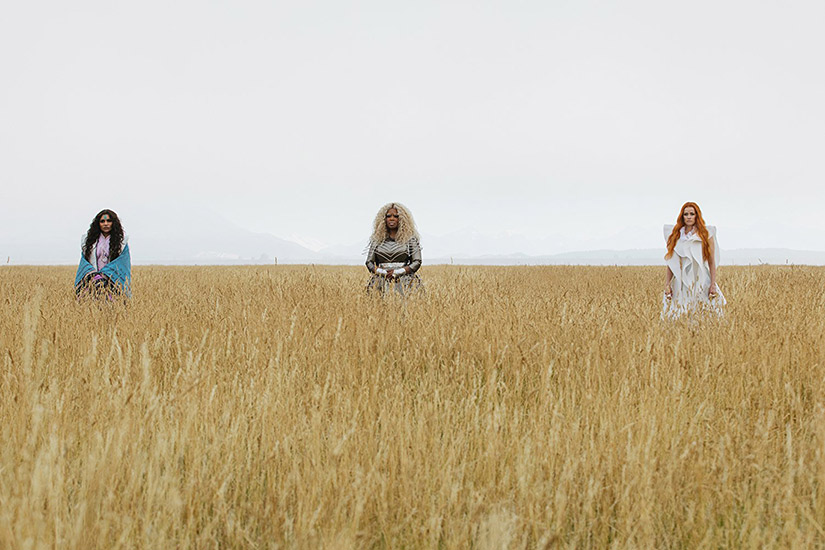 If you’re like us — both an avid reader and lover of movies — you always try to read the book before seeing the film. Well, your to-read pile is about to get a lot bigger, because there are a ton of books being adapted for the big screen in 2018. Here’s a — ahem — small list to help you get a head start on your reading.

The book: Ophelia by Lisa Klein

Release date: Premieres at the Sundance Film Festival on January 22

Something’s rotten in the state of Denmark, but hopefully it’s not Star Wars’ Daisy Ridley travelling back to the time of Shakespeare to take on this reimagining of Hamlet. Ridley stars in the titular role of the movie, which reinvents Hamlet’s would-be wife, the tragic and oft sidelined Ophelia, as the heroine of her own story. The refreshing retelling also stars Naomi Watts and Tom Felton.

Ana and Christian (Dakota Johnson and Jamie Dornan respectively) finally get their happy ending in the final film of the Fifty Shades trilogy. Freed finds the NSFW duo blissfully wed, but their happiness is interrupted when Christian’s ex comes back into the picture and Ana is threatened by her stalker — you know, typical couple drama.

The book: Annihilation by Jeff VanderMeer

Annihilation assembles a group of super intelligent women — including Natalie Portman, Tessa Thompson, and Gina Rodriguez — who head into a dangerous environmental disaster zone. Their goal? Figure out what happened to Lena (Portman)’s husband, portrayed by Oscar Isaac, who was gravely injured and the lone survivor from a group of soldiers who had previously entered the disaster zone. Although Annihilation is based on the first book of VanderMeer’s Southern Reach trilogy, director Alex Garland (Ex Machina) told Entertainment Weekly that he approached it as a standalone film.

The book: Every Day by David Levithan

You may recognize David Levithan, the writer of this 2012 book, as the acclaimed YA novelist who co-wrote the book version of Nick and Norah’s Infinite Playlist. Every Day follows 16-year-old Rhiannon (Angourie Rice), who falls in love with A. Maybe that sounds like your typical teen rom-com, but A is actually a travelling spirit who wakes up in a different 16-year-old body every day, which, as you can imagine, complicates the romance.

By now, you’ve probably seen the sleek, blood-red posters for Jennifer Lawrence’s Black Widow-esque spy thriller, which is adapted from a novel written by a former CIA agent. Red Sparrow finds J-Law as Dominika Egorova, a former Russian ballerina forced into a Russian intelligence program that specializes in seduction. When she ends up falling in love with her CIA mark (Joel Edgerton), she considers becoming a double agent.

6. A Wrinkle in Time

The book: A Wrinkle in Time by Madeleine L’Engle

This children’s classic from 1962 finally hits the big screen this spring with a cast so good, you wouldn’t have even been able to dream it. Storm Reid stars as Meg, a young girl who finds out her father (Chris Pine) is being held captive on another planet and goes off to rescue him. Along the way, she meets three supernatural beings — the always ethereal Oprah Winfrey, Reese Witherspoon, and Mindy Kaling — who guide her along the way.

The book: Simon vs. the Homo Sapiens Agenda by Becky Albertalli

A YA coming-of-age story, Love, Simon stars Nick Robinson (Everything, Everything) in the titular role of Simon, a closeted gay teenager balancing school, family, friends, and an anonymous pen pal called Blue. When one of his classmates discovers Simon’s emails to Blue, revealing that they’re both gay, Simon has to figure out how to protect Blue’s privacy. Keep an eye out for some familiar faces: Jennifer Garner, Alexandra Shipp (X-Men Apocalypse), and 13 Reasons Why’s Katherine Langford and Miles Heizer also star.

The book: Ready Player One by Ernest Cline

Get ready for the most futuristic nostalgia trip of your life. Chock full of references — including to some of director Steven Spielberg’s own work — Ready Player One sees the earth declining in 2045 because of climate change, overpopulation, and an energy crisis. To escape their reality, people enter a VR world called OASIS, where they can engage with other people and a wide variety of activities. When OASIS’s creator dies, initiating a contest to win his fortune, Wade (Tye Sheridan) teams up with friends to win the prize before a giant corporation beats them to it.

The book: Where’d You Go, Bernadette by Maria Semple

Just in time for Mother’s Day, Cate Blanchett takes on the role of the unforgettable Bernadette. An agoraphobic architect, Bernadette suddenly disappears before a family trip to Antarctica. The film is narrated by Bernadette’s 15-year-old daughter, who goes on a quest with her father to find her mother. Richard Linklater (Boyhood) is directing the story based on the 2012 bestseller, which also stars Bridesmaids’ Kristen Wiig and Troian Bellisario (Pretty Little Liars).

You’ll have to wait a bit longer for the much-anticipated movie version of Kevin Kwan’s hit Crazy Rich Asians, which is in theatres this summer. The adaptation focuses on Rachel (Constance Wu), an American-born Chinese economics professor, who travels to Singapore with her boyfriend Nick (Henry Golding) for his best friend’s wedding. Once there, she gets thrown into the drama-filled, ultra-luxe lifestyles of some of Asia’s most rich and famous. Wu, who also stars on Fresh Off the Boat, told Entertainment Weekly that filming in Asia with actors of so many different backgrounds was moving, saying: “Crazy Rich Asians is very special in that it is, I believe, the first American studio movie to star all Asians that is set entirely in a contemporary setting.”

Nick and Rachel, first look exclusive with @entertainmentweekly. 17th of August 2018 is going to be HUGE ? #crazyrichasiansmovie

The book: The Darkest Minds series by Alexandra Bracken

Bracken’s Darkest Minds series first came out in the height of the YA dystopian era, and it keeps that connection with its star. Hunger Games breakout Amandla Stenberg is Ruby, a girl who develops strange powers after surviving a mysterious plague that kills many of the children in America and is sent to a cruel “rehab” camp. Ruby, who as a survivor is seen as dangerous, escapes the camp and searches for others like her. Mandy Moore and Gwendoline Christie also star.

Joel Edgerton (Red Sparrow) gets behind the camera, producing, directing, and writing the screenplay for Boy Erased, which is based on Garrard Conley’s memoir. Lucas Hedges (Lady Bird) stars as a 19-year-old Conley, the son of a Baptist pastor, who is outed as gay to his parents (Nicole Kidman and Russell Crowe). He is pressured into a conversion camp, led by head therapist Victor Sykes (Edgerton). When the film was first announced, Conley wrote about the importance of queer representation, saying: “Representation matters, and when I was growing up closeted in Arkansas, it was a matter of life and death.”

The book: First Man: The Life of Neil Armstrong by James R. Hansen

Ryan Gosling reunites with his award-winning La La Land director Damien Chazelle for this biopic about the famous astronaut who was the first to walk on the moon. While the movie will focus on Neil Armstrong’s life between 1961 and 1969, it will, of course, feature others who were integral to the mission, including Corey Stoll as Buzz Aldrin; Kyle Chandler as Deke Slayton, NASA’s director of flight crew operations; and Claire Foy as Janet Shearon, Armstrong’s first wife.

The book: The Girl in the Spider’s Web by David Lagercrantz

Claire Foy takes off her royal shoes and steps into Lisbeth Salander’s gothic boots, taking over from Rooney Mara’s turn as the hardcore hacker in 2011’s The Girl with the Dragon Tattoo. Based on the fourth book in the bestselling Swedish Millennium series — the first written by Lagercrantz — the movie follows Lisbeth and journalist Mikael Blomkvist (Sverrir Gudnason) investigating cyber criminals and corrupt politicians. Foy is the third actress to portray Lisbeth Salander; Noomi Rapace also starred as the main character in a Swedish film trilogy based on the original novels in 2009.

Most of us are familiar with the supercalifragilisticexpialidocious original Mary Poppins film from 1964 starring the iconic Julie Andrews, but did you know it was based on P.L. Travers’ eight-book series? Mary Poppins Returns is a sequel to the 1964 film — that’s a 54-year gap between movies — with an all-new cast. Emily Blunt stars as the quintessential nanny, while Meryl Streep plays Mary’s cousin. Hamilton multi-talent Lin-Manuel Miranda also stars as an apprentice to Dick Van Dyke’s — who’s the only main star from the original confirmed to be returning for a cameo — previous character.

The book: The Hate U Give by Angie Thomas

Angie Thomas’s debut novel was also one of last year’s most talked about books. And it was actually making waves before its February 2017 release: plans for a movie adaptation were announced in March 2016. Amandla Stenberg is — the actor’s second YA-novel-turned-film role this year — Starr, a 16-year-old prep school student who has to deal with the aftermath of witnessing her unarmed friend get shot by a police officer. Regina Hall, Common, and Issa Rae also star. Thomas told MTV News that the Black Lives Matter movement inspired her, saying: “Seeing the energy of the movement honestly just gave me the confidence to even write this book.”

The book: Dumplin’ by Julie Murphy

Another YA hit rounds off our list. Dumplin’ follows Willowdean (Danielle Macdonald), who’s nicknamed “Dumplin” by her mother (Jennifer Aniston). Willowdean is a self-proclaimed fat girl who has always felt comfortable with her body. But when she meets the handsome Bo (Luke Benward), Willowdean realizes that she does struggle with insecurity. To prove everybody — and herself — wrong, she decides to enter a beauty pageant. Aniston is also a producer on the movie, while the queen of country, Dolly Parton — who Willowdean is obsessed with — is working on music for it.