10 Mindblowing Revelations We Learned from the Friends Reunion

Including which of the Friends actors almost had a relationship. 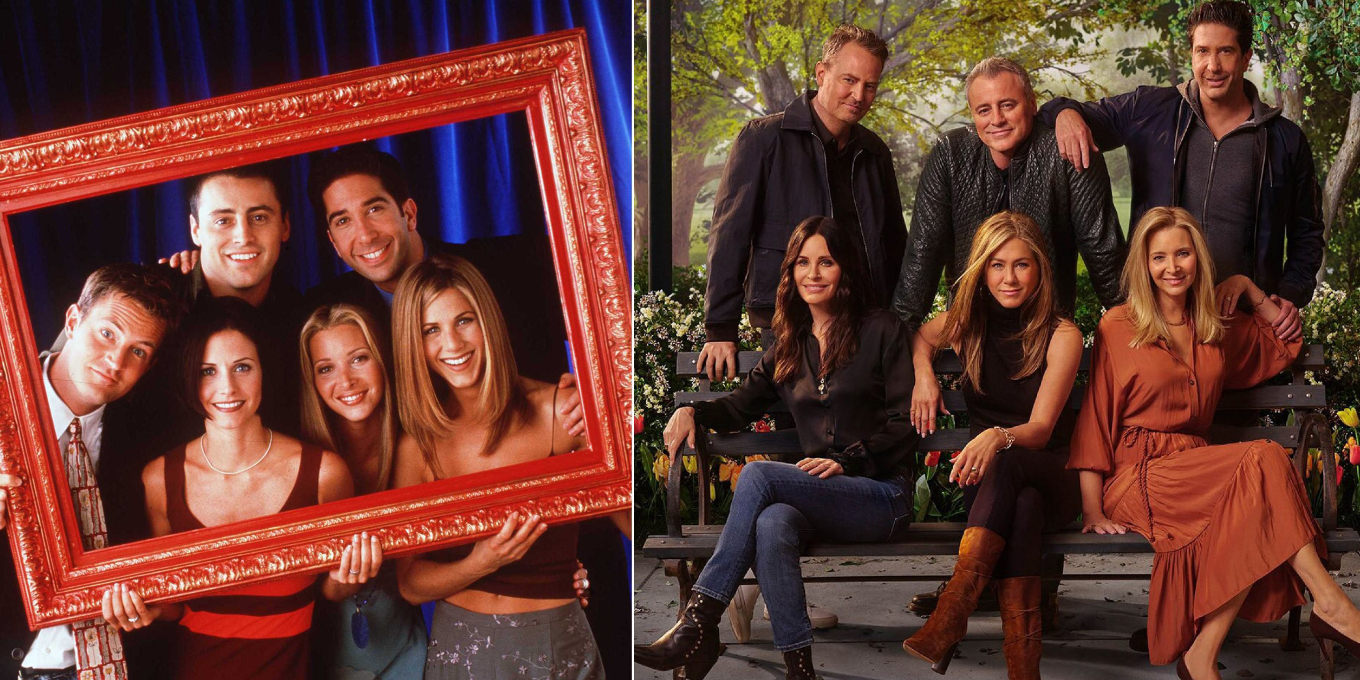 Warning: This article contains spoilers for the Friends reunion.

After 17 years of waiting, a Friends reunion has finally arrived on screens.

Airing on HBO Max and Crave on Thursday, May 27, the TV special features the cast reuniting on their iconic set at the Warner Bros studio in California (no, the show wasn’t shot in New York City).

With emotions running high, the cast and host James Corden revisited some of the actors’ best and most well-known episodes and reflected on the astronomical level of fame they experienced as the show became the biggest program on TV during the Nineties and Noughties.

All in all, if you’re a friends fan, our review is that it will be a lovely trip down memory lane. You’ll laugh, you’ll cry and you’ll want to watch all 10 seasons from start to finish. You’ll be forgiven for thinking you could do without the guest appearances though (you’ll see what we mean), but you will learn some facts that even the biggest Friends fan might not have known before…

1. Jennifer Aniston and David Schwimmer had a huge thing for each other in season one

Asked by Corden if any of the six cast members ever got together in real life, the actors said no, but Jennifer Aniston then revealed that it could have almost happened in the very first season.

Looking to David Schwimmer, the two then confessed that the actor was ‘crushing hard’ on Aniston early on, which Aniston confirmed was ‘reciprocated’ by her too.

‘At some point we were both crushing hard on each other, but it was like two ships passing because one of us was always in a relationship,’ Schwimmer explained. ‘We never crossed that boundary. We respected that.’

Fans will know that season one was when the long-running Ross and Rachel storyline began, with a recently divorced Ross vying for the attention of Rachel, who had just left her fiancé Barry at the altar.

Aniston and Schwimmer vowed to not breach their line of friendship and their first kiss was the one in Central Perk, which fans saw in the show after Ross chooses Rachel over Julie. 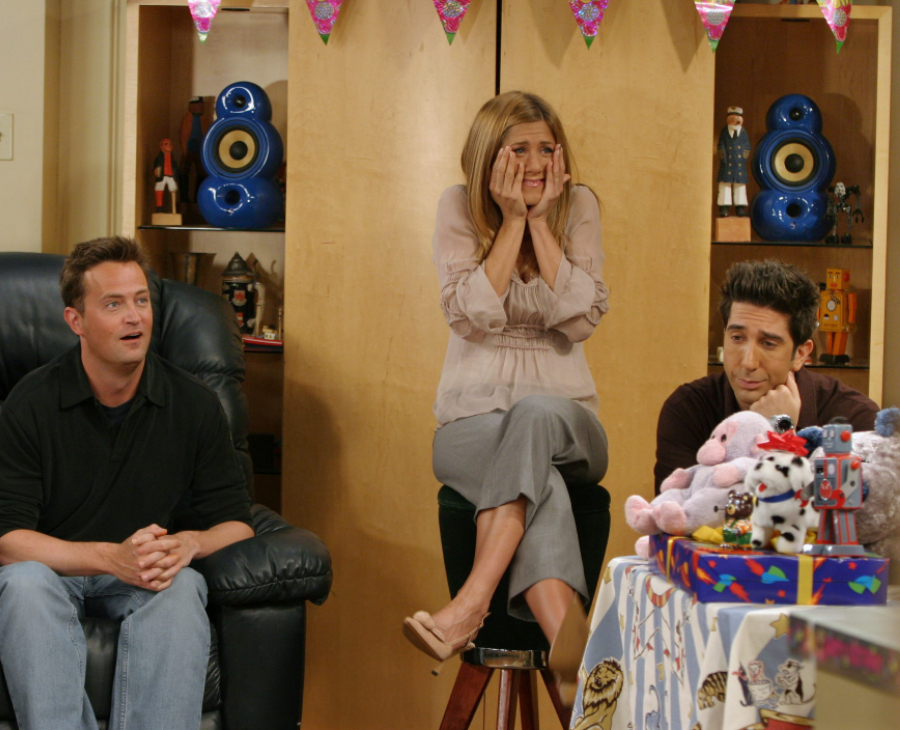 ‘I remember saying one time to David, “it’s going to be such a bummer if the first time you and I actually kiss is going to be on national television”. Sure enough, the first time we kissed was in that coffee shop. But we just channeled all of our adoration and love for each other into Ross and Rachel.’

Schwimmer later revealed, in conversation with his co-stars, how he was surprised the rest of the sextet didn’t cotton on to the growing crush in their inner circle, as they would regularly spend filming breaks ‘cuddling on the couch’.

‘We knew,’ Matthew Perry nodded before Cox and Kudrow joined in agreement.

Revisiting the set of Monica and Rachel’s apartment, Matt Le Blanc recalled how Cox would have her lines written on the table as a reminder while filming. Kudrow confirmed this saying Cox would sometimes have the script placed in the sink too.

Discussing the casting of the famous ensemble, creators Marta Kauffman and David Crane recalled how casting Phoebe Buffay was harder than they thought and how they saw many actresses vying to get the part of the singing masseuse. They were then alerted by a friend to Kudrow, who had been playing a waitress called Ursula in a sitcom called Mad About You.

As fans know, Kudrow didn’t only play Phoebe in Friends but also Phoebe’s (evil) twin sister, Ursula – who was indeed a waitress.

4. The actor who almost played Joey later appeared on the show

During the casting discussion Kauffman and Crane also revealed how the final round of audition for Joey Tribbiani came down to Matt Le Blanc and one other actor.

The other actor considered for the role was Louis Mandylor, who later appeared in the sixth season of the show playing Carl aka ‘Fake Joey’, who Joey enlists to pretend to be his identical twin for a science experiment and offered a hefty payment for participation in The One With The Unagi. 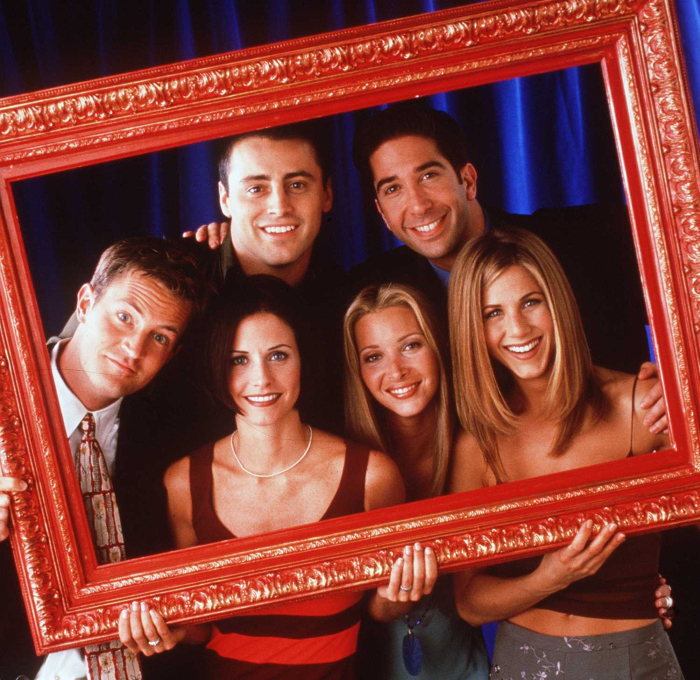 Asked by a lucky member of the audience during the actors’ interview with Corden the one thing they disliked about their time on the show, Schwimmer revealed that despite how it may have seemed he didn’t get on with Marcel the monkey at all.

Marcel was Ross’ pet monkey in the first season and according to Schwimmer, the professional acting monkey often delayed filming.

‘We’d have to reset again and again because the monkey didn’t get it right,’ Schwimmer – who maintained that he is an animal lover – explained, exasperated.

Another reason Marcel ended up in the actor’s bad books was because he would sit on Schwimmer’s shoulder and be fed live bugs and grubs by his trainer, which Marcel would then put in the actor’s hair…

When Joey and Chandler are fighting over the chair in The One Where No One Is Ready (you know the one we mean: “Could I be wearing any more clothes?”) a stunt by Le Blanc, where he ran into the chair to beat Perry’s character resulted in his arm falling out of the socket.

Filming was paused, Le Blanc was treated and when it resumed, they wrote in the sling Le Blanc had to wear (which in the show happened when Joey was jumping up and down on his bed).

7. Why Monica and Chandler ended up together

The show’s creators explained how they monitored the live studio audience’s reaction to jokes, storylines and plots. One reaction they didn’t anticipate being so strong was the aftermath of Monica and Chandler sleeping together at Ross’ wedding to Emily in London, which was met with an ongoing applause and cheers.

Crane explained how originally it was scripted for Monica and Chandler to hook up, be ‘awkward’ for a while and then stay friends, but the overwhelmingly positive reception to the hook up led them to reconsider and establish the former friends as a couple. 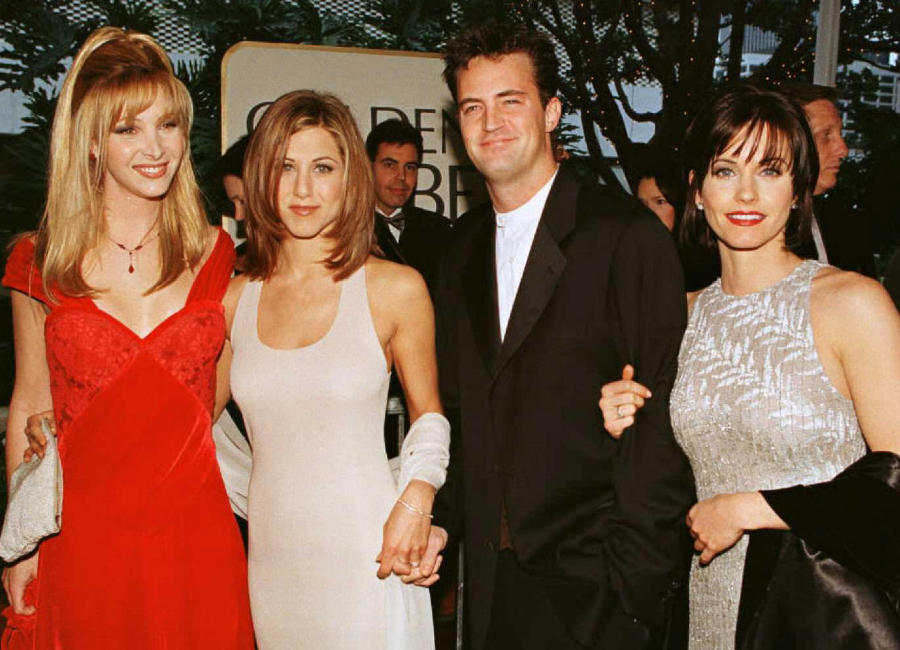 8. Who was last to be cast in Friends?

First to be cast in the show was Ross, who had been written with Schwimmer in mind. Kudrow, Le Blanc, Cox and Perry were cast next but the role the creators struggled with the most was Rachel. Observing that Rachel was ‘selfish and spoilt’, the writers knew that the actor in question had to bring a likeable and ‘endearing’ quality to the character so that the audience could identify why Ross was falling for her. Enter, Aniston, who was the only one to deliver to brief.

9. How the set-up of Monica’s apartment changed

Fans of the show might have noticed that over the 10 seasons, some of Monica and Joey’s apartment decor changed. In Monica’s apartment one big change was a wooden beam, which is visible in the early seasons of the show and then disappeared.

Observing the set on the reunion – which did feature the beam – Kudrow and Schwimmer explained that it kept getting in the way of the camera, hence its removal.

10. How Chandler got his name

Kauffman explained how the show was loosely modeled on her and Crane’s own experiences in New York City of their friendship group, who were all in their twenties trying to work and ‘falling in love’. One friend happened to be called Chandler, which was how Perry’s character got his unusual moniker.

How to Watch Friends: The Reunion as Soon as It Drops on HBO Max and Crave
The Friends Reunion: Everything We Know About the Long-Awaited HBO Max Special
Barry Jenkins and the Cast of The Underground Railroad Discuss the Must-See New Series