In honour of the first day of TIFF, we’re taking a look at some of the women-directed films screening at this year’s festival that should be on your radar. 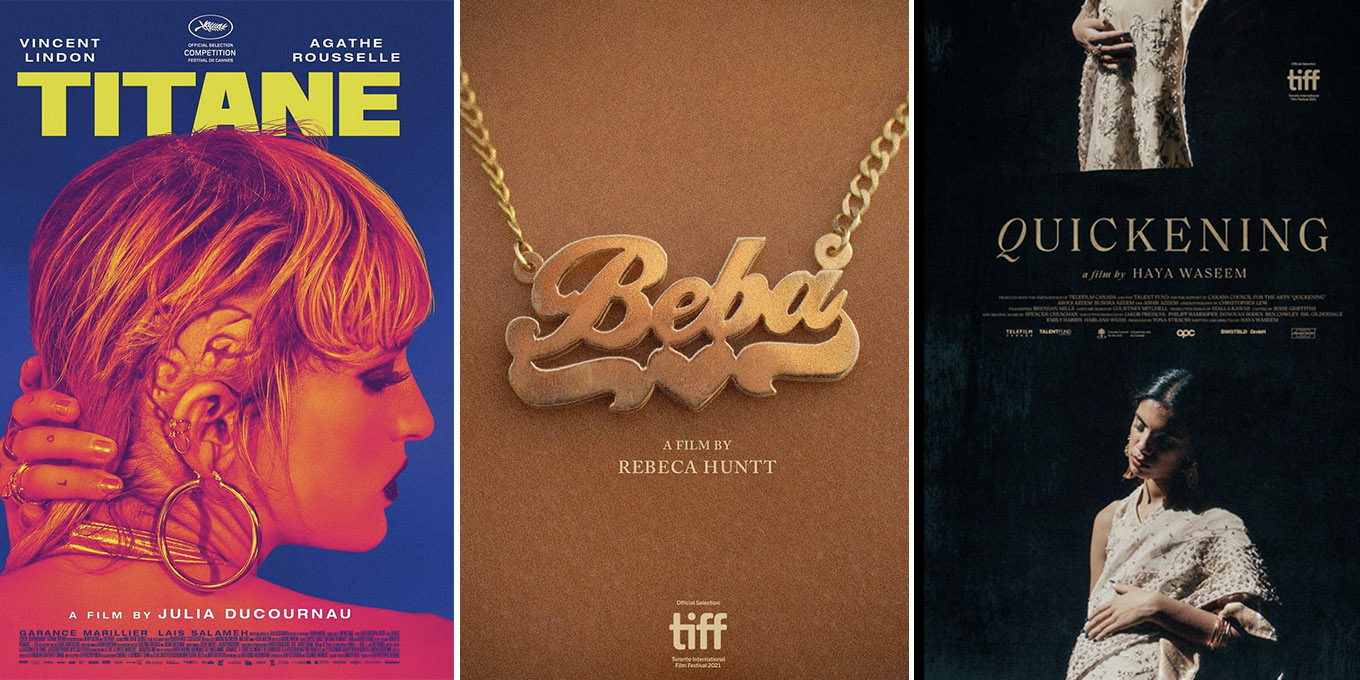 It’s the most wonderful time of the year for Canadian film lovers. Running from September 9 to 18, the Toronto International Film Festival is holding a hybrid model for 2021, with both virtual and in-person screening options. There are a ton of buzzy movies to check out, but these 10 women-directed films are a great way to kickoff one of the world’s biggest film fests.

For her latest film, Ali & Ava, critically acclaimed British writer-director Clio Barnard (Dark River) puts a fresh spin on a classic concept: Two people from very different worlds with very different backgrounds and interests meet and forearm a deep, undeniable bond. In the case of this romantic drama, it’s the titular Ali–a British-Pakistani man who works as a landlord and is facing marriage troubles–and Ava–an Irish born teacher who is a single mother with five children. Inspired by people she’s met IRL, by all accounts Barnard has made a tender, profound movie that reminds us of the power of human connection.

Beba is not quite like anything else screening at this year’s fest. The documentary is the feature-length debut from filmmaker Rebeca “Beba” Huntt, and she’s turned the lens on herself for the movie. Eight years in the making, the autobiographical doc depicts a nuanced, candid self-portrait of Huntt, an Afro-Latina New Yorker who always carries the ancestry of her immigrant parents–her mother is originally from Venezuela and her father is Dominican–with her. It’s Huntt’s story, but it’s also about historical, societal and generational trauma and how it has shaped her life and family.

Black Mirror gets a hint of romance in German director Maria Schrader’s I’m Your Man (or Ich bin dein Mensch in it’s original language). The sci-fi romcom follows Alma (Maren Eggert), a skeptical scientist who, in order to secure funding for her research, must live with and evaluate a humanoid cyborg (Downton Abbey’s Dan Stevens) whose sole purpose is to make her happy. But can a robot be the perfect life partner–and can Alma actually feel love for it in the way it supposedly does for her?

Danis Goulet’s Night Raiders is easily one of the most anticipated films at TIFF 2021. But be warned: the Cree-Métis filmmaker’s movie does depict triggering content that can be difficult to watch, especially for certain viewers who have experienced abuse, violence and intergenerational trauma inflicted by colonialism. The genre thriller is set in the near future in war-torn North America, and follows Niska (Ella-Máijá Tailfeathers), a Cree mother who joins a vigilante group after the military government takes her daughter from her and forces her into a state-backed education camp. Get ready for powerful performances, stunning filmmaking and a movie that will stay with you long after the credits roll.

For her debut feature-length film, Pakistani-Canadian writer-director Haya Waseem is examining the pressures and expectations young women of colour living in North America constantly have to confront–especially when it comes to love, family and mental health. Quickening follows Sheila (rising star Arooj Azeem), a Pakistani-Canadian teen who has fallen in love for the first time and is seeking her own freedom while wrapping up her first year of university. Not long after she has sex with her boyfriend for the first time, he suddenly breaks up with her and she begins to lose her sense of reality while becoming alienated from her friends, family and community.

Toronto-based filmmakers Shasha Nakhai and Rich Williamson teamed up for their feature debut, a raw adaptation of Catherine Hernandez’s critically acclaimed novel Scarborough. The film takes its name from the book, and unravels over the course of a single school year while interweaving the stories of three low-income families battling against debt, addiction and job insecurity. At the heart of this moving film are three young children who attend the same morning school program: Laura, who is neglected by her parents; Bing, a Filipino boy living with an abusive father who is also struggling with mental illness; and Sylvie, an Indigenous girl whose family is denied permanent housing.

When Keira Knightley is in a movie, you watch it. In Camille Griffin’s British black comedy, Silent Night, Knightley stars as Nell, a woman who’s preparing to welcome friends and family into her home for a painstakingly-planned perfect Christmas gathering. Perfection proves to be impossible, however, when a toxic cloud forms over the U.K., threatening to kill, well…everyone. Lily-Rose Depp (The King), Matthew Goode (Downton Abbey), Kirby Howell-Baptiste (The Good Place) and Annabelle Wallis (Peaky Blinders) also star.

The Power of the Dog (Jane Campion)

When Jane Campion–a.k.a. the first-ever woman filmmaker to win the prestigious Palme d’Or prize at the Cannes Film Festival for her 1993 period drama The Piano–makes a new movie, people pay attention. The fact that The Power of the Dog, which is adapted from the Thomas Savage novel of the same name, is her first movie since 2009’s Bright Star makes it all the more buzz-worthy. Benedict Cumberbatch stars as Phil, a rancher living in 1920s Montana who becomes determined to torment his brother’s new wife, a widow named Rose (Kirsten Dunst), and her son as they try to fit into their family dynamic.

Parisian filmmaker Julia Ducournau’s Titane made headlines when it debuted at Cannes earlier this year for a few reasons. The first? The body horror thriller–about a woman who is left with long-lasting repercussions after being involved in a violent vehicle accident as a child–somehow, involves a scene in which a woman has sex with a car. (Yes, really.) But more importantly? The movie won this year’s Palme d’Or prize, making Ducournau only the second woman to win the honour in Cannes Film Festival’s history. We’ll cheers to that.

Haida filmmaker Heather Hatch spent five years chronicling protests and legal challenges against British Columbia’s Site C–a controversial hydro dam project–to make her latest documentary, Wochiigii Lo: End of Peace. The hydro-electric project crosses the Peace River (the world’s 13th longest river system) in an area that’s mostly inhabited by Indigenous people. Among that population are the West Moberly and Prophet River First Nations, both bands that are covered under the province’s historic Treaty 8 agreement. This crucial, eye-opening doc takes viewers behind the scenes of their fight while introducing you to some of the key leaders, and serves as a stark reminder of the environmental, social and human costs of the dam.

Everyone Is Waiting for Kristen Stewart’s Diana in the New Spencer Teaser
The Mindy Kaling Cinematic Universe Is Ever-Expanding
In the Heights Star Melissa Berrera on Landing the Part, the Latinx Community and the Timing of This Release