Metric: The new darling of the alt-pop scene

Emily Haine's life is beyond busy. She fronts the pop band Metric, collaborates with Broken Social Scene and is ready to release her solo album. Is there anything this singer can't do? 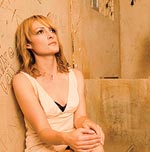 Many people would find the pace of Emily Haines’s life a little hectic. Metric, the raucous pop band she fronts with riveting, manic energy, has been on the road almost constantly these days. Along with performing a couple of high-profile gigs, like opening for The Rolling Stones in New York, Metric has been promoting its second full-length album, the Juno-nominated Live It Out (Last Gang Records/Universal).

As well, when her schedule permits, Haines writes and performs with Broken Social Scene, the Toronto collective that kick-started a wave of recent Canadian indie-music success stories. And the 30-year-old musician has managed to record a solo album, due out in September. “I guess there’s a lot going on, but once you get momentum, it isn’t really that taxing,” Haines explains during a tour stop in Vancouver. “It’s what I’ve always done — what all of us have done. We just want to make stuff.”

Haines has been working on her solo album on and off for four years. “I won’t say it’s finished until the day it comes out,” she says, laughing. Like all her songs, the new ones started life on her piano. Rather than collaborating with Metric’s James Shaw, her long-time musical and former romantic partner, Haines worked on the songs with new buddies, like Sparklehorse multi-instrumentalist Scott Minor. “I wanted it to be like a sparse Neil Young record, but Scott added some amazing Mellotron and drums and other flavourful bits. I don’t know what to say about the sound except that it’s cinematic. It feels like a soundtrack to a movie that hasn’t been written — or maybe it has been written but no one has sent me the script.” In keeping with this cinematic feel, Haines will perform the new songs during the Toronto International Film Festival in September. There will be a few more solo shows but “nothing too rigorous” since Metric will be reassembling to write its next album. “I’m happy to have an outlet for songs that might never have been released because they weren’t suitable for Metric,” says Haines. “And it makes me love Metric even more because I no longer feel like it’s my only thing.”