Kiss away the frost and float into spring with this month’s musical recommendations. 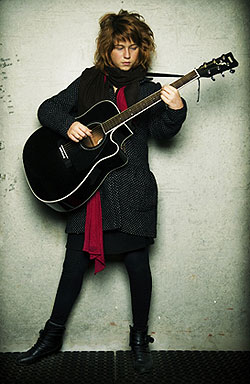 I don’t normally write about EP’s, especially ones that came out in 2008. Ellecanada.com’s monthly music recommendations are meant to introduce to something new but I have to put my ego aside for a moment and just remember that good music is good music, no matter what. I’m no indie hipster music snob and as such, it is my duty to introduce you to Selah Sue, even if I am 2 years behind the curve. This Belgium-born cutie has yet to release a full-length album but her EP is strong enough to illicit great expectations. Ok, enough smoke up her lederhosen (some Belgians do wear them!) let’s get down to why she makes this month’s music list. We all know music has no race, colour or religion, but you have to admit that a white girl from Belgium successfully pulling off a pop-reggae hybrid sound is pretty impressive. All 5 songs that make up the EP are incredibly listenable, catchy and a teaser from a girl who has tremendous talent and a unique ability to make what should be unnatural sound perfect. As soon as I find out, I’ll let you know when she puts out a full-length album but in the meantime, check out her MySpace page and listen especially to “Ragamuffin” and “Fyah Fyah”. Moby joins her in a few of the featured videos including a trés cool cover of Lou Reeds “Take a Walk on The Wild Side”. You heard it here first.

With a name like Jason Dragonetti (the male half of LA-based group The Submarines) he was either bound to become a rock star, or maybe a Formula One race car driver. Lucky for us, he chose the former. Real-life married couple Jason Dragonetti and Blake Hazard aren’t completely under the radar; you might recognize the single “You Me and the Bourgeoisie” from one of the latest iPhone commercials which is bound to launch this sweet twosome into the great land of musical worship. Most songs are dedicated to love or loss thereof, but
Honeysuckle Weeks is not over-the-top emotional overload. Whether it’s their recent marriage, sunny California or just rainbows and lollipops, The Submarines have created an album full of hugs and kisses. Cheesy? You betcha. Worth picking up? Absolutely.

My top picks: “Submarine Symphonika”, “Xavia” and of course “You and Me and The Bourgeoisie,” but let me know what you think. Have a listen and email me at
[email protected].

More new music on the next page …

Music couple Jace Lasek and Olga Goreas are well known in Canadian indie circles (they were nominated for a 2007 Polaris Prize for their album, T
he Besnard Lakes are The Dark Horse) and their meteoric rise in fame shows no signs of stopping. The band continues to reign triumphant with 10 solid tracks, ranging from sunny to spooky, but in the best possible way. The first single “Albatross” and “Chicago Train” suck you in while “Glass Printer” keeps you there. Fuzzy guitars, Beach Boy-esque harmonies and the custom 1969 Neve mixing board (once used by Led Zepplin on Physical Graffiti) make this album the duo’s best to date.