He's just not that into you. Or is he? Break into the minds of men and find out whether they're really thinking about you or Playstation 3. 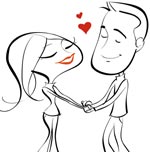 Most times the conversion between male and female-speak can be more difficult to interpret than The Da Vinci Code. He’s “just tired”, you “have a headache”, he asks if you’re “really alright”, you reply “Yes, I’m fine.” What does that really mean anyway?

ELLE online is here to help. We close the gap on 4 of the most common miscommunications between the battle of the sexes. Jacqueline Parker, an ELLE reader, and her male partner weigh in ….

Myth #1 Why is that men don’t call when they ask for your number?

HIM: Have you seen these new cell phones? It takes an engineering student to make them work.

HER: Yet you can figure out how to re-wire a stereo for surround-sound. Don’t dodge the question.

HIM: There’s no one answer, but “guys can be jerks” is a start. Maybe they lost interest; sometimes they’ve met someone they liked more right after they met you, maybe they’re working on writing a phone book.

Myth #2 Why can’t you ever tell us what’s on your mind when we ask?

HIM: We DO say what’s on our minds, you’re just looking for deeper meaning in an honest and straight forward response. It’s just usually not emotionally based. We talk all the time about how our sports teams are suffering, about the release date for Playstation 3, about anything that comes in to our heads.

HER: So then a guy will let you know when he’s upset?

HIM: In this article?

HER: Funny. In the women they pursue? Is it the chase?

HIM: Sometimes we forget what drew you to us in the first place, because you become regular and normal to us. You’re not that exotic woman we met at a bar, you’re the girl I saw floss her teeth in the bathroom this morning. Or maybe you just don’t get that excited about Playstation 3, it’s hard to say. When she’s the right girl though – we don’t lose interest – we gain it. And suddenly that dental floss is pretty sexy.

Myth #4 Is weight a deterrent in a relationship?

HIM: Well, I have to be honest. If my girlfriend gains “noticeable” weight, I’m not talking Kirstie Alley here, but more than she maybe should, I’ll notice and I will admit I become less sexually attracted to her. I would think she would feel the same way about me if I grew out a bit. If I have to hit the gym five times a week just to try and look like Vince Vaughn circa Swingers, she should be paying attention to herself as well.

What do you think? Are we on to something here or just adding fuel to the fire? Discuss in our forums!