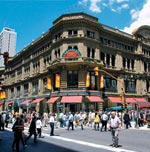 Where
Located in central Argentina on the southern bank of the Plate River, the country’s capital boasts designer shopping and non-stop nightlife.

Your guide
Jessica Trosman, 38, is one of Argentina’s most recognized fashion designers. A cross between Ann Demeulemeester and Jil Sander, her avant-garde designs are sold internationally through Harvey Nichols in London, Onward in Paris and Dernier Cri in New York, as well as through London-based Internet retailer www.Net-A-Porter.com

The vibe
Much of the city’s architecture and culture hearkens back to Buenos Aires’ heyday at the turn of the 20th century, when it received its greatest influx of European immigrants. Parisian facades and beaux arts cafés are a picturesque backdrop for the style-conscious porteñas (as B.A. locals are called, in reference to the city’s ports).

Big picture
Start your day at La Biela in the chi-chi Recoleta neighbourhood, people-watching as you sip your café con leche under the shade of the great ombú tree. “Recoleta is one of the most beautiful places in the world,” says Trosman. “With its mix of architectural styles, tourists don’t know if they’re in Paris, Madrid or Rome.” Follow up with a quiet stroll through the sublime mausoleums of the Recoleta cemetery, looking for Eva “Evita” Perón’s resting place (ask for the Duarte family tomb). Window shop along Avenida Alvear and neighbouring streets, where you’ll find haute brands like Louis Vuitton, Kenzo and Cartier. Later, take in an asado (barbecue) and some local Malbec wine in the city’s newly revamped Puerto Madero waterfront, home to warehouse boutiques, high-end restaurants and the popular Opera Bay nightclub (don’t miss their after-work schmooze fest on Wednesdays).

Local style
Besides shag haircuts, porteñas love their Rapsodia jeans, Maria Vazquez lingerie tops and Jazmin Chebar cropped blazers, so expect to see plenty of these on offer. “The porteña likes to show off her physique,” reveals Trosman. “She’s in touch with her body and likes to look sexy.” Weekly pedicures and hair appointments aren’t a treat; they’re a way of life, with salons on almost every city block. Though there’s no shortage of gyms and pilates and yoga studios, the active porteña prefers biking, walking and running through the various parks and tree-lined avenues. When all else fails, Argentine women turn to South America’s favourite little helper: cosmetic surgery — and with the low peso, even tourists are booking themselves a bit of nip and tuck during their stay.

Why you should go
Since the Argentine peso’s devaluation in 2002, visitors can snap up designer wares and enjoy the city’s luxe hotels and posh restaurants for a fraction of the cost they’d pay in other cosmopolitan cities like Milan, New York and London.

What to take
Extra luggage! You’ll reel at the abundance of affordable, high-quality, beautifully tailored and ultra-feminine clothes, shoes and accessories from gorgeous malls like Patio Bullrich and Galerías Pacífico to Palermo’s fashionable shops and the many fairs held throughout the week.

Jessica’s best list…
Hotels
Built in 1932, the Alvear Palace Hotel remains the city’s most prestigious hotel. With its sumptuous rooms, Hermès bathroom goodies and 24-hour butler service, the Alvear has played host to social heavyweights Prince Charles, Carolina Herrera and Oscar de la Renta. “You can sense the aristocracy at the Alvear — it’s truly glamorous,” says Trosman. But style pundits like Trosman flock to the new Faena Hotel for poolside bellinis. The brainchild of French designer Philippe Starck and local businessman Alan Faena, this flamboyant boutique hotel, with its themed rooms and cabaret spirit, is where you can indulge in a traditional Turkish bath and La Prairie facial.

Photography of Galerías Pacifico, one of Buenos Aires National Historical Monuments, courtesy of Catalina MargulisShopping
Head to Plaza Serrano (also known as Plaza Cortazar) in the Palermo district to explore its jewel box boutiques, where designers like Trosman, Cora Groppo and Maria Cher showcase their designs. Artisanal stands are set up in Recoleta’s Plaza Francia all week long, but it’s best to see them in all their weekend glory. You’ll find everything from handmade silver and leather goods to art and home accessories. On Sundays, visit the antique stores and Plaza Dorrego flea market in San Telmo. “Here you’ll find jewellery, clothes and furniture from the ’30s on,” says Trosman.

Hangout
Argentina is world-famous for its beef, but the city’s trendier spots follow the culinary fusion trend. Palermo is packed with chic bars and restaurants like ølsen, which offers Scandinavian-Argentine delicacies on its sun-drenched garden deck. But if it’s chorizo and sweetbread that you’re after, head to the more residential Las Cañitas neighbourhood, where Campobravo offers authentic Argentine parrillada (mixed grilled meats) and is a top spot for catching the Báez strip’s humming nightlife. Keep in mind that most restaurants don’t fill up for dinner until 10 p.m., and bars get hopping starting at 2 a.m. (the typical night out involves stopping for breakfast on your way home). Las Cholas, on nearby Arce, may be your only chance to try maté, a local infusion, at a special afternoon sitting.

Tango
Walk around the colourful working-class neighbourhood of La Boca, tracing the history of the tango. “I’m from Boca,” says Trosman. “It’s very Italian. This is where the first Genoese immigrants arrived.” Browse the paintings and souvenirs for sale along El Caminito and catch a live tango performance. For an all-out tango experience, take in dinner and a show at the elegant Esquina Carlos Gardel and swoon to the bandoneón accordion. If you want to join in on the fun, be sure to visit the historic Confitería Ideal, where scenes were filmed for Evita, starring Madonna. Classes and dances are offered above the downstairs café. “Be sure to try the pastelerías [pastries],” advises Trosman. “They’re to die for!”

Air Canada flies direct between Toronto and Buenos Aires, as well as via Santiago, Chile, for a combined total of six times a week (www.aircanada.com).