From first impressions to first kisses to first fights, four star couples reveal all in the ELLE love quiz. 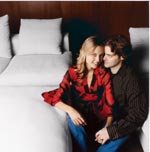 LIISA WINKLER AND RYAN BOORNE
She’s an international model. He’s a principal dancer with The National Ballet of Canada. When this power couple married last summer, it marked the beginning of a new chapter in their love story. “I decided to take some time off,”explains the 26-year-old Winkler during a photo shoot at Toronto’s Hotel Le Germain. “I had been doing shows for the past nine years. It was crazy.” For Boorne, juggling their hectic schedules was tiring. “After six years of living half a year apart, it was getting to us. Now it’s great — we’re actually hanging out in the same town.”Do these newlyweds agree on other matters of love?

SHE SAYS …
First impressions “When I first met Ryan, I was 10 and he was dating my babysitter! I wasn’t interested then, obviously. Even when we met later, we didn’t really hit it off immediately. We were attracted to each other, but he was a little intimidating.”
First kiss “It was on an escalator going down to the subway. Maybe it was a 7 out of 10. But, wait, all first kisses are very good, so I’d make it an 8.”
First fight “Wow, I can’t remember. We don’t fight often, but when we do, I win because I’m right!”
His most lovable trait “It’s his sweetness. He’s such a kind person. Physically, it’s his nice, big, kissable lips.”
His least lovable trait “Smoking.”
Being in love means … “So many things. I guess it’s wanting to be with someone for the rest of your life.”
Being apart “When I’m away from Ryan, I miss talking to him about my day. I miss his kindness.”
Marriage perks “Feels like we’re more of a family. We didn’t think it would be different ’cause we’ve been together six years; somehow you feel more together.”
Up next “When I was doing the Gucci stuff, I was leading the life I imagined most models did. I was working non-stop, travelling the world. People were flying me to parties. It was wild. Now I’m ready to try something else. Buy a house, start a family. Just basic stuff.”

HE SAYS …
First impressions “We met when I was 15 and she was around 10. We were both attending the Belleville ballet school. I just remember she was this cute kid with a ponytail. Six years ago, some friends set us up on a date. My impression that time was definitely different!”
First kiss “If I had to rate the first kiss from 1 to 10, I’d have to say 10. We’re married now, so if I said anything less I’d be in trouble.”
First fight “I don’t remember. Honest. I can’t even remember our last fight.”
Her most lovable trait “It’s her extreme goofiness. She’s always up to something.”
Her least lovable trait “Extreme goofiness.”
Being in love means … “I’m not sure I’m in love with Liisa. I just love her and know that I always will.”
Being apart “When Liisa is away, I turn into bachelor man, which means I spend way too much time in the pub.”
Marriage perks “I didn’t think it would feel different, but it does. How much it has changed is the most exciting thing. More solid. I didn’t think it could happen.”
Up next “After dance? It scares the crap out of me to stop. I’m thinking of going into psychology. I’d like to be a therapist for dancers. But first, we really want to travel. I’ve been working since I was 17, so I’d love to take off to Greece for a year.”

First kiss
Her: “We met in high school, but we didn’t begin dating until seven years later. It was a long wait, but worth every second for a kiss like that.”

Marriage lessons
Him: “After six years of marriage, we’ve noticed how uncool we actually look most mornings and how surprisingly cool we are with that.”

Romantic gifts
Him: “Cindy gave me a beautiful, leather-bound journal, and inside was the inscription ‘You’re going to be a daddy.’ I haven’t been able to top that one.”

Love tunes
Him: “Now that we have a child, we sneak off to the laundry room and make out to songs from The Jungle Book.”

Love tunes
Both: “Coldplay, for sure!”

First kiss
Him: “A 10 out of 10. Intense and passionate.”
Her: “A 10 because it had been so long since I’d kissed anyone — just kidding!I was so nervous, but excited. I felt like I was in junior high again awaiting my first kiss. I remember how incredibly soft his lips were.”

Kudos
Him: “I’ve seen how much Tara’s friends respect her, and that says a lot.”
Her: “I can’t believe how patient he is. Even when bad things happen, he remains calm.”

Biggest surprise after they got married
Him: “That she’s so in love with children — ’cause originally she hated them.”
Her: “That he’s even capable of being serious.”

Most unromantic gift exchange
Him: “I got her an umbrella and stockings!”
Her: “I got him bath towels.”

Favourite romantic outing
Both: “We renewed our wedding vows and had a storybook wedding in Santa Barbara.”