How Jenna Talackova turned her disqualification from the Miss Universe pageant into a successful career. 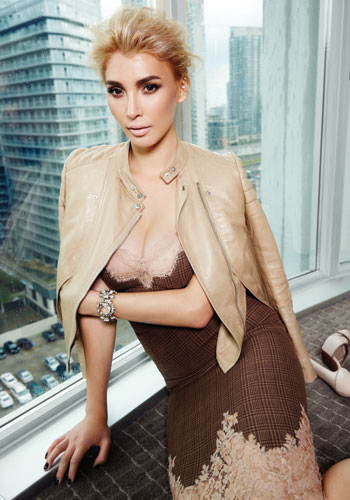 Most Miss Universe contestants fight to stand alone in the spotlight. But in 2012, Jenna Talackova landed centre stage without ever winning a crown. The Miss Universe Organization disqualified the now 25-year-old contestant because she was born a male, despite the fact that she’d had gender-reassignment surgery at 19 and now identifies as a woman.

CANADIAN MODELS on the most beautiful things in life

Talackova’s fight with the organization caught worldwide attention. In just a year, she has successfully lobbied to change the Miss Universe eligibility rules, become an advocate for transgender rights and signed on for a reality-TV show—aptly titled Brave New Girls—that premieres on January 19 on E! Canada.

Today, the leggy six-foot-one blonde sidesteps the camera crew who are capturing her every move as she pursues acting and modelling in Toronto and sits down on a plush couch to chat. And it’s easy to see why she will likely achieve success: She exudes pure confidence.

“I believe I am a woman who went through transgender procedures,” says Talackova after a long day of filming. “As soon as I started taking hormones, I felt more and more complete. How everything worked out is amazing.” The beauty-pageant regular has always found solace in fashion. Talackova remembers going to Holt Renfrew with her mother in her hometown of Vancouver when she was a child and being mesmerized by her mom’s beauty routine. “Now I’m into Japanese and Korean fashion—Harajuku Barbie mixed with preppy housewife,” she says with a laugh.

Whether or not she realizes her dream of recording a K-pop song or starring in an action movie, Talackova will always be a beacon for those who struggle with figuring out who they really are. “You know, you need to be real with yourself, and you need to realize that it’s not a mistake,” she says. “You have an amazing life to live—live it the way you want to.”

Read more:
Meet the top Canadian models for 2013
Is our obsession with celebrity gossip unhealthy?
ELLE World: Georgette Gagnon, the voice of the voiceless
The new top models: Ones to watch in 2013