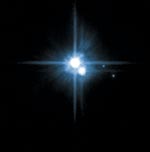 When the International Astronomical Union recently denied Pluto its status as a planet, my response was, “Don’t mess with Pluto!” So what if it is too small for one of its moons, doesn’t dominate the neighbourhood, has an untidy orbit and has to be round? (Hey, how round is round?) I say, “Be there or be square!”

Pluto, the planetary ruler of Scorpio, lords over nations and genocide. It is both creator and destroyer. And now it’s a dwarf? I don’t think so!

Pluto is the other name for the Greek god Hades, the ruler of the underworld. That’s why Pluto presides over all things secretive and hidden. It rules both organized crime and the police (because they play in the same sandbox).

Pluto rules everything to do with plumbing: sewers are buried under the streets, and plumbing is hidden behind the walls. Pluto is so secretive, we dare not name what it rules — we use euphemisms like “I’ve got to see a man about a dog,” “I have to powder my nose” and “I’ve got to spend a penny” instead.

Pluto rules jewellery and gems because they are hidden deep within the earth. Thieves steal them and the police protect them, and they are kept under lock and key in vaults and safes. (Pluto rules locks and security systems as well.)

Because Pluto rules everything hidden, it governs all things carnal: flesh and blood. Hey, we look deceptively simple because we’re covered by skin, fur, feathers or scales, but underneath all of that are the secrets of life: organs, blood and guts. To Pluto, butchers, taxidermists, morticians and surgeons all have the same job: they pick up a knife and slice open flesh — one looks for a pork chop, while another looks for a gallstone.

Page 1 of 2Pluto also rules the subtler aspects of the body — the subconscious — and so it governs psychology, psychotherapy and psychiatry.

The biggest secret of all is death, of course, and Pluto rules graveyards, tombs, cemeteries, morgues, mortuaries and everything else related to death and dying.

Pluto rules structures that break down in order to be rebuilt again — the planet is all about regeneration. When Pluto aligns with a planet or another significant part of your astrological chart, it signifies a source of great change and transformation. We generally think of Pluto as scary and destructive — and it is! But, in fact, it always wants a superior result. That’s why Pluto rules refinishing, recovering, restoring, renovating, refitting and restructuring.

For me, anyway, Pluto is alive and well, living in the cosmos and still doing its thing. You can relax, dear Scorpio. Pluto functions by removing decay (it also rules garbage) and that which is outmoded or no longer necessary. It removes those things that are no longer relevant to your life.

Personally, I know that Pluto signifies big change. When Pluto hit my Ascendant and opposed my House of Marriage, I got a divorce — I lost 185 pounds that I no longer needed around the house.