Liane Balaban is a master at playing quirky and complicated characters. 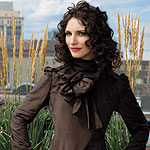 When Michael McGowan’s new film One Week was announced as a Gala for the Toronto International Film Festival, several critics in the room murmured that its storyline-a young man named Ben (Joshua Jackson) embarks on a transcontinental journey of self-discovery-seemed faintly reminiscent of Sean Penn’s Oscar-nominated drama Into the Wild. There are worse films to be compared to-nobody wants their movie to be whispered about as “this year’s I Know Who Killed Me” – but one of the film’s stars has a problem with that connection.

“For me, Into the Wild was about a foolish forsaking of opportunity,” says Liane Balaban, who plays Ben’s fiancée, Samantha. “I had trouble empathizing with a character who saw his privilege as a burden. In One Week, the protagonist has done the ‘sensible’ things in life-college, getting engaged, having a career-but still feels that something is missing. The film is about his search for something deeper-his true self. Anyone who feels that they’ve settled and wonders ‘What if’ will identify with him.”

As for her own role, Balaban credits McGowan with providing her with the vivid details that brought her character to life. “There was a ‘what I love and hate about Samantha’ montage in the script that revealed all of her idiosyncrasies: She has eclectic taste in music and a beautiful hip bone and makes an annoying jaw clack while eating.”

Idiosyncrasy is probably Balaban’s specialty: At 28, the Toronto-born actress is already a dab hand at inhabiting complicated characters. Most critics cite her performance in New Waterford Girl, but she was also terrific as a con artist in Seven Times Lucky and completely charming in her long-time collaborator Simon Ennis’ Heritage Minute From Hell short, The Canadian Shield. Balaban says that she’s excited about her role in Ennis’ upcoming feature debut, You Might as Well Live, and her lead role in the CBC pilot Abroad. “It’s about a journalist from Toronto who goes to work at a paper in London, England. In a nutshell, it’s about a girl trying to fit in overseas – or, more succinctly, it’s about a broad abroad.”

Learn how to look like a star at TIFF for less!