ELLE Canada sits down with one of the members of multi-national singing sensation, Il Divo. 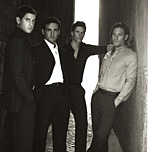 “You’re sexy.” says the oh-so-charming Carlos Marin, Spanish heartthrob from multi-national pop group, Il Divo. Marin, along with three others (Sebastien Izambard from France, Urs Buhler from Switzerland and David Miller from the U.S.) make up a quartet that is gaining worldwide popularity with their mix of operatic and pop music. On a promotional tour supporting their first CD, entitled Il Divo (2003), Marin sat down with me to discuss fame, music and most importantly, the art of romance.

Q: How did the whole concept of Il Divo first begin?

M: In my case, I was doing opera in Dublin, Ireland and my manager approached me about sending my videotape to a record label, Sony BMG as they were potentially scouting out solo singers. I had no idea that I would be auditioning for a group. After my audition, Sony asked if I’d be interested in becoming part of a 4-piece quartet. I wasn’t. I was (and am) an opera singer, so this didn’t really interest me. A few days afterwards, I got a call and Simon Cowell wanted to meet with me. At the time I had no idea who this Simon Cowell was, he was absolutely unknown to me.

Q:So Simon Cowell was the one to ‘recruit’ you to become part of Il Divo?

M: Yes, it was Simon’s idea from the beginning. In 2001, Simon was watching one of the concerts from the Three Tenors (José Carreras, Plácido Domingo, and Luciano Pavarotti) and he began to think about creating a group of young men with formally trained voices who would mix classical music with popular songs, old and new. He didn’t convince me right away — I was doing opera and before that, musical theatre. It’s very difficult to move from this to pop music. My opera director’s kept telling me, “Carlos, you’re crazy, you’re going to ruin your opera career.” But I went for it anyhow. I suspended all of my opera engagements until 2008 to pursue this. It was a very big risk at the time as I didn’t know where this would take me.

Q: But now your album, Il Divo, is listed as #1 in Canada and the U.K., along with being #4 in the Billboard Charts in the U.S. What do you attribute your quick rise to fame to?

M: We bring something different to the table, I think. We have a very unique sound. Classical arias are mixed with popular, catchy music and there really isn’t anything quite like it out there right now. All four of us are from different countries, I’m from Spain, Urs from Switzerland, Sebastian from France and David from the U.S. It’s so magical because it’s such a mix of different cultures and that really resonates in our music. On our CD, we have songs with lyrics in Spanish, French, Italian and English.

Q: So your opera directors must be biting their words now.

M: (Laughs). Maybe. What’s really unbelievable is how people are reacting to our music. When we finished the album, we were all a bit scared and unsure of how it was going to be received. We genuinely believed that selling 100,000 copies of our CD would be the ultimate success. When we went to #1 on the U.K charts after our first week, our record company called us and told us that we knocked out Robbie Williams and we thought, “Oh my god, this is amazing.” It was a shock. Now, to-date, we’ve sold over 3 million copies!
Q: Do you have a favourite song on the album?

M: “Unbreak my Heart” (by Toni Braxton) is a song that really came together for us and brought us closer as a group. Simon decided that we should do an operatic spin on this song and we recorded and re-recorded the track — fives times in total — to see how we could combine all of our harmonies together for one smooth sound. We had added all of our bits in individually, so when we finally heard it all together, we thought, “Wow, that’s the sound we’re after.” It was different and we had success.

Q: Who decided what tracks made it onto the album?

M: Simon (Cowell) was instrumental in this, he ultimately chose the music he wanted to see on this disc. However, our rendition of Frank Sinatra’s “My Way” was decided upon by myself, Urs, Sebastian and David. One day, we were randomly rehearsing and we decided to sing this song for fun. We ended up really liking how it sounded, so we dropped by Simon’s office and performed it for him, right there. Simon loved it and it ended up making the cut. Our second album will be full of original material. Sebastian is a fantastic writer and we’ve already sat down with the guitar to come up with some really wonderful lyrics. So stay tuned!

Q:What are your inspired by?

M: Looking at you (laughs again). No, I’ve been involved in music since I was eight years old. I had my first record out when I was ten, so it has always been a part of my life. Music and singing are my life. Whether it’s my involvement in the opera (Carlos Marin has received high acclaim in Europe for his leads in Les Misérables, Man of La Mancha and La Traviata) or musical theatre or now, this. I wanted to move forward in my career, I took a chance with Il Divo and now I’m here and loving the experience.

Q:Although the music on your CD varies in style, there is one continual theme — romance and love. How come?

M: Everyone feels connected to romantic music, everyone can relate to it. What can I say? I’m Spanish, a latino lover! I love to sing love songs, I’m a very romantic guy, but I’m not a…what do you call it? A “player”? You must have love in life.

Q:What does “Il Divo” stand for?

M: The literal translation is “Divine performer”. Simon came up with this name as he wanted to make sure it would signify the opera. When you’re at the opera, it’s common to hear people yell “La Diva, La Diva, La Diva!!”, so Simon wanted to stay true to that. Even though we are a four-piece band, we all try to sing as if we were one “Divo”.

M: We’re now starting to work on our second album and hopefully it will be released in October/November 2005. Our world tour is slated to kick off at the beginning of 2006.

I miss the stage, I miss performing, so I’m looking forward to getting back into it!

For more on Il Divo, please go to www.ildivo.com