Hairspray: ELLE sits down with its stars!

Hairspray heroines chat about their big dreams and even bigger hair. 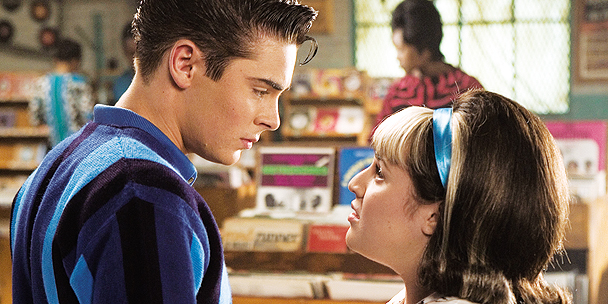 From a low-budget cult film to a Tony-winning Broadway musical to its most recent incarnation as a Hollywood blockbuster, Hairspray proves that it is both a charming and timeless tale of self-love and racial tolerance. Set in Baltimore in the early ’60s, the story revolves around some teens who fight racism with rock ‘n’ roll. At the centre of this camp-fest is Tracy Turnblad, a plump teenager whose dream is to appear on the Corny Collins Show, a local televised dance party.

Much to the surprise of Tracy, her parents and especially her nasty blond nemesis, Amber Von Tussle, Tracy gets her wish and steals not only Amber’s starring spot on the show but also her boyfriend, the hunky Link Larkin. Still, Tracy’s feud with Amber becomes overshadowed by a bigger struggle over segregation, and she ends up leading the fight to allow black kids and white kids to groove together on live TV.

Tracy’s overnight success story resonates with Nikki Blonsky, the previously unknown singer-actor from Long Island who landed the role after a five-and-a-half-month search. Blonsky was told the good news at her after-school job at an ice-cream shop in Great Neck, N.Y., by an Entertainment Tonight film crew.

“They told me they were doing a behind-the-scenes segment with each of the four finalists,” Blonsky recalls. “Little did I know that they were really only coming to me to tell me that I got the part. I was so excited — it was the feeling of all my dreams coming together at once.” The 18-year-old leads an all-star cast that includes John Travolta as Tracy’s mother, Edna; Christopher Walken as her father, Wilbur; Amanda Bynes as her best friend, Penny Pingleton; Queen Latifah as Motormouth Maybelle; Zac Efron as Link; Brittany Snow as Amber; and Michelle Pfeiffer as Amber’s mother, Velma. Both Blonsky and Bynes — a more seasoned performer with acting credits on She’s the Man, What a Girl Wants and All That — were awed by the cast, which also includes cameo turns from the original Hairspray director, John Waters, and his iconic Tracy, Ricki Lake. But there’s no doubt that it’s Travolta’s kitschy turn as the bigger-than-life housewife that is generating buzz. Previous cross-castings with drag diva Divine and Harvey Fierstein set a high bar, but according to Bynes and Blonsky, Travolta nails it.

“Nobody could take their eyes off John, because he’s such an icon,” says Bynes, 21. “He has these beautiful blue eyes, but he was dressed up in women’s costumes, so it was weird at first. He looks like a lady! That’s what makes him a star, I think — being able to play a role like that. That’s what makes him special.”Blonsky was equally smitten with her on-screen mother. “He gives off this incredibly gentle, sweet, kind vibe, and you just want to be with him all the time,” says Blonsky, laughing. “When John walked on-set as Edna, it was like, ‘Oh, my God, he’s the perfect mom!’”

On the surface, Hairspray might seem like a frothy, frivolous concoction, but its deeper themes of self-acceptance and tolerance resonated with both Blonsky and Bynes. “As much as it is set in 1962, we still deal with a lot of these same issues today,” says Blonsky. “I researched the historical events that were happening at that time in the city, and it helped put a new spin on it for me. Prejudice is still an issue we have to deal with. It was great to play a character who deals with it first-hand and who wants to help. I’m just so honoured to be playing a character who believes in the same things that I believe in.”

“It was really cool to be able to play a character in a different time,” adds Bynes. “I wish I was still in the 1960s now, ’cause it was a simpler time. Everybody kind of grooved to music, and it just seems like it was a fun time to have lived. Plus, it’s a great story, and the message still really matters today — you know, about how it doesn’t matter what you weigh and that love doesn’t care.”

While L.A.-raised Bynes has appeared in lots of movies and plays, Hairspray is her first movie musical. “It wasn’t more challenging — just different,” she says. “I had to rehearse not just the acting but also the singing and the dancing as well. But I think that when you like to act, singing and dancing are in the same vein, you know? So it was fun. Actually, it was more fun than just acting. I wish I could do it all the time.”

Bynes’ next film is Sydney White, due out next year. “It’s based on Snow White, only instead of dwarfs they’re dorks — goofy guys in college,” she says. “I’m growing up, and it’s cool to be getting roles in college movies now.”

Even so, neither Bynes nor Blonsky is planning to actually go to college anytime soon. “It’s hard when you’re doing what you want to do and there’s so much competition,” says Bynes. “There are so many people who would jump at roles, so I don’t want to give up this opportunity I’ve got right now.”

“I’m happy where I am, doing what I’m doing, so why stop now?” echoes Blonsky. “I just want to make more great movies and play more characters that mean something, not only to me but to the audience. I’m not interested in college right now. University of Hairspray — that’s where I’m going!”