June is finally here, and along with the much-awaited balmy weather, a trio of fun, fizzy, gender-friendly films have been generating heaps of hotly anticipated buzz. 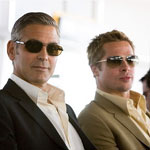 It may have all the trappings of a chick flick, but Knocked Up may be the one film you won’t have any trouble dragging your significant other to see this month. Grey’s Anatomy sweetheart Katherine Heigl stars as Alison, an ambitious TV production assistant whose big break as a reporter leads to a night of hard partying, a hasty hook up with Ben (Seth Rogen) and an accidental pregnancy. Penned by the same team that brought you The 40 Year Old Virgin, director Judd Apatow has proven his ability to meld raunchy locker-room humour with a surprisingly tender moral center. This time around, Apatow goes beyond his previous territory, embellishing his signature rom-com formula with sharp satire, snappy dialogue and a dose of stark reality. (Think raging pregnancy mood swings and even a birthing scene that features a crowning baby.) Listed prominently on a majority of critics’ summer must-see lists, expect this tale of a one-night stand gone terribly wrong to see Virgin-sized box office receipts, and the possible title of sleeper comedy hit of the season.

Fresh from creating pandemonium in Cannes, Stephen Soderbergh is back with his third installment of the modern day rat pack caper. This time around, Danny Ocean (Clooney) and his loveable band of hunky pranksters set out to hatch the ultimate casino heist. The target: Vegas kingpin Willy Bank (Pacino) who cheats beloved mentor and member of the original Oceans eleven team Reuben Tishkoff (Elliot Gould) out of his share of a lucrative hotel deal. Don’t expect the same languorous, party-like-it’s-1999 feel that filming at Clooney’s villa in Lake Como brought to Ocean’s Twelve. This was filmed far less decadently on a studio backlot in Burbank. Yet returning the action back to the shimmering setting of Vegas earns plenty of points, not to mention, that rakish, in-the-know banter that goes down as smooth as a gin martini. And of course, with George, Brad and Matt on hand to freshen up the scenery, we’re putting all our chips on this welcome guilty pleasure.

Although the original may not have received the best of reviews, we’re thinking this sequel could very well find its footing after laying the groundwork with such pesky details as relationships and character development the first time around. With its blend of yummy eye candy in all different varieties: The Cocky Heartbreaker (Evans), The Hot Nerd (Gruffudd), and the Sexy Bad Boy (McMahon) — not to mention some much needed girl power (Alba), this seemingly geeky comic-book flick may just be the one film you can get behind at the box office when it’s his turn to choose.

Take our boyfriend quiz and find out which celebrity hunk is your match!