ELLE shares some of its favourite music recommendations! 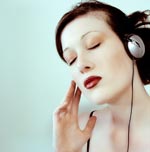 James Blunt
Growing up in a music-less household (think Footloose) didn’t deter former British army officer from being able to make a transition into the music industry.

On his debut album, Back to Bedlam [Atlantic], Blunt delivers a fatalistic, poignant and stunning landscape of songs that have the likes of Elton John singing his praises.

Curently #1 on the UK album charts, songs like Goodbye My Lover and No Bravery are heart-melting tracks, and according to Sir Elton, You’re Beautiful is the successor to Your Song.

Divine Brown
Canadian insiders have known of this talent for years. Now the rest of the world can fully realize what a national treasure we have in this sultry R&B chanteuse.

Her sound runs the gamut from Aretha Franklin to Chaka Khan and her 5 octave range can rival the vocal hysterics of Mariah Carey and Whitney Houston. Her self-titled album [Blacksmith Entertainment] is a medley of throw back doo-wop, slow jams, and sensual dance fare. Highlights include Pull My Hair and Somethin’ ‘Bout You.

Dave Matthews Band
They say you can never go home again. That may be true, but the new Dave Mathews Band album shows that you can get a glipse of home when you need it most. While a lot of diehard fans have been lamenting DMB’s last couple of albums, Stand up (RCA/Sony/BMG) showcases that Dave and crew can still make magic. Although his voice is now permanently gruff, the songs are definitely a throwback to vintage Dave, with Dreamgirl leading the pack.

Missy Elliott
You’d think there would be some sort of competition for a female MC in today’s music game, but there’s only one reigning queen of hip hop, and her name is Missy Elliott. Being number one means you only roll with the best, and Elliott is joined by contemporaries like Ciara, Pharrell, Mary J. Blige and old-schooler Slick Rick on her latest juggernaut, The Cookbook. (Atlantic/Warner Music Canada), a continuation of her dance-floor-filling living legacy.