Girls who are killin' it 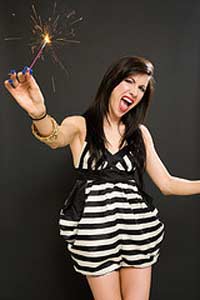 Much like Liz Lemon popularized "That’s a deal breaker" I’m going to attempt to come up with a little ellecanada.com catchphrase of my own. In the wake of M.I.A, female rappers are embracing the current lack of representation and bringing forth their own brand of hip-hop. Well, hang on a sec, I don’t know if we can call it hip-hop can we?  Some of it is hip-hop and some of it is pop so maybe it’s pop hop. Yes, you read it hear first, a brand new genre of pop hop is emerging from female artists around the globe specifically with Santigold, Amanda Blank and Toronto’s own Melissa Cameron (aka Missy Cam).

These girls are taking their talent, drive and style and whipping it into a funnel cloud of cool. So here it is, the catchphrase that’s about to sweep the nation, or at least Swiffer it. All of the aforementioned ladies are "just killin’ it". Ok, maybe it’s not exactly a Borat or Napoleon Dynamite caliber catchphrase, but it’ll do.

When talent surrounds you there’s no doubt it’s bound to rub off. Amanda Blank is part of a circle of peers and collaborators who are creating an ecosystem of new music. Kind of like a hip-hop Broken Social Scene, minus all of the facial hair. Amanda Blank first recorded tracks with friend and producer Spank Rock. If you haven’t heard her rap on "Bump" from Spank Rock’s ’06 album
YoYoYoYoYo – you should. Aside from being gorgeous, Blank can spit rhymes faster than you can think of them. The best line of the song, (courtesy of Blank) is, "I rock like Kelly Bundy yo, I keep that s**t nasty", and that she does! The oft foul-mouthed cutie sings what’s on her mind and isn’t afraid to express herself with more than cheesy rhyming similes. Blank just released her first album
I Love You on Downtown Records. You would think with a title like that, the record would be weepy ballads but not so. In fact, I could only really recognize 2 love songs on the album, unless I’m completely misinterpreting the other songs, which isn’t entirely impossible (for years I thought Salt N’ Peppa’s  "Push it" was "Mush It").

Just coming off a tour with friend and collaborator Santigold, Blank is positioned to fill a female rap void left my Missy Elliot, L’il Kim and Eve.  This girl is just killin’ it.


More rocking artists on the next page …

I’ve already mentioned Santigold in my October reviews from last year, but I feel it’s my duty to beat this incredibly lively mare to death. For those in the know, Santigold isn’t a huge secret.

Santigold (born Santi White) began her music career as an intern at Ruffhouse Records. She parlayed that gig into a job as an A&R scout for Sony, a dream job in itself. Her resume of collaborations and accolades is 20 pages long but all you need to know is that this young chanteuse is a rising star, a sentiment solidified when she opened for Coldplay’s world tour in ’08.

Santigold is a sound not easy to describe. While she is most definitely a rapper, her sensual harmonies and haunting melodies are as soft as her rhymes are hard. With the use of synthesizers, some new wave nostalgia and dancehall beats it’s easy to see why the Santigold buzz is becoming deafening. To see her live is pretty damn cool too.

Oh and just so you know, she used to be known as Santogold but because of some weird lawsuit stuff, she changed to Santigold. It doesn’t really matter, what matters is that she’s a young woman with unique style and talent who is just killin’ it.

Sometimes the greatest talents are right in front of your face and you don’t even know it. I attended the Over The Top Festival, here in Toronto a couple of weeks ago and was introduced to a local hip-hop act wordPeople. Melissa Cameron (aka Missy Cam) caught my ear right away and reminded me of a younger, far less weathered Fergie. As the vocalist in this indie rock rap band, Cameron steals the show with her heavy vocals and natural range. Emcee ape.X certainly holds his own while Cameron weaves in and out of his rhymes like a pro. If you’re looking to hear some cool Canadian music, bubbling under the radar this summer, try out their debut album
People’s Eatery and let me know what you think. Missy Cam is undoubtedly on her way to killin’ it.

If you have any female artists that you think fall into the ‘killin’ it’ category, let me know at
[email protected].

How well do you know Britney Spears?