Girl from the North country 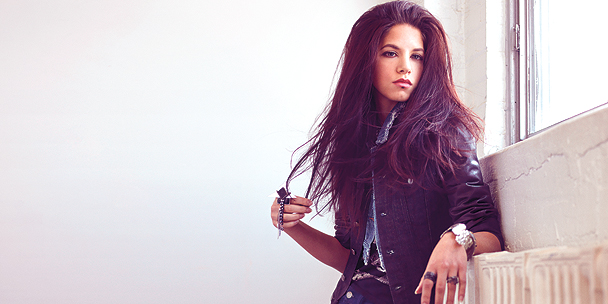 Imagine for a moment that you are photographer Caitlin Cronenberg. (This won’t be a painful exercise.) Your father is world-renowned director David Cronenberg. You grew up ingesting Hollywood glamour from a sippy cup. You walk red carpets and sit in the front row at Fashion Week. You’re regularly featured on national “Best Dressed” lists because, aside from being young and hot, you happen to have amazing clothes. What would
your Canada look like?

Answer: Not much like the mooseand snow-ridden one fixed in the minds of millions of Americans. This month, Cronenberg presents her version through
RED, a public exhibition of photographs culled from the
New York Times’ expansive Canadian Photo Archive. As curator of the show, she had the opportunity to explore the archive—largely the font of those clichéd images—and then use it to express her contrasting vision of the country. “I really wanted to pick photos that are a slice of how I think of Canada: a little bit edgy and a little bit daring,” she says. “I didn’t want to pick the ones with all the syrup and fur.” Surely Cronenberg was enticed by the odd igloo. “There were no igloos!” she counters, laughing. “But there was a
lot of frozen tundra. And horses, flannel and beer.”

More with Caitlin Cronenberg on the next page …

Cronenberg spent hours browsing the archive, a collection of 24,000 images taken by
New York Times staff photographers over nearly 100 years. The pictures she selected largely feature homegrown celebrities whom she describes as “brave and daring Canadians who just had some balls.” Each of the 26 chosen photos will be displayed in a case designed and constructed by Cronenberg and her assistants. (“I love to build,” admits the ingenue. “I actually like to grab tools and create things out of wood.”) They worked solely with reclaimed wood—fittingly, an old barn was sacrificed for the purpose.

RED: A Preview Exhibition of the NY Times Canadian Photo Archive will run during this year’s Toronto International Film Festival (TIFF), the annual circus that has formed the nexus of Cronenberg’s professional and social calendar for years. “I think I’ve experienced TIFF from every possible angle,” she says. “I’ve listened to the publicists screaming, gone to some galas and worked shooting the parties. But this year will be different.” Because she’ll be contributing as an artist? “Because the amount of dread I feel moving toward September is completely minimized— I’m excited about this project instead of just thinking ‘Oh, man, I’m not going to sleep for three weeks.’” Imagine that.