Why Diet Coke Just Got A Huge Makeover

The iconic beverage is changing things up in a big way. 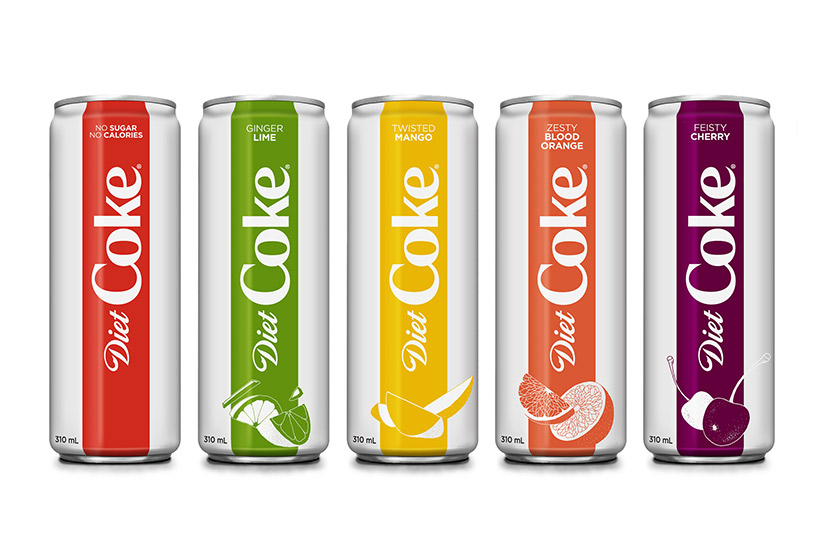 Full disclosure: When I was given the chance for a sneak peak sample of Diet Coke’s latest innovation, I was skeptical. In fact, as the slim silver can was cracked open in front of me, the words “Twisted Mango” emblazoned above the iconic logo, I was ready to break out my politest “oh, that’s…interesting” and consign the drink to the ranks of other novelty flavours that are intriguing in theory, just weird in actuality. (Looking at you, popcorn jelly beans). But then…it was actually, like, delicious. Smooth, a little creamy, and yes, mango-y, a bit like a traditional Indian lassi and a sparkling soda had a beverage baby. If we’re really feeling pretentious (and as someone who grew up drinking DC at my mother’s knee, I feel entitled), it has a comparable “mouth feel” to Diet Coke with Vanilla.

In fact, pleasant surprises were the order of the day on the occasion of Diet Coke’s big new rebrand. First, a reassuring bit of news. They weren’t messing with the classic formula (Coca-Cola is VERY aware of how, uh, passionate Diet Coke fans can be), and bar a makeover of the can itself (more on that later) it’s business as usual when you crack open a cold one.

“Nothing was wrong with the brand,” says Carolyn Harty, group brand director of sparkling beverages for Coca Cola Canada. “It’s our number one selling no calorie brand. But after 35 years, it was time to modernise the brand and bring it into 2018.”

It’s a “refresh” over two years in the making. “It’s been a journey,” says Hardy. “We’ve really stepped back and asked what consumers fundamentally want, and feeding that into inviting a new generation of drinkers to try Diet Coke.”

And that new generation (a.k.a. millennials) are who this relaunch is bulls-eye targeted at. (Even the launch party I attended in NYC was a young folk’s playground of selfie opps hosted by Insta celeb Girl With No Job).

“We wanted to put a twist on our innovation process this time,” says Schwartz. “We really wanted to co-create this with millennials, so we did the focus groups and ethnographies, which are standard practice for Coca Cola, but we also did some cool things.” Example: A “hot house” where the company hosted influencers for three days of intensive brainstorming, and another event in Atlanta where another group played around with flavours, guided by a professional mixologist.

This feedback was all combined with their in-house research and development team’s “insights on marketplace trends like spicy and herbal notes and superfruits” and resulted in an initial 30 possible flavours, says Schultz. They were ultimately narrowed down to the four that will be permanently available alongside the un-messed-with original Diet Coke.

“There were some interesting ones,” says Schultz of the 26 flavours that didn’t make it past consumer testing. “There was watermelon jalapeno with that spiciness that’s popular right now. There was a non-alcoholic mojito flavour with notes of rum, mint and lime that was great. We even had a honey lavender tea that was delicious. I had a lot of heart for that one!”

In addition to these four new flavours, the biggest change is of course the packaging. Gone is the somewhat squat can in favour of a “sleek” (that’s an actual industry term) taller container, and the familiar logo has been re-imagined so it’s less old-timey cursive and more bold and graphic. Getting to that place was also a process of many, many iterations and experiments.

“At one point, we had over sixty designs,” Schultz says, adding they spanned the gamut of fairly close to the existing look and others that were “way far out”, which is initially the direction that they thought they were going to have to go in. “But what we heard back from consumers was that we need to stay true to our roots. We were Diet Coke, and that was awesome. That was surprising because we thought we were going to have to pivot a lot more than we did.”