From Toronto's best burger joint to their go-to bar. 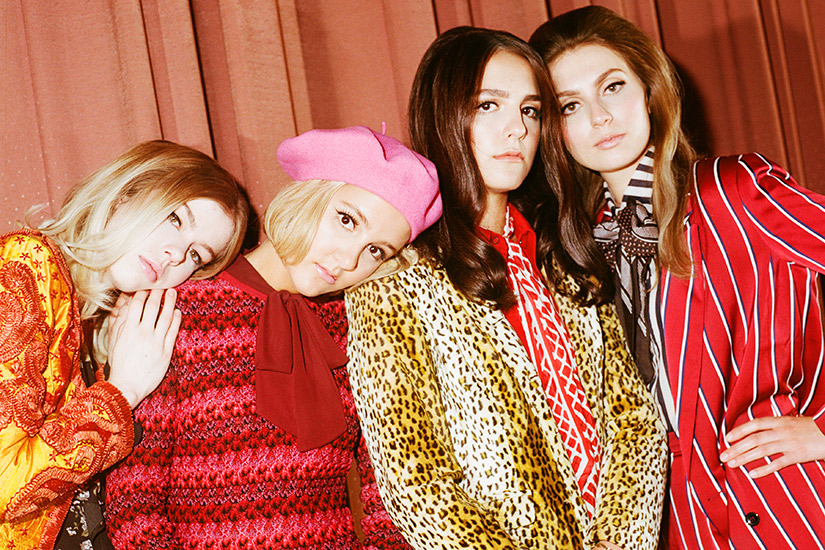 Toronto-based rock band The Beaches are making the most of their 2018. After releasing their debut full-length album (which was co-produced by Metric’s Emily Haines and James Shaw) late last year, the group recently took home a Juno Award for Breakthrough Group of the Year. They then jumped on the road for their first-ever national headlining tour this spring. Later this summer, they’ll be performing for the crowds at Montreal’s Osheaga Festival.

Composed of sisters Jordan and Kylie Miller (lead vocals/bass and guitar, respectively), Leandre Earl (on keyboards, guitar and backing vocals) and Eliza Enman-McDaniel (drums), the all-woman group takes their name from the T.O. neighbourhood where ¾ of them grew up (Bloordale native Leandre joined the band after they had already claimed their name). “We were lazy,” Kylie jokes about coming up with the moniker. “We all met in the Beaches, so it has a special closeness to our hearts.”

Now back home from tour, which wrapped up with a sold-out hometown crowd at The Opera House, we caught up with Kylie, Jordan and Leandre to chat about their fave spots in the city.

“It’s not the best diner [in the city], but it’s home to me,” Jordan says. “It is the quintessential diner in the Beaches. It’s a nice place to go and meet, and the food’s cheap and consistent and it’s run by some nice people. They make the best cold chicken with lettuce sandwich, and I have gotten it every time I’ve been there since I was six.”

“We definitely spent a lot of time there,” Kylie adds. “After our guitar lessons—which was one of the main reasons [Jordan and I] started songwriting in the first place, we would go to the Goof with our mom. It was a tradition.”

“The burgers there are unreal,” Leandre says. “It’s the closest we’ve got to In-N-Out, and we love In-N-Out.”

“It’s very dive-y inside, but the food is absolutely amazing.” Kylie explains. “Emily [Haines] and Jimmy [Shaw] from Metric actually took us there for the first time. It’s like a musician-slash-chef’s secret hideaway spot.”

The band’s’ go-to order? The Plain-Jane Burger, which comes with onions and ketchup, plus they add lettuce and tomato.

“I go to this place with my mom,” Kylie says. “They have these little booths and you can put a curtain down and it’s very private and super nice.”

When the band is hard at work in their Leslieville studio, they run around the corner to the French café to pick up some roast beef and brie sandwiches, which Kylie calls “the best sandwich in the city.”

Sharing is a must at this Christie Pits-adjacent resto, with the band listing off butter chicken, garlic naan, paneer, vegetable daal, pakora and mango lassis as their typical spread.

Asteria—not Astoria, a similarly named Greek joint also on the Danforth, the sisters are sure to point out—has a special place in their hearts. The owners are from Welland, Ontario and went to high school with Kylie and Jordan’s (who are Greek-Macedonian) dad. “We normally get the chicken souvlaki dinner, and then we get saganaki, tzatziki, lots of pita and lots of garlic bread.”

According to Leandre, this Koreatown spot has great sushi and bibimbap. Jordan also loves the bulgogi with kimchi.

“I get the ginger molasses, warmed up. It’s beautiful,” Leandre adds.

“It is my favourite place in the Beaches. It makes me happy,” Kylie says. “They have the best homemade ice cream that I’ve ever had. Nothing compares to it. They have really amazing flavours that are seasonal and the staff is super nice. And, again, it’s just nostalgic. We used to walk there with our dogs in the summer and go get ice cream on Saturday nights. It’s a very special place to us.”

The flavours you’ll definitely want to get a taste of? Fan-favourite Burnt Marshmallow, the Christmastime staple eggnog and Kylie’s personal fave, Mango Tango.

The band loves this Leslieville spot for its ambience and excellent snacks (they gravitate towards the bone marrow, steak tartare and oysters). “They do an excellent dry martini. The strongest drink they’ll get is, like, a vodka spritzer,” Jordan laughs. (Kylie says her actual go-to cocktail is a rum-and-ginger-based Dark ‘N’ Stormy.)

“I have the gals over for pizza night at my house, we have that every Thursday,” Leandre says. “My parents make beautiful, homemade pizza and a little Korean food on the side. We all go over and drink lots of wine.”