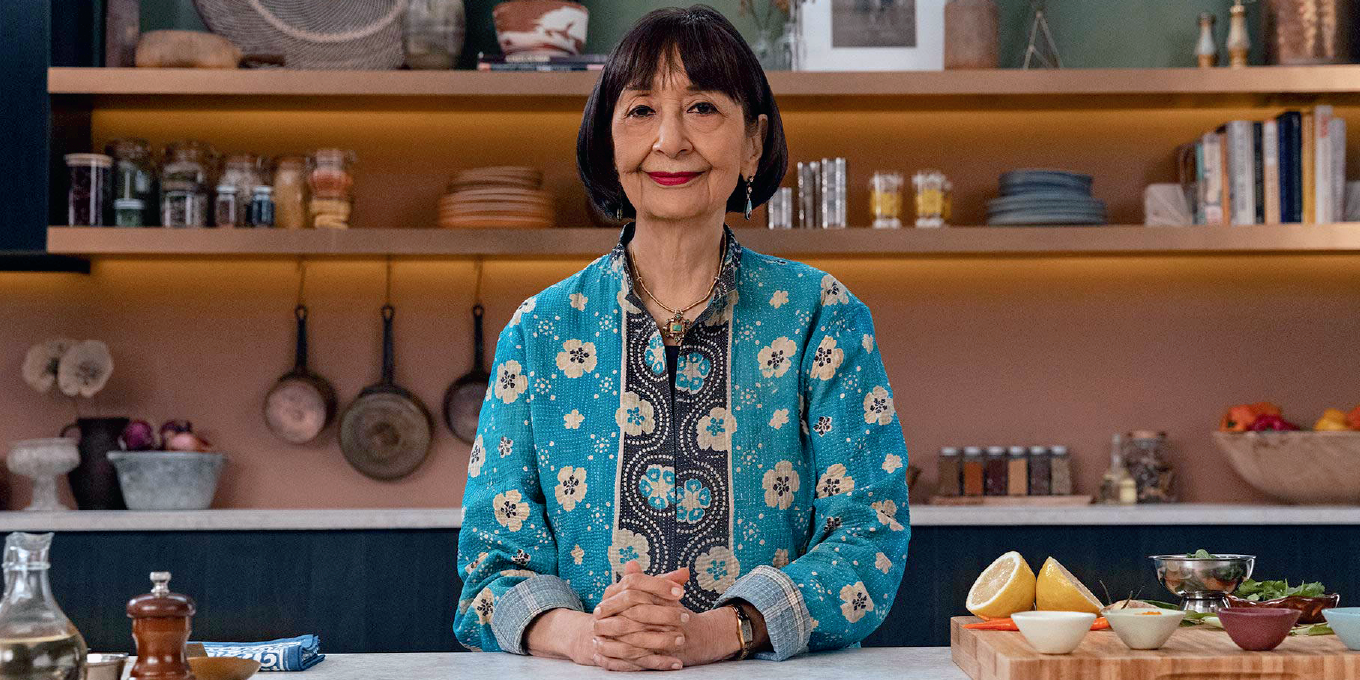 “Mum! Look there’s an Indian on TV!” I would shout with a combination of wide-eyed joy and disbelief every time I saw someone who shared my ethnic background on television. I grew up between two cultures, and being surprised by such an event was my sad reality as a first-generation brown kid in England. Madhur Jaffrey, however, was one of those rare people. Thanks to the success of the BBC’s Madhur Jaffrey’s   Indian Cookery, which started airing in 1982—before I was born—she has been ever present in my life. For more than 50 years, the legendary award-winning host, author and actor has been introducing regional Indian food to the Western world she moved from Delhi to the U.K. and then the U.S.—with poise and impeccable wit. When I moved to Canada and stumbled into a career in food, I found that the way I cook is, in many ways, inspired by the likes of Jaffrey.

With her 30-odd cookbooks, seven James Beard awards, multiple BBC cooking shows, honorary Commander of the Order of the British Empire (CBE) and newly launched MasterClass series, it’s easy to forget that food was the unexpected second of Jaffrey’s two careers—and a path almost entirely driven by her cravings. “I just hated British food,” a still-offended Jaffrey recalls of her early student days at the Royal Academy of Dramatic Art in London, England, when she was just 19. “I taught myself to cook with the help of my mother’s letters.” She was desperate for aloo gobi, heeng zeeray kay aloo and kharay masalay ka gosht—the comforting tastes that defined her childhood—while studying acting far from home. Today, it’s hard to imagine where the world of Indian cuisine would be without the O.G. author and the internet’s baddest nani. (Google Mr. Cardamom’s “Nani” video.)

The role Jaffrey has carved out for herself goes beyond enlightening a Western audience. For 36 million Indians living outside of India, the wisdom of “Madhur Aunty” bridged the gaps between cultures with recipes that stirred nostalgia and a strong sense of home. Her mainstream presence encouraged future generations to dream beyond racial stereotypes and embrace who they were, jumbled identities included. Jaffrey’s latest Padma Bhushan award—India’s third-highest civilian honour, which recognizes exceptional service to the country and its culture—for her contributions to the culinary arts celebrates just that.

Earlier this year, I spoke with the 88-year-old via Zoom from her home in New York City. We discussed how some intimate food connections are created by war, why the Western way of using turmeric is all kinds of wrong and the future of Indian cuisine in North America.

When I was growing up, there weren’t many brown faces in mainstream media. Did you ever feel the pressure of being one of the first on TV, particularly from the Indian community?

“I never felt pressure because I was in my home cooking and writing. I never imagined a world of people cooking from my  books—I just imagined small families cooking for their children because that’s how I’ve always done it. I have had letters from three generations in the same family who’ve grown up with my food—I find that very pleasing and satisfying.”

So, who were you writing that first cookbook, an invitation to Indian cooking, for in 1973?

“Half for myself, really, and half for, say, an American friend [to explain] what Indian food is. I didn’t know what was going to work and what wasn’t, but [I explained] it so thoroughly that they could not go wrong. I think perhaps that was what made it successful. I look at my old recipes and recipes [from] today, and there’s no great difference.”

And you’ve written so many cookbooks.

“I know—I keep writing them. I’m in the middle of two right now.”

How many is that now?

Do you think Indian food is underrated?

“I don’t care what other people think! I love it. If I compare it to other cuisines, I will say it is one of the greatest. It’s not the only one: Chinese, Italian, French, Korean, Malaysian. . . I love all these cuisines, but I think [ours] is one of the great cuisines in the world.”

Can we talk about how Indians use spices?

“As I say in my books, we are like painters—like magical painters with spices. The West has, for example, adopted turmeric like drunken idiots. They just put turmeric in everything. There is a way in which you enhance the taste of a dish and the food value of a dish by [using] turmeric, and we do it in the correct way. It ’s from years of learning. We have assimilated that from mother to daughter, then daughter, then daughter. But what I don’t like is how [white people] just throw [spices] in without any sense of their medicinal value or the correct way to bring out their flavour.”

What are some of your other pet peeves? I’m guessing you have many.

“That [people think our food is] hot. People don’t remember that chilies only came to India [around] 1498. [Before that], we only had black pepper and mustard—those were our hot spices. My father never liked hot food; he never ate it. So, there are Indians who don’t eat chilies; chilies are relatively new to us.” 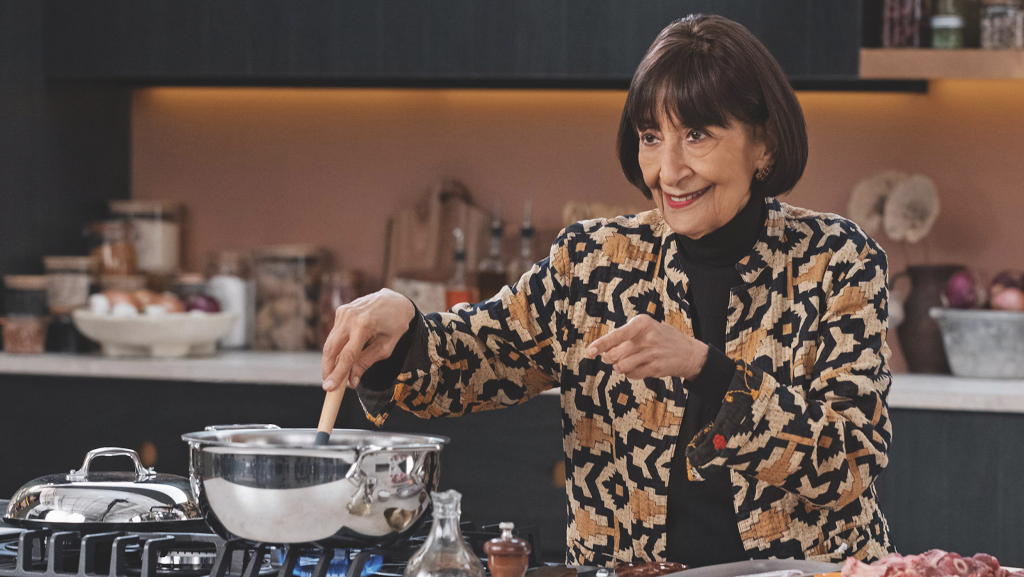 And how about the word “curry”? [“curry” is a generic term the British started using to describe all Indian food.]

“I fought that one for a long time and [have] given up. People [can] use it, not use it—never mind, I’ve given up.”

Speaking of curry, last year, The Washington Post ran a story by writer Gene Weingarten about foods he won’t eat. He said he didn’t get Indian food as a culinary principle and that it’s “the only ethnic cuisine In the world insanely based on one spice,” meaning curry powder—a misconception that’s another colonial construct.

[Laughs] “And they let it go through?”

They did. Then, on behalf of 1.4 billion people, Top Chef host Padma Lakshmi took to Twitter and told him to “kindly f**k off!” Many still don’t understand India in terms of its cuisine and how diverse it is.

When you’ve written so many books trying to teach people about Indian food, is it frustrating that they still get it so wrong?

“It is frustrating. [In North America], they’re not eating Indian food—it’s not really Indian. They’re making it up and thinking it’s fine.”

But how can we shift perceptions for those outside of the diaspora?

“Learn from [my] cookbooks; learn from going there and seeing the variety. But just taking little bits of it and putting it in a recipe is not a knowledgeable way to cook [Indian food].”

I think it’s such a shame that North America doesn’t understand how much the foodways vary there. It’s hard to view India as one country.

“It is like Europe [in terms of size]. The cuisines are as different as Spanish and Italian foods are. It’s amazing. My latest feeling is to let sleeping dogs lie! If they discover Indian food, they will find wonders there. If they don’t, let them eat what they want to eat. I’m not going to take it to them. I’ll write my books for those who are interested.”

Who are some of the first-or second-generation Indians here that you’re impressed with?

“All of them, including you. I enjoy talking to everyone who is interested in any aspect of Indian food to see what they’re thinking, where they’re going and where their thoughts are taking them because that’s where Indian cuisine will go—Canada and America.”

Congratulations on your Honorary CBE and the Padma Bhushan Awards. That you were recognized by both England and India feels like hope to me—like we don’t have to choose to be part of one country or another.

“I think the same. I take that very much to heart because that’s how I felt. I belong in these different worlds; I can’t help it. I’m part of a three-nation triangle—these three nations are part of me.”

Any final bits of wisdom for us?

“Be unafraid and be honest—that’s all. Everybody’s thoughts, if they are deeply felt, are worth listening to. But not that gentleman in The Washington Post—he can go to hell.”