Available worldwide, this colourful French brand continues to stir up innovation in the kitchen. 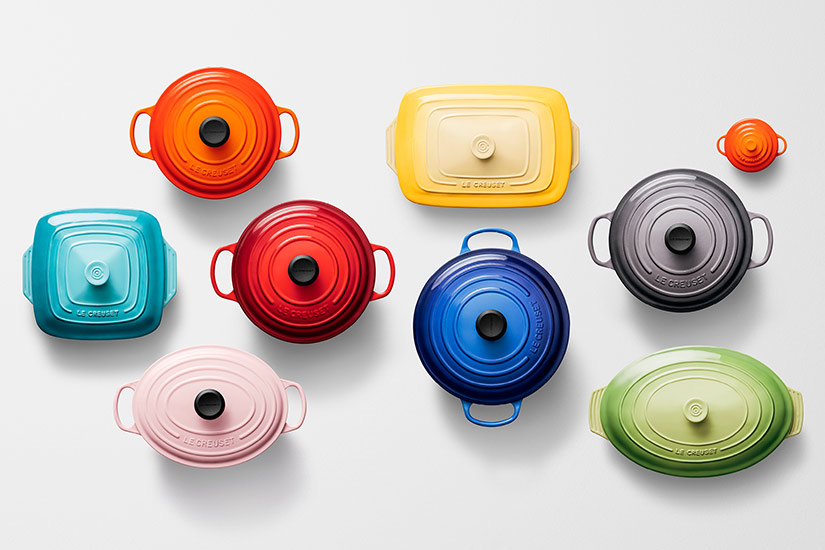 With so many incredible cooking shows on TV these days, it’s safe to say that the desire to experiment in the kitchen is at an all-time high. But what happens when, say, you braise a choice chicken in red wine — intending to serve up a gourmet coq au vin — only to find that half of it hasn’t cooked properly in your less-than-state-of-the-art pot?

Any foodie will attest to the fact that great food deserves to be made with the proper tools. Instead of trusting your dinner to cheap, run-of-the-mill cookware, reach for colourful — and famously resilient — Le Creuset. Why? As any self-respecting epicurean knows, the proof is in the pudding; or rather, in the thoroughly cooked coq au vin, or beetroot risotto or any of the myriad recipes Le Creuset products cook to mouth-watering perfection. Plus, their enamelled coating keeps food from sticking — so there’s no need to spend the rest of the night trying in vain to scrape the pot clean.

Even if you’ve never used a piece of Le Creuset cookware, you’ve probably seen it gleaming on the shelves of the higher-end shops and department stores and wondered how it came to be so highly recommended. Let’s look back at the past century to see just how Le Creuset cookware became the anchor of countless kitchens across the globe.

Le Creuset was founded in Fresnoy-le-Grand, France, in 1925. Industrialists Armand Desaegher and Octave Aubecq took a tough-love approach to cookware, insisting that it be made to the highest standard — even if that meant heating the iron to the unheard-of temperature of 2,862°C before moulding it. Appropriately, the “Flame” orange of this molten iron was chosen as their first, and arguably most famous, product colour. This design innovation refined (and redefined) cast iron cookware, making it beautiful as well as functional.

In the early twentieth century, restauranteurs and culinary writers such as Georges-Auguste Escoffier popularized the idea of upscale cooking at home, promoting the domestic kitchen as a place of pride. Additionally, with the advent of electric appliances (such as the refrigerator) in the 1920s, meal preparation slowly became more of a pleasure than a chore.

Then came the Second World War. The shortage of materials during this time was challenging for manufacturers of all kinds. Le Creuset survived; many others didn’t. Post-war, the company debuted not only new pieces and styles, but advances in colour technology that allowed them to experiment with new hues.

The next few decades saw a streamlining of the production process and a mass increase in global awareness. In 1966, Le Creuset modernized the manual casting workshop with semi-automatic machines. Cooks worldwide became more familiar (and enamored) with Le Creuset, resulting in international campaigns crafted specifically for consumers in different countries. One notable example is the cheeky 1980 U.S. campaign slogan, “Every good cook should know a little French: Le Creuset.”

Le Creuset is always at the forefront of culinary innovation. In the 1990s, they adapted rapidly to international cooking trends, introducing products like Indian Karahi and Balti dishes, the Italian Risotto Pot and the Spanish Pueblo line. Today, their range of enamelled cast iron products is impressively diverse, surpassing the iconic French Oven to include grills, fondue sets, woks, tagines, paella and pizza pans and more.

Every piece of Le Creuset cookware is individually cast in sand moulds that are used just once before being melted down and reshaped, ensuring a unique design every time. In addition to their famous enamelled cast iron pots, the company makes stainless steel and toughened nonstick cookware, stoneware, knives, wine tools, café tools (e.g., French presses) and kettles, all available in more than 100 different colours worldwide. Adhering to Desaegher and Aubecq’s demanding standards, at least 15 skilled specialists examine each product to ensure exceptional quality before it leaves the factory.

Desaegher and Aubecq didn’t invent Le Creuset to be the whim of a particular era. Their products are colourful and fun to look at, yes — but they’re also made to withstand the test of time. Though they carry a lifetime guarantee, don’t be surprised to see your cast-iron pot or casserole dish lasting several lifetimes. They adapt to the cooking needs of the moment, whether it’s a rushed late-night pasta sauce or an eight-hour braised shoulder of lamb with apricots and ginger, and are also crafted for long-lasting performance.

For nearly a century, Le Creuset has been part of the two best experiences families and friends can share: the intimacy of cooking together, followed by the celebration of enjoying that food around the table. After all, good food makes good memories. As acclaimed English author Virginia Woolf once put it: “One cannot think well, love well, sleep well, if one has not dined well.”