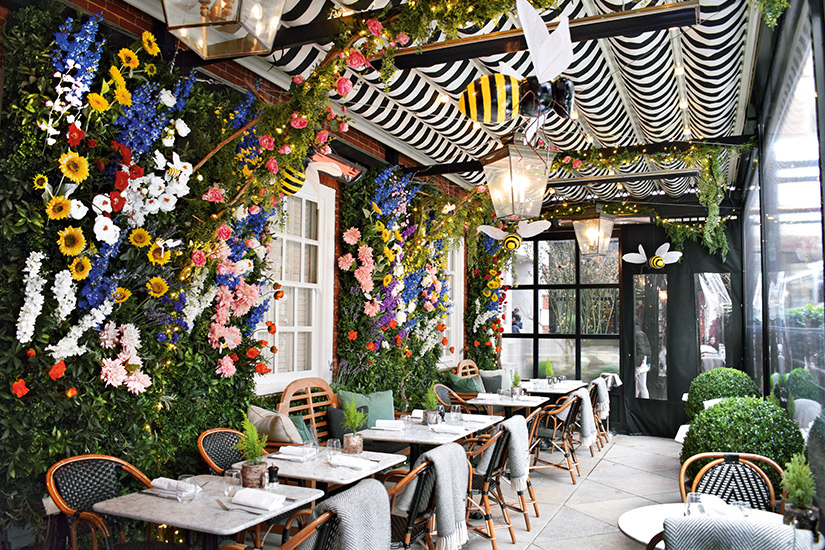 A post shared by Hotel Du Collectionneur (@hotelducollectionneur) on Aug 24, 2018 at 9:23am PDT

The three terraces at l’Hôtel du Collectionneur’s new eponymous restaurant are so liberally peppered with trees and plants that one could easily forget they are in the centre of one of the world’s busiest metropolises. Inside, the focus turns to texture and design: Marble tabletops, velvet sofas and luxe carpeting anchor the space. The menu (which changes weekly) is equally indulgent. It’s a mash-up of that legendary French gastronomy (hello, sweet darling cream and butter) and flavours from around the world: prawn ravioli with beans; sea-bream sashimi in a yuzu-ginger marinade with pickled daikon turnip; vegetarian cannelloni with zucchini and mushroom caviar and a Parmesan dressing. Magnifique, non?

The simple neo-Georgian exterior of the Bloomsbury belies the grandeur of the recently renovated luxury interior. It’s how I imagine all well-appointed British homes are decorated—with a strategic use of floral wallpaper and vibrant paint alongside cozy seating that creates a living-room-like vibe that says “Sit down and stay awhile.” That sentiment is especially true for the hotel’s eating spaces, which include a restaurant, two bars and a juicery. At the Dalloway Terrace restaurant, wicker chairs and marble-topped tables are backed by a wall of flowers that runs from the floor to the black-and-white tented ceiling. The Coral Room is, well, very coral and the ideal spot for a long, boozy brunch. The dimly lit basement bar feels wonderfully conspiratorial; drinks are named after the 20th-century writers and artists who made up the scandalous Bloomsbury Set, which included Virginia and Leonard Woolf.

Chef Casey Lane’s Breva is located within Hotel Figueroa. It was recently named a “Hotel Hotspot” by @foodandwine. #BrevaDTLA @brevadtla

As far as the ELLE Canada team is concerned, there’s only one way to beat jet lag: with comfort food. On a recent jaunt to DTLA, we ate plenty—including fried chicken with jalapeno potato salad, fries and braised greens—at Basque-meets-Mediterranean resto Breva. Helmed by L.A. super-chef Casey Lane, Breva is in the buzzy Hotel Figueroa. The boutique property, which opened in 1926, was restored into an urban oasis that melds its Spanish architectural roots with a sprinkle of gothic chic. Think exposed wood beams and Spanish tiles with quirky extras, like a coffin-shaped pool. Despite our long day of travel, we lingered at Breva for dessert—a mille feuille with honey-mascarpone cream—before falling into our king-size beds, dreams of carbohydrates dancing in our heads.