Why are married couples so interested in my dating life? 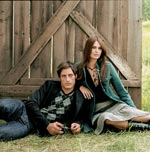 I went on a date the other night — the first in my life, as a matter of fact. I met my now ex–husband not on a date when I was 17. The marriage ended some time ago and, anyway, the bottom line is, I went on my first date a few weeks ago, and ever since then my phone has been ringing off the hook.

My friends Robin and Hendrick called first, wanting to know how it went. Then Dan and Carol. My date called twice, so sweet, although I had to hang up on him both times when I got calls on my other line. The first time it was Tim and Jane just checking in, which I was sort of expecting, and then I got call from a voice I didn’t recognize.

“Hey, how are you? It’s Rob.”
“Rob?”
“Yeah, Robbie Henderson. I was in Grade 10. You were in Grade 9. You joined the swim team just ’cause you had a crush on me.”
“Really?” I said. “Was I that transparent?”
“Hey, only in the white Speedo with the cross straps. Don’t worry about it, big hit in Lane 4. Anyway, so listen, sorry to call out of the blue like this, but my wife, Beth, Beth from the volleyball team, heard you went out on a date.”
“Yeah … ” I said, sitting myself down.
“Sooo, ” he said, “what’d you wear?”
“Um, my favourite Lydia K skirt,” I said.
“Bethy,” he shouted, “Tabatha says her Lydia K skirt — mean anything to you?”
“She’s a Toronto-based designer,” I said. “You can get her at Georgie Bolesworth …”
“Oh, that won’t mean a thing to Beth,” he said. “We’re calling from Yellowknife. But hold on a sec … yeah, honey … flats or heels? Beth is asking.”

There’s no detail of my date that is not of interest to a married person somewhere. I’m pretty much dining with a different couple every night of the week. Married couples, as everyone knows, live vicariously through their single friends. Married women like to suggest that I date the men that they really want to date and — I’m not sure if this is a failure of imagination or a joyous celebration of it — married men usually suggest that I start dating women.
“Did you kiss him?” Christine’s boyfriend, Ante, asked.
“Elena and Jorge think she did,” Christine called from the next room.
“How, exactly?” Ante asked.
“What?” I said.
“Okay,” he said, “cut to the chase. How much Scotch would I have to pour into you to get you to demonstrate on Christine?”
“Scotland in a glass!” I said. “That won’t happen, Ante. But, um, tell you what, pour me a double Dalwhinnie and I’ll tell you which panties I wore.”
“No you won’t!” called Christine. “Not till I get there.”

I hope I’m not exploiting my date, but, well, my friend Noah, he makes a rather fine Jerusalem artichoke soup, and Sarah said they’d love to have me round on Saturday, if I’m not too tired from the barbecue with Paul and Martha on Friday. Ian and Sue, great couple, have asked me to come bonefishing with them in the islands. Can’t say no to that now, can I? Ron and Diva are hosting a small gathering, just a dozen or so happily married couples, mainly working on Bay Street, and, of course, all just wanting to make sure I’m okay…not lonely? Actually, they’re wondering if I’m seeing anyone. Diva’s handling the tickets for that night. Sales, of course, are strong. The whole thing apparently is a breast cancer research fundraiser. We’re going to auction off the Lydia K skirt.
Did he see me home? Did he come inside? I’ll answer questions at the fundraiser … fireworks off the terrace, music. That sort of thing. Call Diva if you’re interested. And will I go on another date? They’ll all be asking. At the moment, I haven’t the time.